Astronaut Whitson To Be Inducted Into Iowa Aviation Hall of Fame 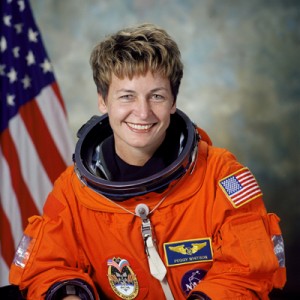 Beaconsfield, Iowa native Peggy Whitson will take her place beside other notable Iowans as a member of the Iowa Aviation Hall of Fame on Saturday, June 18, 2011 at ceremonies at the Iowa Aviation Museum at Greenfield Airport. There will be an open house in honor of Dr. Whitson at 1:00 pm, followed by induction ceremonies at 2:00 pm, after which Dr. Whitson will speak. Dr. Whitson is being honored for her contributions to the space program. The event is free to attend!

Dr. Whitson has accumulated 377 days in space, the most of any U.S. astronaut and 20th among all space veterans. She has performed a total of six career spacewalks, adding up to 39 hours, 46 minutes — more than any other woman. She is currently serving as chief of the Astronaut Corps, responsible for the mission preparation activities of all Space Shuttle and International Space Station crews and their support personnel. She is the first woman to hold this position.

Colonel George “Bud” Day will be inducted into the Hall of Fame on October 1.

George Everette “Bud” Day is a retired U.S. Air Force Colonel and Command Pilot who served during the Vietnam War, to include five years and seven months as a Prisoner of War in North Vietnam. He is often cited as being the most decorated U.S. service member since General Douglas MacArthur, having received some 70 decorations, a majority for actions in combat. Day is a recipient of the Medal of Honor, and is the only person ever awarded both the Medal of Honor and the Air Force Cross.

Other persons who have been inducted into the Iowa Aviation Hall of Fame include Eugene Ely, the first person to fly an airplane off the deck of a ship; Clarence Chamberlin, the first person to take a passenger across the Atlantic Ocean; Neta Snook Southern, the person who taught Amelia Earhart to fly; and Walter Cunningham, the first astronaut from Iowa.

For more information, contact the Iowa Aviation Museum at 641-343-7184 or email aviation@iowatelecom.net.