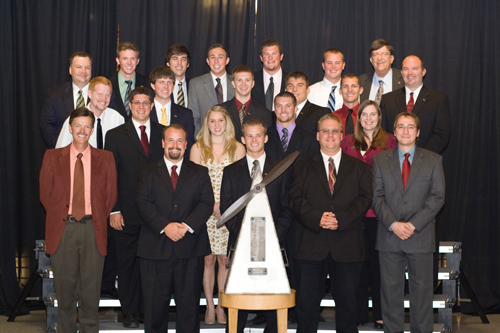 Placing fourth in 2010, the team finished second in the Region VIII championships in October, missing a fourth straight regional title by three points. Michael A. Carroll, a senior from Normal, Ill., one of three team captains, scored 121 of his team’s points himself n– a total that by itself, tied him for ninth place in team scoring. Carroll was the top-scoring pilot in the nation and finished second for the national top pilot award. The win won Carroll a scholarship to complete his studies in aviation management.

David A. NewMyer, department chair, said the national title provides the university’s already nationally recognized aviation programs with “very visible evidence” that they are among the nation’s leading aviation degree programs. “The national championship allows us to celebrate our aviation students,” said NewMyer. “They are the very best and this kind of performance under pressure shows the winning Saluki spirit is alive and well.”

After the Flying Salukis and North Dakota, Embry-Riddle Aeronautical University-Prescott was a distant third with 271 points, followed by Western Michigan University, 212, and host, The Ohio State University, 197 points.

The team competed in four Cessna aircraft, two Cessna 152s and two Cessna 172s, all owned by the University.