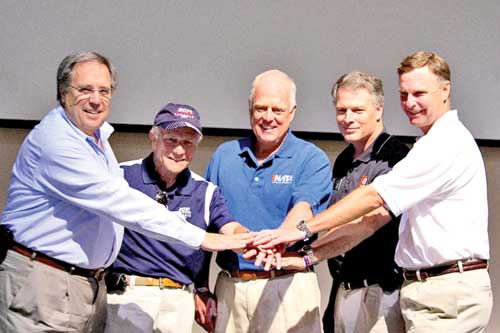 BROOKLYN CENTER, MINN. – The President of the National Air Transportation Association (NATA), Jim Coyne, will give the keynote address at the Minnesota Aviation Trades Association (MATA) and Minnesota Aviation Maintenance Technician joint conferences, Monday, March 19, 2011 at the Earle Brown Heritage Center in Brooklyn Center, Minn. Speaking before as many as 400 fixed base operators and aircraft technicians, Coyne will discuss the critical role aircraft maintenance technicians plays in the air transportation system, and how important recurrent training, like that provided at the conference, is to air safety. Coyne will be speaking at the luncheon beginning at 11:35 am.

Coyne will address fixed base operators and vendors at a dinner Sunday, March 18, in his honor, at which time he will provide an update on national issues, including any pending proposals and rule making. The dinner will be held at the Embassy Suites, located immediately adjacent to the Earle Brown Heritage Center. The reception begins at 5:30 pm. Dinner will be served at 6:30 pm.

After graduating from Harvard with a Master’s Degree In Business Administration, Jim Coyne became the CEO for his family’s business in Philadelphia and served one term in Congress in the 1980s.

In January 1983, President Ronald Reagan asked Coyne to join his staff as director of the White House Office of Private Sector Initiatives. For two years, he led the administration’s efforts in support of pro-business, private sector solutions to many of our nation’s toughest challenges, in areas like education, transportation, health care, public safety, and computer literacy. After the White House, he served as president of the American Consulting Engineers Council, the American Tort Reform Association, and Americans to Limit Congressional Terms.

In 1994, the National Air Transportation Association (NATA) selected Jim Coyne as its president and CEO. Coyne is an experienced pilot and aircraft owner with over 6000 hours in his logbook. He holds an Airline Transport Pilot Certificate.

As NATA president, Jim Coyne has visited close to 1,000 FBOs and aviation service businesses across the country. He also regularly presents the viewpoint of the general aviation industry before congressional committees, the Federal Aviation Administration, Transportation Security Administration, and other federal agencies. He works closely with NATA members across the country, as well as the other aviation associations in Washington. In recent years, he has worked to develop strong relationships with pro-business, pro-aviation governors and state legislators. Local aviation issues are equally important.

Jim Coyne serves on an airport commission and regularly helps airport managers and commissioners understand the importance of their fixed base operator and general aviation users and tenants. His efforts have led to the creation of aviation advocacy groups at airports across the country.

A lifelong aviation safety advocate, Jim Coyne serves on the Board of Governors of the Flight Safety Foundation and was the founder and first president of the Air Charter Safety Foundation.

Jim Coyne’s wife, Holly, is also an instrument and multi-engine rated pilot. Their sons, Sandy and Michael, are private pilots. Their daughter, Kate, and four grandchildren have yet to complete their flight training. The Coynes live in McLean, Virginia.

To register for the 2012 Minnesota Aviation Trades Association Conference, email Sara Wiplinger at swiplinger@wipaire.com, or call 651-209-7168.

Additional information is also available at the MATA website www.mnaviationtrades.org.

The joint aviation conferences make up Minnesota’s largest aviation event of the year, and include a large exhibition of vendors specific to aircraft maintenance and fixed base operators. For additional information on exhibiting, contact Janese Thatcher at 651-234-7183.