JANESVILLE, WIS. – The Blackhawk Technical College (BTC) Airframe and Powerplant (A&P) Technician Program has been suspended for at least one year following the 2012 summer semester. Approximately 70 supporters of the program attended the school board meeting held November 16, 2011 at BTC’s Beloit campus.

Newly appointed BTC President Thomas Eckert, who proposed closing the program, chaired the meeting. Opponents to the proposal included many former Blackhawk students who have gone on to successful careers in aircraft maintenance. They were concerned not only with the decision, but how quickly that decision was made and without dialogue. Others in attendance were representatives of major corporations in the area, including ABC Supply in Janesville, and Emery Air in Rockford, Illinois, which hire BTC graduates to maintain their aircraft.

Chris Anderson, a corporate pilot out of Milwaukee, Wis., was among those in attendance. Anderson has two brothers who graduated from the program and feels that losing it is a loss for the school, community, students, and aviation community.

The president of the Aircraft Owners & Pilots Association, Craig Fuller, wrote a strong letter in support of the program, describing the nation’s need for well-trained aircraft technicians, especially with so many technicians retiring. Fuller even offered to help publicize the program to AOPA’s 400,000 members. The president of the Experimental Aircraft Association, Rod Hightower, also expressed his concern.

The BTC A&P program started in 1949 with donated equipment and materials received from the War Assets Program and grew from there. The school did very little to promote the program in recent years and still had increased enrollment, in part due to the lagging economy in the Janesville, Wisconsin community, and the growing demand for aircraft technicians. Still, the program was said to have a budget shortfall of $369,000, not unlike any other state subsidized college program. The board also eliminated the school’s Leadership Program. 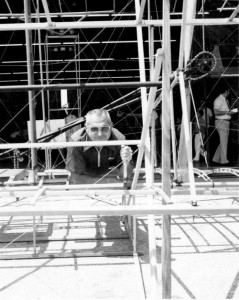 Blackhawk Technical College aviation department chairperson, Archie Henkelmann, demonstrates how the Wright brothers flew the Wright Flyer at an open house at the Rock County Airport (now Southern Wisconsin Regional Airport) in Janesville, Wisconsin in 1978. This replica aircraft was built by students and faculty at the college, and is now on permanent display at the EAA AirVenture Museum at Wittman Regional Airport in Oshkosh, Wisconsin. Photo by Dave Weiman

Those who visit the Experimental Aircraft Association (EAA) AirVenture Museum in Oshkosh, Wisconsin and see the “Wright Flyer” replica on display, can think of a great A&P program that was. More than 500 BTC students and EAA members built the historic replica over a 13-year period under the direction of then BTC A&P chief instructor, Archie Henkelmann of Janesville. The project was completed for the 75th anniversary of the Wright brothers’ historic flight, which took place on December 17, 1903 at Kitty Hawk, North Carolina, with Orville Wright at the controls.

A commemoration open house was held at the EAA AirVenture Museum on June 4, 1978, and also at the BTC Aviation Campus located at Southern Wisconsin Regional Airport (JVL).