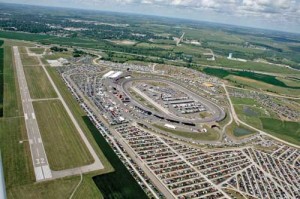 NEWTON, IOWA – Newton Municipal Airport has adapted to meet the needs of the City of Newton over the years. Since 1954, the airport had grown with the help of the city’s largest employer, “Maytag.” Airside facilities grew as the need from local businesses increased. The airport was developed from a 2400 ft sod field to its present 5600 x 100 ft paved runway with ILS, VOR and GPS approaches.

Over the years, small improvements were made in the terminal facilities and other landside infrastructure, however, none greater than the project that was undertaken in 2004. The City of Newton, along with businesses and individuals, came together to build a first-class facility. This group knew the importance of leaving the best possible first impression of their town to the flying public. The new terminal, apron and t-hangar facilities were completed in February of 2005. In 2006, Maytag announced it was sold and would eventually leave Newton altogether. This was a huge impact to the local economy, as well as the airport operations. It was now more important than ever that the airport leave a good first impression to potential new businesses.

In 2007, the new facilities would also play a role and the airport would again need to further adapt for its new neighbor, the “Iowa Speedway.” The Iowa Speedway brought NASCAR and IRL-sanctioned racing and created the busiest days the airport has ever seen. As the speedway’s races became larger with more traffic, the airport needed to adapt by adding more ramp space for parking and a runway overlay and strengthening.

The fixed base operation, Johnson Aviation, Inc., has been a full-service operation with charter, flight instruction, aircraft sales, maintenance, and aircraft management since 1949. It, also, has had to adapt to the changes in Newton, as well as the aviation environment. Johnson Aviation serves all of Newton, Iowa, whether they fly or not. The staff at the airport is the first people that Newton’s potential new businesses, customers and visitors meet, which is so important now that the town is actively recruiting new businesses.

Johnson Aviation – along with the City of Newton and local aviation enthusiasts – hosted an extremely successful “Fly Iowa” event. Fly Iowa is Iowa’s aviation state fair. It consists of a free air show, displays, and aviation education programs sponsored by the Iowa Aviation Promotion Group. Holding this event in Newton was special due to Iowa Speedway’s involvement. GASS racecar ride-alongs, a car show, excellent food and a free race that night, combined for a great day for Newton and aviation. Fly Iowa 2012 is scheduled for Saturday, September 15, 2012 at Atlantic Municipal Airport, Atlantic, Iowa.

Johnson Aviation’s biggest challenge now is running an aviation service business for a town of 15,000 355 days a year and then gearing up for the 10 extremely busy days that the racetrack brings. Newton Municipal Airport has proven its ability to adapt to the ever-changing world of aviation. Future plans include additional ramp space to accommodate additional race traffic and t-hangars for increased local demand. For additional information contact Ethan Nasalroad of Midland Aircraft/Johnson Aviation at 641-792-1292. Nasalroad is airport manager and president of Johnson Aviation.