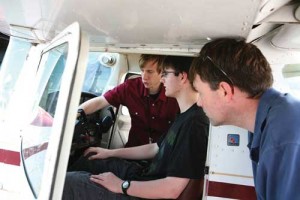 MADISON, WIS. – “International Learn To Fly Day” was first announced in 2009 during EAA AirVenture in Oshkosh, Wisconsin.  Subsequently, on May 10, 2010, the United States House of Representatives provided support for the event by passing a resolution entitled, “International Learn To Fly Day.”  With this action, Congress officially designated the third Saturday of May as the annual date for this event to be held throughout the aviation community. 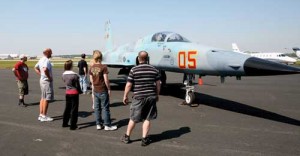 Wisconsin Aviation, Inc. sponsored a number of special events at its three locations: Watertown Municipal Airport, Dane County Regional Airport in Madison, and Dodge County Airport in Juneau, Wisconsin on Saturday, May 19. Included was hands-on introductory flight lessons for $69, the opportunity to “fly” a flight simulator, free seminars on what is involved with becoming a pilot, and tours of the airport facilities and the company’s diversified fleet of flight training aircraft. Information was also available on various career opportunities in aviation.