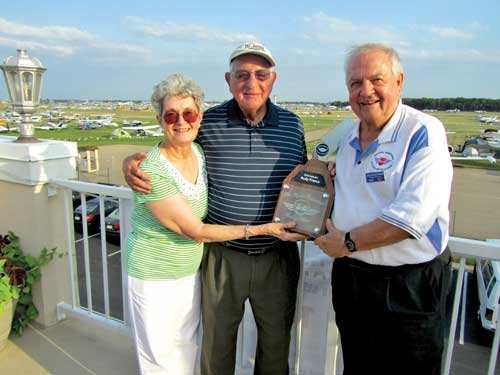 Rudy Frasca (center) of Frasca International, Urbana, Illinois, was inducted into the Flight Instructor Hall of Fame during EAA AirVenture. Jack Eggspuehler (right), president emeritus of the National Association of Flight Instructors (NAFI), presented a plaque to Frasca and his wife, Lucille (left). Rudy Frasca joined the U.S. Navy in 1949 and was a flight instructor at Glenview Naval Air Station where he used the early Link trainer for flight simulation. Following the service, Frasca attended the University of Illinois where he studied Aviation Psychology and expanded his interest in flight simulators. He founded Frasca International in 1958 and today the company offers high-end flight simulators for fixed-wing and rotary-wing aircraft to both civilian and military markets. Rudy Frasca released his book “From Cubs To Spitfires” during EAA AirVenture 2012.