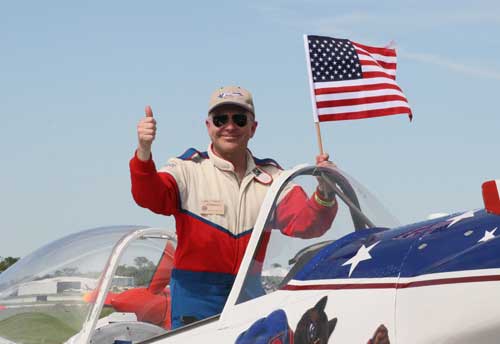 MADISONVILLE, TENN. – Popular air show performer, chief airline pilot, and former Top Gun, Jim “Fang” Maroney, 59, of Milwaukee, Wis., was killed March 23, 2014, while flying cross-country from Watertown, Wisconsin to an air show in New Smyrna Beach, Fla. The cause of the accident was unknown at press time, and an autopsy was being performed.

Maroney, flying a 1956 de Havilland DHC-1 Super Chipmunk, made a fuel stop at French Lick, Indiana (FRH) around noon on March 23 and was heading to Franklin County Airport (18A) in Canon, Georgia, when the accident occurred.

A preliminary report issued by the National Transportation Safety Board (NTSB) stated: On March 23, 2014, about 1338 (1:38 p.m.) eastern daylight time (EDT), the de Havilland DHC-1 impacted trees and terrain near Vonore, Tennessee. The airline transport pilot was fatally injured and the airplane sustained substantial damage. The airplane was operated by the pilot. Day, visual meteorological conditions prevailed for the personal flight, and no flight plan was filed.

When the pilot did not arrive at his destination, a Federal Aviation Administration Alert Notice (ALNOT) was issued. The wreckage was located during the morning of March 24, 2014. The wreckage was found on the side of a mountainous slope within the boundary of the Cherokee National Forest in Tennessee. The elevation at the accident site was about 2,222 feet above sea level. There were no known witnesses to the accident.

The wreckage was found upright, and the debris path was oriented on a heading of about 300 degrees. Damage to broken trees within the wreckage debris path was indicative of a near-level aircraft attitude at impact. There was no evidence of fire noted. The engine controls were found in the “full forward” positions. All major structural components were found within the area of the main wreckage. The right wing was severed from impact forces. The pilot was found in the cockpit and was wearing a parachute at the time of the accident; it was not deployed. The wreckage was recovered on March 31, 2014 and will be retained for examination at a later date.

Not knowing the fate of the flight on the day Maroney was reported missing, friends held out hope that the experienced military pilot may have survived an accident and was attempting to hike out of the wilderness.

The Monroe County Sheriff’s Office located the wreckage on the side of a mountain less than 30 minutes after they picked up the emergency locator transmitter (ELT) and did a grid search of the area. Rescuers were flown in by helicopter to recover the remains, due to the rough terrain.

Maroney was born in Casselton, North Dakota, on November 24, 1954, where he started flying as a crop-duster. He received a Bachelor of Science Degree in Mechanical Engineering from the University of California-Fresno prior to enlisting in the United States Marine Corps.

Maroney graduated #1 of 1500 pilots from Naval Flight Training School in 1981, and was rated #1 at Naval Training Weapons School “Top Gun” in 1983. His group was the first to fly F-18 Hornets to Miramar, replacing the F-14 Tomcat. In 1985, Maroney did an inter-service transfer to the 119th Fighter Wing of the North Dakota Air National Guard in Fargo, where he flew F-16 Falcons. He became Squadron Commander in 1997, Group Operations Commander in 2001, and retired in 2002 as a Lieutenant Colonel. 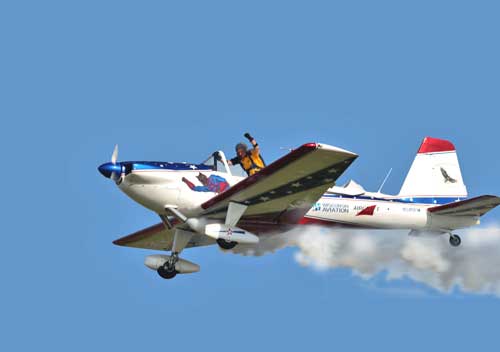 Maroney started flying air shows in 1976, and was currently serving on the Aerobatic Competency Evaluation (ACE) Committee with the International Council of Air Shows (ICAS). Maroney was best known for his Super Chipmunk performances. With the style and skill of a true showman, Maroney would take his bows by standing in the cockpit and waiving to the crowd with the canopy open as he made his final pass. Maroney performed this stunt in memory of the late Art Scholl, who made it his grand finale flying his Chipmunk in the 1980s and earlier. Scholl was killed in 1985 while filming a scene for the motion picture “Top Gun” when his Pitts S-2 biplane camera ship never recovered from a flat spin and plunged into the Pacific Ocean, never to be found. To watch a YouTube video of Maroney performing, go to http://www.youtube.com/channel/UCq21xomBq2-t8YzJGD1TZPQ.

Maroney is survived by his wife, Susan; sister, Kathy (Jerry) Rohrig; and numerous nieces and nephews. His father and hero, Maury Maroney, preceded him in death.

A funeral service and military tribute was held April 1, 2014 at the Fargo Air Museum at Hector International Airport, Fargo, ND. In lieu of flowers, donations may be made in Maroney’s honor to the Fargo Air Museum, 1609 19th Avenue North, Fargo, ND 58102; 701-293-8043; www.FargoAirMuseum.org.