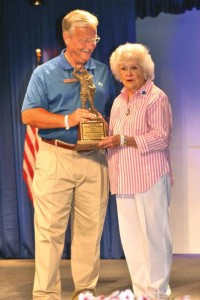 OSHKOSH, WIS. – Audrey Poberezny, who cofounded the Experimental Aircraft Association (EAA) with her husband, Paul Poberezny, in the basement of their home in 1953, and former EAA Vice President Earl Lawrence, were honored during the organization’s annual meeting, July 30, 2014. Poberezny received EAA’s “Freedom of Flight Award,” the association’s highest honor; and Lawrence received the “EAA Chairman’s Award” for his work to guide the sport pilot/light-sport aircraft initiative through the complex federal bureaucracy to its approval 10 years ago. Lawrence is currently manager of FAA’s Small Airplane Directorate in Kansas City, Missouri.