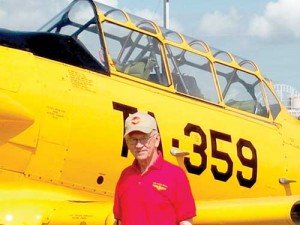 The Madison, La Crosse, Green Bay and Glenview councils of the Navy League of the United States, along with the Hangar One Foundation, held their 5th annual All Sea Services Aviation Celebration, July 23, 2015 on the back patio of the Charcoal Pit Restaurant, located along the Wittman Regional Airport fence, as the daily EAA AirVenture Oshkosh airshow swirled in the skies overhead. The 50th Anniversary Commemoration of the Vietnam War was the theme this year.

Each year, this group of Navy League organizations honors an individual who has made a significant contribution to aviation, whether military, civilian or both. This year’s award recipient is Maj. Roger A. Fetterly, USMC (Ret.).

Major Fetterly, now 79, was born on the family farm in Marinette County, Wisconsin, and enlisted in the Marine Corps in 1954 at the age of 18. Upon his return from assignment in Korea, he was selected for Naval Flight School and was commissioned as a Second Lieutenant in 1958. Major Fetterly flew Marine Corps attack helicopters on combat missions from Da Nang Airbase and aircraft carriers in the South China Sea through two Vietnam tours.

After his return from Vietnam, Major Fetterly completed his college bachelor’s degree and later a master’s degree in Administration, majoring in Business Financial Management. He retired from active duty in 1977 after 23 years of military service, having flown a dozen different military helicopters and airplanes.

During his military career, Major Fetterly was awarded 25 Air Medals for flying 500 combat missions in Vietnam, in addition to many other military honors, including the Vietnam Service Medal with bronze star.

Upon retirement from active military duty, Major Fetterly began a 21-year career with the State of Wisconsin Department of Administration, from which he retired in 1998. He has been active in local government in his Sun Prairie community, serving on the school board and town planning commission, the latter of which he currently chairs. He is a life member of many military veterans’ organizations and has served them in various capacities over the years as an officer, director or liaison.

Major Fetterly continues his interest in aviation as a member of the UW Flying Club, where he serves on the Board of Directors and as the Aircraft Maintenance Officer. He is an EAA member and active Young Eagles participant.

The 2015 Navy League Aviation Excellence Award recipient lives with his wife, Frances, in the Town of Sun Prairie, a few miles northeast of Madison. They also maintain the Century Farm in Marinette County where Major Fetterly was born, which has now been in the family for over 120 years. They have two adult children.

The Navy League of the United States is composed of local councils of citizens supporting the sea services – Navy, Marine Corps and Coast Guard. It has three missions: to enhance the morale of active-duty personnel and their families, inform Congress and the American public on the importance of strong sea services, and support youth through programs such as the Naval Sea Cadet Corps, Junior ROTC and Young Marines that expose young people to the values of our sea services. The Madison council’s website provides additional information: http://www.madisonnavyleague.org/

Plan to attend next year’s Navy League Aviation Celebration, usually held on the Thursday afternoon during AirVenture week. The Navy League of the United States is a great organization doing great work, and needed more now than ever.