The Rotec Radial Engine – A Perfect Match For The Aerolab LoCamp

It has been said that form follows function; that is, a machine looks the way it does as a result of what it is intended to do. Fair enough. But let’s face it – between the designer’s concept and the final product, there is usually room to add a pleasing degree of elegance. In light aviation in particular, some airframe and engine designers are truly artists, and others are, well, just engineers.

In my years of involvement with the Aerolab aircraft, designed by now-retired Al Italia Captain Francesco Rizzi, the comments heard most frequently from pilots and non-pilots alike mention the striking beauty of this thoroughly modern rendering of an old fashioned, 1930’s-looking aircraft. The second reactions, usually from pilots and other knowledgeable sport aviation enthusiasts, often mention the extent of the use of modern construction techniques and materials in producing the Aerolab LoCamp kit, the first kit of the Sport Camp series to be offered for sale (www.aerolabusa.com). No surprise then that the Aerolab LoCamp would find its ideal powerplant in the Rotec Aerosport line of sport plane 110- and 150 hp radial engines.

Much has been written about the creation of Australia-based Rotec Aerosport and the development of the R2800 and R3600 radial engines, including the background of Paul Chernikeeff, the self-taught engine designer, and his unlikely but successful efforts, along with his father, Jim, and brother, Mathew, to create a company on a shoestring budget to bring these engines into production and world-wide distribution in only a few years following their 2000 start. A concise summary of this history can be found on the Rotec website: www.rotecaerosport.com.

Less has been written about the engines themselves, and the astonishing demand they revealed for the return of a beautifully designed nostalgic rendering of the round engines of the past, once the dominant engine configuration in all of aviation. And not much has been written about the Chernikeeffs’ talent in producing these engines using classic radial architecture, but with modern design techniques, construction materials, technical enhancements and production machinery.

Like the Aerolab products, the Rotec radials are romantic throwbacks to an earlier era, but also are cutting-edge examples of what can happen when designer artistry encounters state-of-the-art production capability. How fortunate that Rizzi and Chernikeeff created products that seemed to be made for each other, inspired apparently from the same aeronautical passions and affections!

Most of us, not expert in the evolution of engine design or aircraft engine history, might tend to think of radial engines as the earliest aircraft powerplants, but this is not so. Of the round engines, the rotary engines came first, powering many of the WWI fighters. In this configuration, the crankshaft is bolted to the airframe, while the cylinders and crankcase with the propeller affixed, revolve around the anchored crankshaft. Among the complexities of this design was one shinning advantage: the air-cooled engine made its own cooling airstream!

Another early configuration was the in-line, liquid-cooled powerplant in which all of the cylinders are arranged in one row, either erect or inverted. Similar concepts included the Vee, with two banks of multiple liquid-cooled cylinders arranged 45, 60 or 90 degrees apart, and X and W engines, with three and four in-line banks arranged around the crankshaft. With the eventual successful development of air-cooling technology, the familiar horizontally-opposed “flat” engines, with two banks of cylinders positioned 180 degrees apart in the horizontal plane, came to dominate light aircraft engine production.

The need for liquid cooling imposed a practical limit in early engines with one or more rows of cylinders arranged in banks, mostly due to the weight penalty imposed by the necessary additional plumbing, water jacket and high-drag radiators, and the coolant itself. Air cooling was not effective in larger engines with four, six or more cylinders in a bank due to the inability to get cooling airflow to the more aft cylinders.

First, the radial engine design is very conducive to air cooling since the cylinders are out front in the airstream. Even with a second row of cylinders behind the first, the aft cylinders can be arrayed in the gaps between the front row and get an adequate share of cooling air as well. (Large radial engines, with multiple rows of cylinders emerged as baffling, cowling and other cooling technologies were developed.) Without the need for a liquid-cooling system, the radials enjoyed a natural power-to-weight advantage. Radial engines present a relatively large frontal area to the airstream, as compared to other configurations, especially the horizontally opposed flat engines, and this can be seen as a disadvantage as well as the source of their engine-cooling advantages. This drag penalty can be reduced somewhat in slower high-drag airplanes through the use of speed rings and other cowling techniques, and eliminated entirely in larger, sleeker aircraft, as was dramatically demonstrated by their use in the very fast WWII fighters, such as the F4U Corsair, F6F Hellcat and P-47 Thunderbolt, all three powered by Pratt & Whitney R2800 2,000 hp Double Wasp radials, and each capable of speeds in excess of 400 mph.

Another advantage of the radial design in a single-row configuration is the short overall length of the engine. Since the crankshaft is short, with only a single throw, it needs fewer main bearings and can be made quite strong without a weight penalty, increasing the durability of the engine while decreasing its weight. The crankshaft main bearings are on each side of the throw and are usually ball or roller bearings, rather than the plain bearings found in most other configurations. The connecting rods are of the articulating type, where the master or “mother” rod has a large crankshaft bearing and all rods are pinned, or linked, to this master rod bearing with knuckle pins. (You Tube has several very good animations and cut-away videos of such a configuration in action.)

A radial engine does not have a camshaft per se, but uses one or more cam rings to actuate the overhead intake and exhaust valves of the 4-stroke setup through the use of conventional pushrods and rocker arms. The cam ring has four lobes and turns counter to the crankshaft and at only one-eighth of the crankshaft speed, since each valve is actuated four times for each cam ring revolution, which allows for eight crankshaft revolutions. 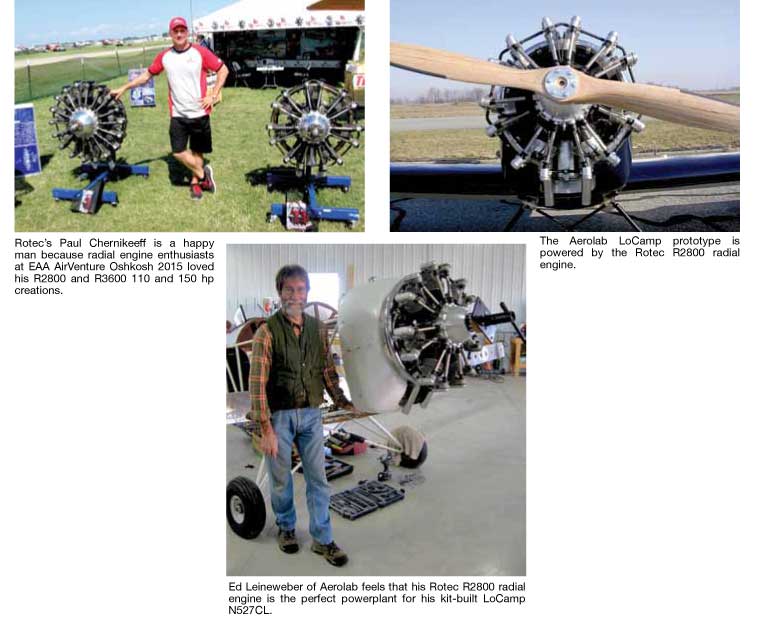 Smaller radial engines of the past were conventionally carbureted and usually not fuel injected. The Rotec engines come with the same Bing constant-pressure altitude-compensating 40 mm carburetor used on the popular Rotax 912 series of engines, and employ an automotive-type choke but no mixture control. Rotec’s recent development of throttle body injectors, however, has made it possible to improve the delivery of the fuel charge to these engines while employing a much simpler design.

The Rotec radials employ a planetary speed reduction unit (PSRU) to reduce engine to prop speed by a ratio of 3:2. This facilitates getting more horsepower from a smaller engine, while still allowing the use of a larger, slower-turning propeller. The PSRU is located in the nose hub of the engine and employs epicyclical gearing that allows the prop to rotate on the same axis line as the crankshaft.

A Rotec 110 hp R2800 can swing a 76-inch wooden propeller with a 60-inch pitch at 2,400 rpm while the engine turns at its 3,600 rpm rated engine take-off speed. Some might disparage the use of PSRUs to develop more horsepower, but engine gearing has a long and successful history. (The Lockheed Super Constellation used PSRUs in the noses of its four Wright Cyclone radials.)

Rotec engines demonstrate their modernity in several additional respects. First, the parts are CNC machined from billets rather than made from castings, except for the cylinder heads, rocker box covers and center intake manifold, which are the only cast parts on the engine. The starter solenoid is integrated into the starter unit, and the voltage regulator is integral to the alternator. Dual ignition is supplied to the auto-style spark plugs by a self-energizing magneto and a Hall Effect electronic ignition module. The engine will operate on autogas, but with its 8.5:1 compression, it prefers 100LL avgas, since it does best on a fuel with a RON of at least 97. The valve train is conventional with dual cam rings and roller tappets. At 80% power, the R2800 burns 5.8 gallons per hour. Oil must be of the semi-synthetic type and have the additives necessary to properly lubricate the PSRU. Aeroshell 15W 50 is one example.

The Rotec website contains a wealth of additional information about the R2800 and R3600 engines, including FAQs, technical data and customer service information.

Anyone contemplating operating a flight engine of relatively new design and production will be very interested in the accumulating field experience. Approximately 1,400 Rotec radials have been shipped as of EAA AirVenture Oshkosh 2015, according to Paul Chernikeeff. Since this production stream has been at a rising annual rate, most of the engines have been shipped in more recent years, with only a few of the oldest examples reaching the 1,000 TBO set by the company. Several service bulletins were issued concerning the early engines, and many have been upgraded to incorporate those changes. Chernikeeff recommends that anyone contemplating buying a used engine to check with him via the website contact information so the prospective buyer can confirm whether or not recommended upgrades have been accomplished.

The company does not operate a U.S. service center, but rather encourages operators to communicate directly with the factory and promises prompt and cooperative technical support. While many U.S. operators would prefer a state-side service presence and available factory-certified mechanics, the wonders of our modern transportation and communication age makes Rotec’s approach feasible. As popular as the Rotec radials have proven to be, they remain a specialty item in a very small industry. There is only so much margin to spread around.

Fortunately, their history over the past 15 years has shown that the Rotec radials are very easy to work on, especially given their classic, time-tested architecture. Paul Chernikeeff believes that anyone with decent mechanical skills and some instruction from the company can easily maintain their engine, and even overhaul it, if necessary. Rotec also offers an option for a factory overhaul for a flat $5,000, plus shipping and related charges and fees. Having gone this route myself, I can report fully satisfactory results and at a total cost well below any other aircraft engine factory overhaul, even with shipping.

The reality is that total Rotec engine volume will never approach that of the Continentals and Lycomings of the past, nor even the numbers of the ubiquitous Rotax engines that power most Special Light Sport Aircraft (S-LSA) of today. But as the numbers of Rotec radials in service grow slowly but steadily over time, so will maintenance opportunities as well.

The beautiful Rotec radial engines are not for every pilot or every sport airplane, but they are the perfect match for many, including the Aerolab LoCamp. If you are a lover of old fashioned aircraft powered by old fashioned engines, but want a machine that is as new as tomorrow, check out the artistry and engineering to be found in the Aerolab/Rotec match-up.