Florida – The Place To Fly To, When The Snow Flys In The Midwest | Midwest Flyer – General Aviation Magazine

Florida – The Place To Fly To, When The Snow Flys In The Midwest

Depending on where you live in the Midwest and your final destination, Florida is between 1,000 and 1,500 nautical miles southeast, and the course is mountain free if you fly west of the Appalachian Mountains. One or two fuel stops for most small GA aircraft, and a day’s travel, and you, too, can be soaking up the sun in the middle of winter, but you will likely not be alone. Florida appeals to a lot of people, and it is best to book your hotel or condo well in advance.

If your local airport is lacking activity, especially in the wintertime, you will be delighted with the activity level at most Florida airports. As someone said to me while on the ramp at Venice Municipal Airport (KVNC), as planes were taking off and landing, one after the other, “this reminds me of the hay day of aviation in the ‘60s and ‘70s. Venice Municipal Airport is located two miles south of the central business district of Venice, a city in Sarasota County, Florida.

While in Florida, we toured the National Naval Aviation Museum in Pensacola; participated in a monthly meeting of the Florida Aero Club in Hollywood, Fla., where we put on a power point presentation on our annual Canada fishing trip to Miminiska Lodge, Ontario; attended the club’s monthly fly-out to Venice, Fla., at the restaurant, Sharky’s on the Pier; flew to Vero Beach and toured the Piper Aircraft factory; attended a pilot safety seminar and fly-in breakfast and lunch at Wipaire’s Service Center in Leesburg; and attended the Collings Foundation “Wings of Freedom Tour” at Venice Municipal Airport, Venice, Fla., Feb 12-14, 2016. 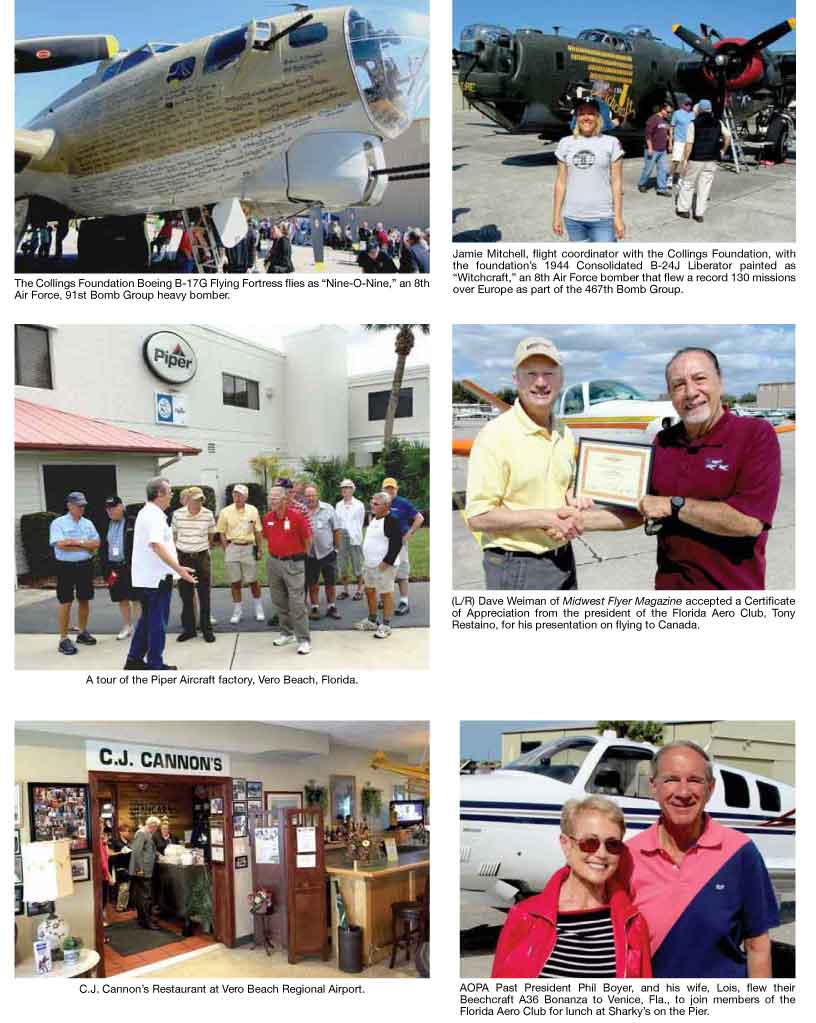 The Collings Foundation is a non-profit, educational foundation (501(c)3), founded in 1979, headquartered in Stow, Massachusetts. The purpose of the foundation is to organize and support “living history” events and the preservation, exhibition and interaction of historical artifacts that enable Americans to learn more about their heritage through direct participation.
Since 1989, a major focus of the foundation has been the “Wings of Freedom Tour” of World War II aircraft. This tour showcases two fully restored bomber aircraft: a B-24 Liberator and B-17 Flying Fortress. The newest addition to the Wings of Freedom Tour is the World War II dual-control P-51C Mustang “Betty Jane.”

The foundation’s 1944 vintage Consolidated B-24J Liberator is painted as “Witchcraft,” an 8th Air Force bomber that flew a record of 130 missions over Europe as part of the 467th Bomb Group. The Boeing B-17G Flying Fortress flies as “Nine-O-Nine,” an 8th Air Force, 91st Bomb Group heavy bomber. The B-17 was the companion of the B-24 in thousands of wartime bombing and reconnaissance missions. Together, they were the backbone of the daylight strategic bombing campaign of World War II.

In honor of America’s Vietnam Veterans, the Collings Foundation has also developed the “Vietnam Memorial Flight” of the McDonnell F-4D Phantom II, Douglas TA-4J Skyhawk, Bell UH-1E Huey and F-100F Super Sabre. The F-4D Phantom II is the only civilian operated example of the type and has appeared at major U.S. air shows since 1999 in the markings of the aircraft flown by Gen. Robin Olds in Vietnam. In 2005, the F-4 was joined by the Douglas TA-4J Skyhawk that has been painted to represent the markings of H&MS-11 “The Playboys,” a distinguished all-volunteer fast forward air control group operated out of DaNang by USMC MAG-11.

Airport restaurants are plentiful in Florida. Venice has the Suncoast Café in the terminal building (www.suncoastcafe.com), plus Sharky’s on the Pier within walking distance (www.sharkysonthepier.com). The restaurant at Vero Beach Regional Airport, C.J. Cannon’s, is definitely worth a cross-country flight (www.cjcannonsrestaurant.com).

We took a day to visit Lakeland Linder Regional Airport (KLAL) before the mad rush to Sun ‘n Fun in April, where we met with Rick Garcia, President of Gulf Coast Avionics; Neil Glazer, owner of the Pilot Mall (www.pilotmall.com); and John “Lites” Leenhouts, President and CEO of Sun ‘n Fun. The dates for the 2017 Sun ‘n Fun International Fly-In Expo is April 4-9 (www.sun-n-fun.org). 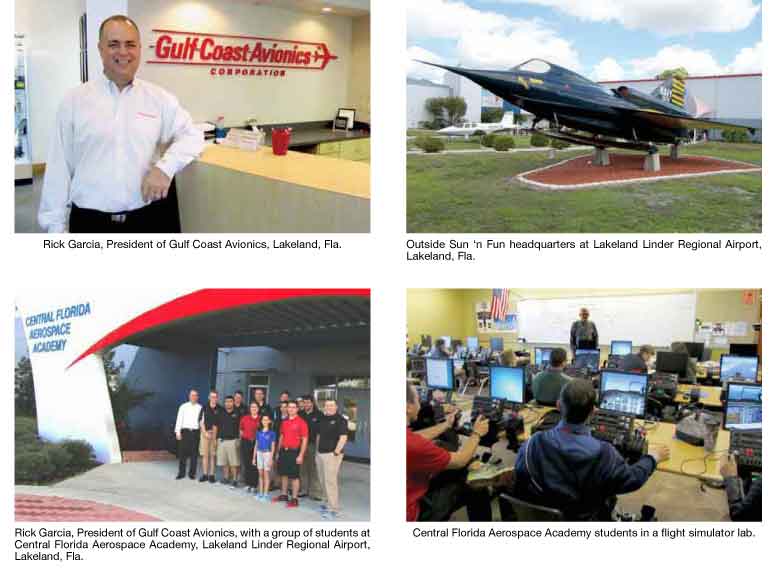 The Central Florida Aerospace Academy of Kathleen High School is where those of us in aviation careers today should have gone to high school had we been given the choice.

The idea to build an aviation technology high school was Rick Garcia’s, who started his career in the U.S. Air Force, where he found his niche in avionics. He proposed the idea of building a high school that specializes in aircraft maintenance and technology to World War II veteran and businessman, James C. Ray, who donated the $7.5 million to build the facility.

On December 7, 1941, at the age of 18, James Ray witnessed firsthand the Japanese attack at Pearl Harbor. He had traveled to Hawaii to work on a construction project for the Navy that was situated just a few hundred yards from the USS Arizona battleship as the attack unfolded.

Shortly thereafter, Ray enlisted in the U.S. Army Air Corps and served as a B-17 command pilot in the 8th Air Force, 447th Bomb Group, which was stationed at Rattlesden, England. He flew a total of 30 missions, including raids on the Schweinfurt ball-bearing plants in Germany. He was also lead pilot on a D-Day attack on German headquarters in Normandy, France.
After the war, Ray flew his Cessna 170B on business and personal trips to 58 countries and to every Caribbean island with a landing strip. He has also flown extensively in North America as a rancher, oil and gas explorer and real estate developer, logging more than 3,500 hours in single-pilot Citations over a 29-year period. James Ray believes that the disciplines he obtained during flight training truly helped him become the successful individual he is today, and wanted to do something to encourage youth to follow in his footsteps.

Through a combination of relevant academic experiences, collaboration with the local aerospace community, and an aviation focus, all students at Central Florida Aerospace Academy engage in a rigorous college preparatory program that maximizes their potential for successful careers. Students are challenged with a rigorous curriculum and tailored hands-on experiences with special focus on science, technology, engineering, and math (STEM). The academy responds to the needs of industry by placing emphasis on teamwork, individual achievement, skill development, creativity, and innovation, as well as critical thinking. Major courses of study include Engineering, Aerospace Technologies, Avionics, Airframe and Powerplant Mechanics, and Air Force JROTC.