EAA AirVenture Museum Made For Best Conference Banquet Venue Ever!

OSHKOSH, WIS. – While the 61st annual Wisconsin Aviation Conference was held at the Best Western Premier Waterfront Hotel & Convention Center in downtown Oshkosh, May 2-4, 2016, the banquet was held May 3 in the EAA AirVenture Museum, next to Wittman Regional Airport, the site of the world’s greatest aviation event, EAA AirVenture Oshkosh.

The conference itself featured a panel of state and federal officials who encouraged attendees to ask questions concerning everything from NextGen, ADS-B out and controversy over mixing Unmanned Aircraft Systems (i.e. drones) with manned aircraft at airports. 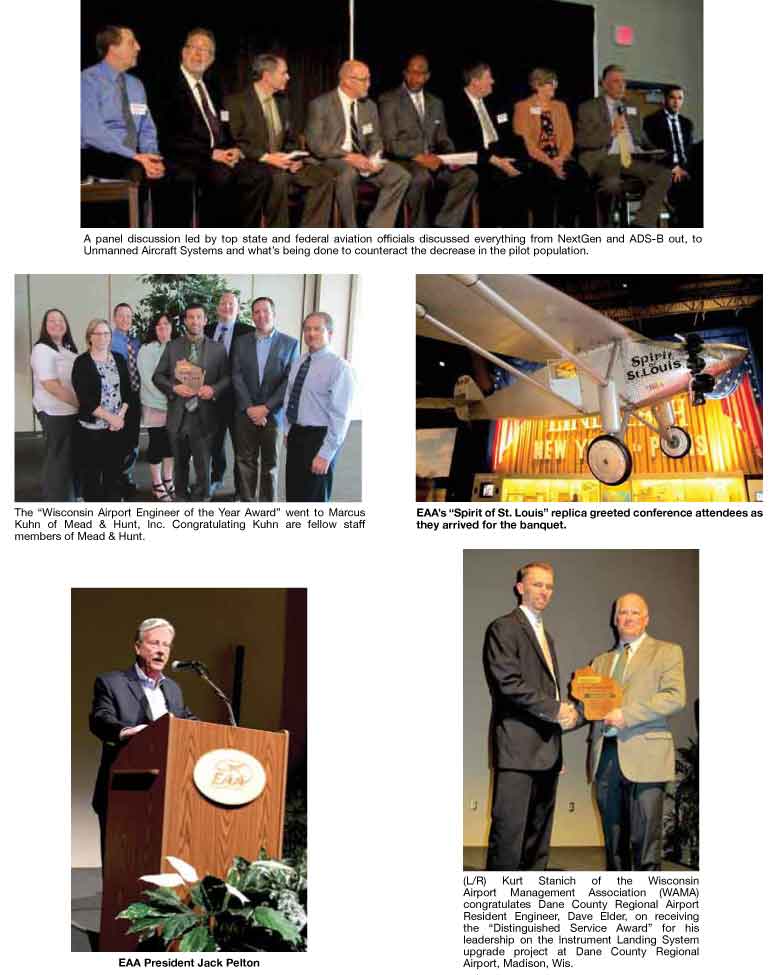 Charity Zich, manager of the Chippewa Valley Regional Airport in Eau Claire, Wis., asked FAA Regional Administrator Barry Cooper, if NextGen will improve radar coverage in the airspace in north central Wisconsin. While Cooper recognized that the gap in radar coverage exists, he noted that NextGen was never intended to improve radar coverage, but rather replace it. Cooper said: “Congress wants NextGen to go faster and faster, but we have limited funds.” Keith Gerard of the Wisconsin DOT Bureau of Aeronautics stated that the state is working to fix the gap with the FAA, and hopes to add two more stations, but doesn’t know if the federal government will pay for it and is waiting for a response.

Further questions dealt with ADS-B out equipment, and whether the 2020 deadline the FAA has imposed will hold true. Cooper said that there are no plans to extend the deadline, despite the hardship it poses on the aviation community, but recognizes the frustration the requirement is causing aircraft owners, who must either comply or avoid controlled airspace and airports. Gerard stated that a federal loan program may be forthcoming.

One aircraft owner noted that many aircraft owners are choosing to wait to see if ADS-B equipment costs will come down, but warned that avionics shops may not be able to handle last-minute installations.

Also on the panel from the FAA Great Lakes Region were Susan Mowery-Schalk and Jim Keefer.

Other panelists included Wisconsin DOT Bureau of Aeronautics officials David Greene, Keith Gerard, Scott Brummond, Mark Arnold and Tom DeWinter. Green thanked attendees for all they do to keep airports going. “Our challenges coincide with those of the FAA,” said Greene.

Concerning mixing drones with manned aircraft at airports, airport officials asked the panel how they are to handle the situation, and what exactly are their responsibilities and obligations.

Attorney Russ Klingaman of Milwaukee noted that Unmanned Aircraft Systems hobbyists are required under current regulations to give airports notice if they intend to be flying within 5 nm of an airport – public or private – and asked what are airport officials expected to do when notified.

David Greene of the Wisconsin DOT Bureau of Aeronautics noted: “The airport manager is put in a very tough spot. The question is then what? What we don’t want to see are 72 different county policies coming out” regulating drones.

Brad Livingston of Dane County Regional Airport in Madison, said that he doesn’t want the liability, so as a towered airport, he is putting the responsibility “back onto the backs of the FAA.”

Another participant said that they are looking at an ordinance for Milwaukee County, and commented: “It is getting out of hand.”

Cooper responded: “You are dealing with federal airspace when you are talking about creating local ordinances.”

John Chmiel of Wausau Downtown Airport suggested: “We need to look at UAS as an opportunity to get more people into aviation. We need more education, not more regulations. Wausau Flying Service has gotten more flight students since the introduction of UAS.”

Cooper: “This might be how we get more people into aviation.”

Jeff Baum, president of Wisconsin Aviation, Inc., asked: “What is the national and state plan to counteract the decrease in pilots?”

Scott Brummond from the Wisconsin DOT Bureau of Aeronautics responded by stating that the state has a program that focuses on youth and working with high schools, referring to Wisconsin’s Aviation Careers & Education (ACE) Program.

Greene added: “We are seeing a decline in interest in aviation careers in general, not only pilots.”

Cooper added: “We realize the need to grow the aviation workforce.”

The conference format was designed this year to produce a more productive, interactive and informative program. Both the FAA and Wisconsin Bureau of Aeronautics scheduled private, one-on-one meetings with airport officials to discuss matters specific to those airports during the conference.

Among special guest speakers included AOPA President Mark Baker and the president of the National Air Transportation Association (NATA), Tom Hendricks. Baker briefed conference attendees on AOPA’s initiatives to increase the pilot population through the promotion of flying clubs. Baker went on to describe AOPA’s strong stance against user fees and its opposition to privatizing the air traffic control system, and its support for the Pilot Bill of Rights II legislation, which will reform the Third Class Medical.

NATA President Tom Hendricks noted that regardless of the aviation organization, “the general aviation community speaks together.”

“If we want to lose battles in DC, we go to war. It is our policy at NATA to listen, be respectful, and help people succeed. If this requires giving others credit for our efforts, so be it. At NATA, we believe in being humble, respectful and solution oriented. The challenges bureaucrats face are huge.

“If Unmanned Aircraft Systems is what it takes to light the fire to get people involved in GA, let’s work to integrate them into the system.”

Concerning the proposal to privatize the air traffic control system, Hendricks said: “It would increase costs when we already have a very safe system, and privatization would turn that upside down. We are not only concerned about fees… We are concerned with safety and access by GA. Rural America will suffer if air traffic control is privatized.”

In closing, Hendricks urged fixed base operators and airport officials to talk to their elected officials and let them know why they are against the privatization of the air traffic control system and support the Pilots Bill of Rights II.

In a separate session, Adam Williams, manager of airport policy with AOPA, emphasized AOPA’s support of Third Class Medical Reform and the Pilots Bill of Rights II. He noted that FAA reauthorization has been extended to September 30, 2017.

Concerning FAA’s “Hangar Use Policy,” AOPA has asked for a common sense approach that would allow for aircraft construction at federally funded airports.

There are seven AOPA regions in the country with the goal of a GA Caucus in every state, and an aviation day at every state capitol every year.

AOPA’s Airport Support Network involves over 2300 volunteers, and is an early warning system of possible airport closers or detainments, working in liaison with airport officials to protect and promote airports.

At the closing banquet, EAA President Jack Pelton reiterated the importance of Third Class Medical Reform, the Pilots Bill of Rights II, and changes in hangar use language to permit aircraft homebuilding, restoration and maintenance.

Pelton was pleased with the FAA’s decision not to charge EAA air traffic control fees for AirVenture, as the agency has been doing the last several years, and pleased with federal initiatives on the low-lead fuel replacement program.

Pelton announced that among the big attractions planned for EAA AirVenture Oshkosh 2016, July 25-31, will be the Canadian Snowbirds Jet Team; the likelihood that there will be two B-29 Superfortress bombers flying – “FiFi” and “Doc;” the first appearance of the four-engine Martin Mars Flying Boat, originally designed and built for the U.S. Navy during the World War II era, and currently used as a water bomber to fight forest fires in Canada, western United States, and Mexico; the 25th anniversary of “Desert Storm,” which will include an appearance by U.S. Air Force General Chuck Horner who led the air attack on Irag; the 75th anniversary of Pearl Harbor featuring the Interstate Cadet in an aerial reenactment of the battle; the 100th anniversary of Boeing Aircraft to include the Boeing 747 and 767 on display; and an outdoor concert with the entertainment to be announced.