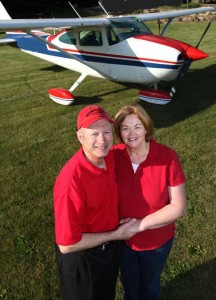 Dave Weiman is editor and director of advertising. He holds degrees from Metropolitan State College-Minneapolis (ALA), the University of Minnesota-Twin Cities (BA), and the University of Wisconsin-Madison (MS). Dave was on the faculty at the University of Wisconsin in extension education prior to Midwest Flyer Magazine. He started flying in 1971 and holds a Private Pilot Certificate (Land & Sea), an Instrument Rating, and high altitude, complex gear and tailwheel endorsements. Dave and Peggy have owned three aircraft and currently own a Cessna 182 Skylane.

Peggy Weiman is director of production and circulation. She holds a degree from Granite Falls Technical College in Minnesota, and has received advanced training in computer science. Peggy is experienced in graphic design and responsible for the final layout of the magazine, as well as the magazine’s website and Internet services.  Prior to Midwest Flyer Magazine, Peggy held administrative positions at the University of Wisconsin-Madison campus.

Readers regularly comment: “The current issue is better than the last,” which is evident in the awards bestowed Midwest Flyer Magazine:

“Award of Excellence” for outstanding leadership and the promotion of aviation in the state of Minnesota (Minnesota Council of Airports, 2004).

From hard-hitting editorials and columns from experts in aviation law, pilot health, flight training, aircraft maintenance, and airport development, to feature stories about pilots, planes, airport restaurants and travel destinations, and the most complete and current calendar of aviation events in the Midwest, Midwest Flyer Magazine has the content readers are looking for without all of the fluff! People may skim over other aviation publications, but they read Midwest Flyer Magazine from cover to cover.