What is imagery analysis? The definition of imagery is the ability of a person to identify items and activities, and put together a picture of what it means. It’s an imagery mindset that one must have to be a successful imagery analyst.

What goes into that mindset? Well, an analyst must have patience, good judgment, perseverance, accuracy and the ability to see what no one else can. In today’s world, imagery analysts must consider themselves knowledgeable about today’s world, so they can be better analysts for their customers and that’s just one part of the instruction for the imagery analysis program at Northland Community & Technical College (NCTC).

Where can we get imagery? Most imagery comes from satellites, such as Landsat – which is the longest-running enterprise for acquisition of satellite imagery of Earth, operated by NASA. Another way is through archrival imagery that has been released by the U.S. government and is available by request from the National Archives in Washington, DC. The largest commercial satellite company is DigitalGlobe. Aircraft also collect imagery and many companies fly in support of surveying and aerial mapping. Though most commercial imagery is expensive, that’s about to change.

What about imagery in today’s world? It’s an exciting time for those interested in imagery. As our phones have shrunk, so have the satellites. Today, there are several small commercial satellite companies in business, such as Planet (Planet.com), Terrabella (owned by Google), and Blacksky.

The size of the satellite has changed. It is no longer a large multi-million dollar satellite. Today’s satellite world is a nano-satellite world. The companies I mentioned above have or will send approximately 250 lower-cost satellites into orbit in coming years, ranging in mass from 1 pound to 1,000 pounds.

What that means is that you may now receive satellite imagery right to your computer at a lower cost. The possibilities are endless. For example, you could get imagery of your property or business for insurance purposes, or for environmental and agricultural monitoring, to name a few. The statement the small satellite company Planet has on their webpage: “See Change. Change The World,” says it all!

NCTC students use imagery analysis in their world.

Two 2014 NCTC graduates of the imagery analysis program are sensor operators with a large company called Fugro. What they do is fly twin-engine turboprop aircraft in the U.S. and internationally. One of them is Robert Nelson who started out as a sensor operator with Fugro and now is the Aviation Safety Officer/Health & Safety Coordinator/Flight Operations Support Manager. He said, “While working as a Sensor Operator for Fugro, my main responsibility is to work with our pilots to ensure the geospatial data we collect is accurate and free from errors. Most of the sensors we use are Leica ADS and ALS systems, though we do possess several others. While in production mode, I am constantly monitoring the assigned sensors for things like clouds that could cover areas of a project. Typically we operate aircraft from our fleet, such as Cessna Conquests, Piper Navajos, and a Cessna 310.

“I have worked on many projects with a vast array of clients. When I think back on the experiences that I have had here, I am reminded of just how rewarding a field this is. The work we do and the data we collect not only help improve people’s lives, but in some cases, can actually work to save lives.”

Another is Noah Berg, who added: “We collected orthoimagery over Zion and Glacier National Parks, as well as other natural wonders. We collect robust data from LiDAR, RaDAR, oblique imagery and the company is testing new high-tech sensors. The data we collect is used on a national level for disaster response, national security, economic development, utility maintenance and many other vital national interests.”

Another way imagery is collected today is by using drones. Many companies are flying drones today. One company is called Imagerhee (imagerhee.com). Alex Monsrud, a 2014 graduate of NCTC and the imagery analysis program, is a founding member of the company. Imagerhee is out of North Carolina. They have been flying drones to capture videos and images for real estate and making promotional videos of various attractions in the area. They have NC certification, which involves understanding all the state laws and privacy considerations when flying cinematography with drones.

Alex said, “Drones have multifaceted uses and my experience here in western North Carolina has been primarily with tourism and real estate. Because of the rugged mountainous terrain, we are able to show a perspective that people haven’t seen before because they can’t get to it. It’s pretty amazing when doing work for tourism. For example, when you can show an aerial perspective of a waterfall that no one can get to on foot. Additionally, when working with real estate, we are able to help realtors obtain straight-on views that they can’t get because the houses are built into the side of a mountain. It has been an amazing experience to be a part of an ever-changing, ever-evolving industry, and to be the first in our region to establish this kind of business.”

One of the most important events occurring with imagery and technology is collaboration. Now people from all over can collaborate on issues, such as natural disasters. A NCTC student volunteered her time and skills supporting the Humanitarian OSM Team Hurricane Matthew in Haiti by providing geographic data.

In the classroom: Students in the imagery analyst course learn about imagery from its history to nano-satellites. The first thing they learn to do is to get an imagery analyst mindset. It takes awhile for someone who has never looked at an image to be able to identify an item, determine its meaning and to have confidence to brief their analysis. Subjects range from hardcopy map reading to remote sensing applications, imagery analysis techniques, learning to exploit radar and infrared imagery, report writing, current world events, and research projects. It is a very hands-on course.

For example, students process imagery collected by the NCTC Phoenix Unmanned Aerial Vehicle (UAV). The UAV flies over farms in Minnesota and collects imagery in the near-infrared and in the red-green-blue electromagnetic spectrum. Students run the imagery through two processing softwares and then analyze the imagery and create useful data/products for the farmer.

As you know, not everyone is happy with drones coming into the National Airspace System (NAS). Many states have or want to pass legislation, limiting drones in their states. One of our assignments was for students to voice their opinion about the drones coming into the NAS and here is one opinion from a first semester student: “I think that the privacy issues are a real concern for people, but it shouldn’t turn people away from the thought of using drones for multiple uses, agriculture, search and rescue, real estate, etc. They need to create the right amount of regulation to keep people’s privacy safe and still allow people to fly drones to do their jobs. There is so much money in this industry, and if we regulate it too much, we won’t be able to use it to its fullest potential.”

What’s your opinion? NCTC has a 30-credit Imagery Analysis Certificate, which concentrates on distinguishing imagery from a variety of sources, cameras, radar, and satellites, and identifying what information the image is showing. It also has a 60-credit Geospatial Intelligence Analysis AAS Degree, which takes a student through the end-to-end process of planning, preparing, and conducting analysis of geospatial information.

As you can see, NCTC imagery analysts are out making a difference in today’s imagery world. Come to Northland, make a difference and make your story. 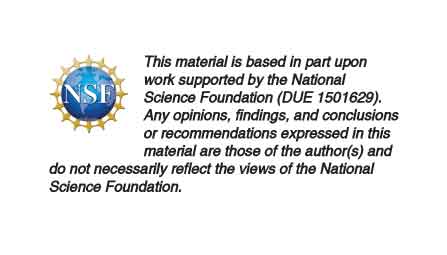 NCTC is an equal opportunity educator and employer.