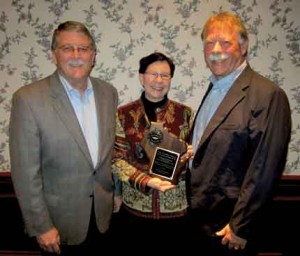 The Wisconsin Aviation Trades Association (WATA) has named The Wag-Aero Group the “Wisconsin Aviation Business of the Year” for 2017 for more than 50 years of professional service to the aviation community worldwide. The award was presented to owners, William E. Read, Chairman and Chief Executive Officer, and his wife, Mary Myers, President, at ceremonies held April 25 during the Wisconsin Aviation Conference in Pewaukee, Wisconsin.

Wag-Aero was founded by Dick and Bobbie Wagner in the basement of their home in Lyons, Wisconsin in the early 1960s. By 1965, Wag-Aero published its first catalog and continued to expand. In 1971, the business moved from the Wagners’ basement to its present location at 1216 North Road, Lyons, Wisconsin. The original warehouse and manufacturing facility has been expanded with three additions. An airstrip was built at the top of the hill for the convenience of many of their fly-in customers.

Wag-Aero sales are worldwide, serving such countries as Canada, Western Europe, South Africa, Japan and Australia. Their catalog lists over 10,000 items and they maintain a web-store for internet orders and a digital catalog with direct links to the web-store for ordering convenience.

Wag-Aero’s first kit aircraft, the “Sport Trainer,” is a replica of the Piper J-3 Cub. Homebuilders can build this aircraft by ordering many required parts through Wag-Aero. Later, the “Wag-A-Bond” and the “Sportsman 2+2” were added. The Sportsman 2+2 was one of the first four-place homebuilt aircraft that could be purchased in kit form.

Aero Fabricators, originally a subsidiary of Wag-Aero, and now a separate business unit, was formed in the mid 1970s. There are three departments within Aero Fabricators: welding, sheet metal fabrication, and seat belt manufacturing. The welding department remanufactures aircraft mufflers and engine mounts to FAA standards. It also produces many new manufactured aircraft exhaust systems, as well as structural components. The sheet metal department manufactures gas tanks, leading edges and metal skins and cowlings for many different aircraft, including Wag-Aero’s own kit aircraft. The seat belt division manufactures and repairs FAA approved seat belts and shoulder harnesses in many styles and colors, and has been a leader in the industry in designing and manufacturing shoulder harness installation kits. In all, Aero Fabricators produces approximately 850 various components.

In 1995, the Wagners sold The Wag-Aero Group of companies to Bill Read and Mary Myers.

In 1997, Wag-Aero acquired the assets of Viking Aero Manufacturing, which expanded their product and manufacturing lines to include 23 different types of handheld tow bars, 17 models of hitch tow bars, five (5) new designs of windsock frames, and several models of aircraft jacks.

The Wag-Aero Group also includes “Leading Edge Air Foils” (LEAF) – one of the oldest and largest suppliers of ultralight parts and accessories.

LEAF was founded in 1975 by Bill Raisner in Peyton, Colorado, who passed away in 1999, and was sold to Bill Read in 2000 and moved to Wisconsin. LEAF continues to be an independent service centre for ROTAX engines.

In March 2005, Wag-Aero acquired the assets of Safe Air Repair, Inc., which expanded their FAA/PMA line of manufactured parts to include many PMA’d parts for the Aeronca and Taylorcraft. This includes the 7AC Champ, 11AC Chief and BC12D Taylorcraft, along with numerous additional Aeronca 7 and 8 series models.

Read and Myers attribute the success of The Wag-Aero Group to their loyal customer base, dedicated and innovative employees, complementary product line expansions, and a strong commitment to customer service.