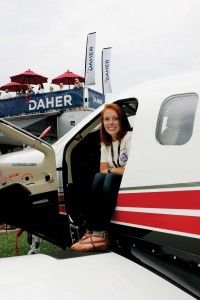 Seven weeks, three countries, two world-renowned airshows, and experience working at a top-tier aviation manufacturer… How does one begin to describe the experience of a lifetime?

In April of this year, I was notified that I was one of the EAA/DAHER International Scholarship finalists. For those unfamiliar with the program, the scholarship program is a seven-week, all-expenses-paid internship offered to one male and one female student. The finalists are college juniors or seniors who are intending to pursue a career in aviation upon graduation. The internship begins in Tarbes, France, interning at the Daher facility, and is followed by a week helping the company at EAA AirVenture Oshkosh in Oshkosh, Wisconsin. While in France, interns are also provided a side trip to the Airbus headquarters in Toulouse.

Though Daher has involvement with Integrated Logistics, Nuclear Services, Valves, and Aerostructures & Systems, this internship is offered through the Aircraft Manufacturing (Airplane Business Unit) of Daher, which has a rich history. With roots from Morane-Saulnier, and the more recently known SOCATA, Daher is considered the world’s oldest aircraft manufacturer in operation today.

Currently, Daher produces the TBM 910 and 930. Often compared to the Piper Meridian or Pilatus PC-12, the newest TBM model – the TBM 930 – is currently the world’s fastest single-engine turboprop. A turboprop allows for high-speed travel, without the high operating costs of a jet. Both the TBM 910 and 930 are produced at the Tarbes, France facility, where the internship is located. Often along my walk from the parking lot to my building in the morning, I was able to see the newly manufactured aircraft being put through production tests and inspections.

During my time with Daher, I was involved with the Customer Support Department. My main projects involved the creation of documentation on the data parameters and data flow through the TBM aircraft. Though I also had other projects, they were leading edge, and therefore, confidential.

My average day of interning began by greeting my coworkers with a “Hello” or “Bonjour,” and either a simple handshake or the French bise greeting. Afterwards, I would make my way to my desk and begin work. Often after arriving for the day, we would take a coffee or espresso break, and then around noon, we would make our way to the company cafeteria. While at the cafeteria, one could find a variety of plats du jour (plates of the day), homemade rolls, salads, cheeses, desserts, or my personal favorite, the complimentary espresso. After lunch, we would make our way back to the Customer Support building, and continue working until it was time to call it a day. Since Daher generously provided a Peugeot for Nathan (the male intern) and I to use throughout our stay in France, we would often drive to a local town to explore, or find a trail to hike following our day at work. Thanks to the sun not setting until around 9:40 pm, we often felt like we had an entire extra day after work.

The first weekend Nathan and I were in France, we chose to road trip along the French Mediterranean coast. With stops in Carcassonne (a famous medieval city), Béziers (a historic city), Arles (an inspiration place for Van Gogh), and Sete (a city along the Mediterranean), we made our way to Marseille. A highlight of this weekend was hiking to Calanque de Sugiton and swimming in the beautiful turquoise waters of the Mediterranean.

Our second weekend, Daher provided us with the opportunity to attend the International Paris Airshow (Salon International de l’Aéronautique et de l’Espace) at Paris-Le Bourget Airport. Although I knew the show to be more well-known as a trade show than an event for the general public, such as EAA AirVenture Oshkosh, I was surprised with the extent of the formality and business presence. Even though we attended the show on a Saturday and Sunday, which were days when the general public was allowed to attend, this higher level of formality was still noticeable. Most of the aircraft were only accessible to individuals attending the show through businesses or through an association with an exhibitor. Since Daher manufactures components for Airbus and Dassault, we were fortunate to be able to visit both of their exhibits, and tour an A380, A400, H130, and the fuselage of a Falcon.

During the third week of our internship, my coworkers organized a fly-out barbecue. After work, we went to the aéroclub, and flew an Aeroprakt A-22 ultralight, and two Rallye (a SOCATA-manufactured light aircraft) to a grass airstrip, a short flight from Tarbes. This airport happened to be where one of my coworkers hangared his own aircraft. After arriving at the hangar and unloading the planes, my coworker offered to take me up in his homebuilt Acroduster Too – a classic aerobatic, open-cockpit biplane. Without hesitation, I accepted. This was my first aerobatic flight, and it was fantastic! We did a roll, several loops, and even a couple of hammerheads. Upon landing, the grill was fired up, and we enjoyed grilled sausages and kebabs, baguettes, chips, nuts, cheese, and a torte. From the flights to the meal and the time spent with my coworkers, it was, by far, one of my favorite experiences during the internship.

During the next week of our internship, we had the opportunity to travel to Toulouse to visit the Airbus facility. While at Airbus, we visited the Airbus museum, where we were allowed to walk through a retired Concorde, and took a tour of the A380 final assembly line. While on the A380 tour, we were able to learn the various locations where the aircraft components are manufactured (including the Daher facility in Tarbes!), see how the components are transported to Toulouse, and view the final assembly process from an observation deck. The observation deck for the tour overlooked an enormous hangar containing three A380s parked side-by-side. It wasn’t until I spotted a seemingly microscopic person walking on the ground that I was able to truly grasp the size of the aircraft.

As our fourth and final weekend approached, we made our way south, stopping at the Gorges de Kakuetta in the Pyrenees mountains, en route to Pamplona, Spain. While in Pamplona, we did take part in the San Fermin Festival and ran with the bulls. Though exciting and adrenaline rushing, this is something I will likely refrain from repeating. On the return route from Pamplona, we made stops along Col d’Aubisque (a famous route for the Tour de France), Sainte-Engrâce (a stunning region within the Pyrenees), and the Cirque de Gavarnie (a geologic limestone bowl with a towering waterfall).

Towards the end of our internship, we were given the opportunity to fly in a TBM with one of the company test pilots. Accepting without hesitation, we made our way to the ramp. After taking off from Tarbes, we quickly rose to flight level 220. Shortly after ascending, the pilot informed Nathan and I that a Dassault Rafale from the French Air Force would be trailing our 6 o’clock and meet up with us soon. Sure enough, a Rafale pulled up along our left wingtip. After the Rafale departed, the pilot demonstrated the aircraft’s maximum descent rate, steep turns and stalls, and then flew down through the Pyrenees Mountains before returning to Tarbes.

Once our time in Tarbes came to an end, we traveled back to the U.S. and met the company at EAA AirVenture Oshkosh. Throughout the week, we helped with tasks at the Daher booth, and had opportunities to walk around the show grounds. Though we had spent the previous six weeks with our coworkers, Oshkosh was a great opportunity to get to know our coworkers better, as well as meet some of the TBM distributors, owners, and operators. Experiencing Oshkosh with Daher and the TBM community was the perfect end to a phenomenal internship.

The experience I had this summer was all that I had expected, and yet so much more. Not only was the internship an excellent opportunity to gain experience in Customer Support, it was also immensely beneficial in seeing the many career opportunities within aviation. From attending Paris-Le Bourget and Oshkosh, to touring Daher and Airbus, I am extremely grateful to Daher to have had all of these experiences.

Although my internship has come to an end, I am excited to begin my senior year at the University of Wisconsin, and look forward to my future in aviation.

EDITOR’S NOTE: Anyone with questions about the EAA/DAHER International Scholarship and internship program, may contact Michelle Peterson at Michelle.Peterson36@gmail.com.