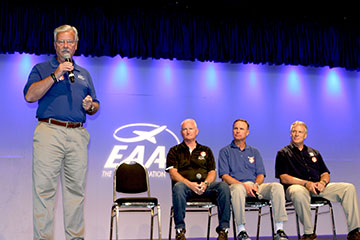 A Congressional proposal to privatize the air traffic control (ATC) system was the hottest topic at EAA AirVenture Oshkosh 2017, with the leaders of four of the largest national aviation organizations holding a rally, July 25, to discuss the issue with pilots. Leading the rally was (L/R) EAA Chairman Jack Pelton; AOPA President & CEO Mark Baker; the President of the National Business Aviation Association (NBAA), Ed Bolen; and the President of the General Aviation Manufacturers Association (GAMA), Pete Bunce. The discussion was very open and to the point. PELTON: “They (the airlines) want to take infrastructure and privatize it. Long-term financing of the FAA is what they want to fix,” and there’s better, less expensive ways to do this than to create a monopoly out of the ATC system. BOLEN: “The airlines want economic power, control and domination.” BUNCE: “Congressman Bill Schuster (Chairman, House Transportation Committee) says that general aviation is wasting money. Not true! General aviation pioneered ADS-B and WAAS for modernization. The airlines don’t have it because they did not want to pay for it. In a heartbeat, we can have user fees based on a radar blimp, not based on weight and class of aircraft.” BAKER: “If ATC is privatized, the fees would be huge, and we would be charged for every IFR flight…every landing. Small airports like Oshkosh would suffer.” Following the presentation, pilots signed a giant petition to send to Congress to urge the House of Representatives to VOTE NO to H.R. 2997. Another panel discussion, which included Pelton, Baker and Senator James Imhoff, was held July 29.