Any pilot worth their weight in 100LL, knows to check NOTAMs before every flight. Historically, the Federal Aviation Administration’s (FAA) NOTAM system left something to be desired. A flight between two large airports could literally require pilots to decipher hundreds of NOTAMs. While that problem hasn’t entirely gone away, progress has been made to make the system more user-friendly.

Additionally, with the advent of services like “ForeFlight,” getting NOTAMs has never been easier. However, getting pilots to check NOTAMs is only half the battle. Airports still need personnel with sufficient understanding of airport operations to identify information worth disseminating and the training to promptly and accurately publish that information in the NOTAM system. At small airports, this can be a real challenge.

A pilot who always checks NOTAMs before a flight will be less likely to be surprised by a runway closure.

In general, NOTAMs are used to disseminate time-critical aeronautical information to pilots which could affect their decision to make a particular flight. Common examples include: runway conditions, temporary closures of airport surfaces, identification of hazardous obstructions, and changes to navigational aids or communication procedures. As with these examples, the NOTAM system is used to transmit information that is temporary in nature or not sufficiently known in advance to allow for publication in traditional FAA publications, such as sectional charts or the airport/facility directory. By checking NOTAMs before a flight, pilots can adjust their flight plan on the ground and avoid unwelcomed surprises.

In the United States, NOTAMs are classified into five categories.

FDC NOTAM
The FAA National Flight Data Center (NFDC) is responsible for the dissemination of aeronautical information using publications, such as charts and instrument approach procedures. Occasionally, the NFDC will need to amend a publication prior to its expiration. To do so, NFDC issues a FDC NOTAM. Unlike other NOTAM categories, the information contained in an FDC NOTAM is regulatory in nature. Examples include changes to IFR charts, instrument approach procedures and temporary flight restrictions (TFRs).

At times, you may run across a Pointer NOTAM. Pointer NOTAMs are issued by an FAA Flight Service Station (FSS) to bring attention to another NOTAM. Generally, this is done because the original NOTAM affects a large area, rather than a single facility. Examples might include TFRs or the decommissioning of a navigational aid.

The other categories of NOTAMs are military, which pertain to the navigational aids and airports of the armed forces, and special advisory airspace (SAA) NOTAMs. SAA NOTAMs identify when special activity airspace, such as military operating areas, will be active outside the published schedules.

How NOTAMs Are Issued

Of the NOTAMs issued for civilian-use, NOTAM (D) are the only category of NOTAM not issued by the FAA directly. Airport operators are responsible for observing and reporting this information. While anyone can report NOTAM-worthy information to an FSS, the FAA will only publish a NOTAM confirmed by an authorized representative of the airport operator. Airport operators are responsible for providing the FAA an up-to-date list of airport representatives who are authorized to issue NOTAMs. If you don’t know who is authorized to issue NOTAMs at your airport, now is a good time to find out.

Authorized airport personnel have two options for issuing NOTAMs. The FAA-preferred and most effective method for entering a NOTAM into the system is FAA’s web-based application known as NOTAM Manager. NOTAM Manager uses a series of dropdown menus which helps to promote consistency and reduce the overall time it takes to get the NOTAM published. Airports not currently using NOTAM Manager can register online at https://notams.aim.faa.gov/dnotam. Alternatively, airports can file a NOTAM the old-fashioned way by calling FAA’s Flight Services NOTAM line at 1-877-4-US-NTMS (1-877-487-6867).

Along with observing and reporting, airport operators are also responsible for cancelling the NOTAM promptly when the reported condition no longer exists. In addition, all NOTAMs expire after a certain period of time. Airport managers must be cognizant of these expiration dates and reissue NOTAMs as needed.

In general, the information contained in a NOTAM (D) could involve any condition within 5 miles of the airport that may impact air traffic. To ensure consistency among NOTAMs conveying a broad variety of information, the NOTAM format is highly standardized. Below is an example of NOTAM (D) with each part of a typical NOTAM identified.

Next, NOTAM (D) and an FDC NOTAM will contain a NOTAM number or numbers. The example above contains two NOTAM number sets, either of which can be used to refer to the specific NOTAM. The first number set, 10/07, means the NOTAM was published in October (the 10th month) and was the 7th NOTAM published in the month for the facility. The second NOTAM number set, located in the parentheses, includes the airport identifier, as well as a computer-generated 5-digit alphanumerical code, followed by a backslash and the two-digit year the NOTAM was published. Understanding how a NOTAM is numbered can provide insight into its age, making it a bit easier to identify new versus old NOTAMs. In addition, a Pointer NOTAM will use this number to reference another NOTAM.

Following the NOTAM number(s) is the identifier for the affected location, most commonly an airport, navigational aid, or an air route traffic control center. This is followed by the NOTAM’s keyword. Understanding keywords, and which ones apply to your type of flight, can help you focus on which NOTAMs are important to a particular flight. NOTAM (D) keywords and definitions can be found in the table below. Similarly, FDC NOTAMs have their own set of keywords. They include: CHART, DATA, IAP (Instrument Approach Procedure), VFP (Visual Flight Procedure), ROUTE, SPECIAL, and SECURITY. 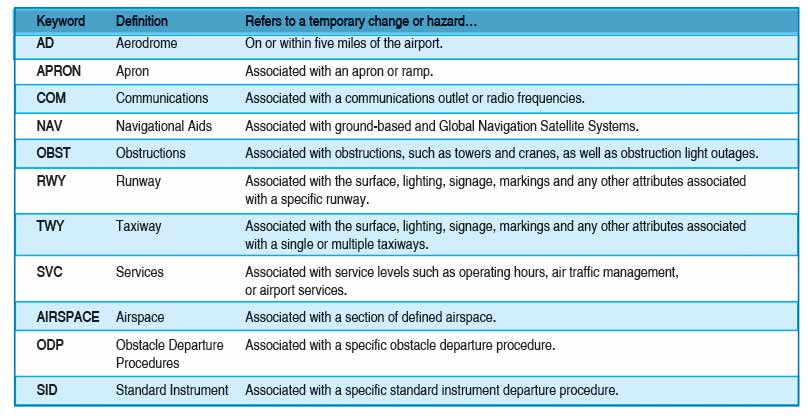 Next, the condition for the identified attribute, activity or surface is reported. Examples include field conditions, closures, decommissionings, and many more. This section often causes pilots the most frustration as unintuitive contractions can be difficult to decipher. The official list of FAA-approved contractions can be found in FAA Order JO 7340.2D. There are far too many to even begin listing them here. Fortunately, many lists of common contractions can be found online, including in the FAA’s Aeronautical Information Manual (AIM).

The final part of the NOTAM is the start time and end of validity. Essentially, this is when the hazard or change is in effect. Both the start and end times employ a 10-digit date-time group formatted as YYMMDDHHMM in Coordinated Universal Time (UTC) and separated by a hyphen. In some cases, the end date/time will be followed by the contraction “EST” or estimate, when the duration is not certain. “Until Further Notice” is no longer accepted. Additionally, a NOTAM that reflects permanent changes not yet included in an FAA publication, will replace the end of validity date/time with the contraction “PERM” to indicate a permanent change. All NOTAMs will automatically expire at their end of validity, unless “PERM” is indicated. Furthermore, a NOTAM can be issued a maximum of three days before the condition is expected to occur. In other words, you may come across a NOTAM reporting a condition that is not yet in effect.

To check NOTAMs, all you need is a phone or computer. Traditionally, pilots would call flight service at 1-800-WX-BRIEF and receive NOTAMs along with weather and other information from a briefer. While that service is still available, NOTAMs are arguably more easily digested in written form.

The FAA has two official NOTAM websites. The first is pilotweb.nas.faa.gov. Pilot Web allows a search for NOTAMs by location, flight path, and radius. In addition, it also allows retrieved NOTAMs to be sorted by creation date, effective date, expiration date, and keyword. FAA’s alternative NOTAM website is notams.aim.faa.gov/notamsearch. This website provides much of the same functionality as Pilot Web, however, it also provides an archive search and plain language translation options.  I recommend trying both to see which website you prefer.

Of course, there is a myriad of other online options for checking NOTAMs. Many online flight planning tools allow the user to check NOTAMs. The State’s weather reporting service through Schneider Electric is one such example. Information on how to register for this free service can be found on our website.

The best way to improve your NOTAM deciphering skills is to do it regularly. Unfortunately, changes in how NOTAMs are reported can confuse even the most experienced NOTAM decoders.

In the next issue of the WisDOT Bureau of Aeronautics Report, I’ll take an in-depth look at field condition NOTAMs and how recent changes have affected them. To find out more about NOTAMs in general, refer to FAA Order JO 7930.2R and Advisory Circular 150/5200-28F.