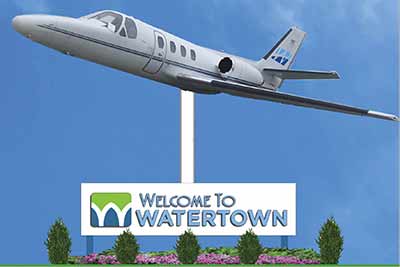 A Cessna Citation symbolizes the impact general aviation has had on the local economy in Watertown, Wisconsin. Wisconsin Aviation, Inc. Photo

WATERTOWN, WIS. – Earth-bound travelers entering Watertown’s main southern entrance are now greeted by a beautiful Cessna Citation 500 mounted on top of a 21-foot pole. The Citation was purchased for its engines and then stripped of all valuable parts. The fuselage was donated by a longtime Watertown Airport user. Other individuals either donated funds or services to make the monument a reality.

In addition to being a stunning visual “Welcome to Watertown” symbol to people driving into town, the Citation serves to mark the city’s airport and symbolizes the impact general aviation has had to commerce in the community. It is also hoped that seeing the monument will spark imaginations and increased interest in aviation.