EDITOR’S NOTE: This article appeared in the January 2020 issue of ABS Magazine. It is being reprinted here by permission of the American Bonanza Society (ABS) in the interest of safety.

The American Bonanza Society Air Safety Foundation (ABS/ASF) took the unusual step of going to the FAA to request an airworthiness directive to address a critical flight controls safety issue. The result, AD 2019-21-08, is a textbook example of airworthiness and regulation done right – the type club and its maintenance experts collectively found a problem, we brought our concerns to the FAA and the manufacturer, and the type club created and promoted a recommended inspection so that the issue is addressed by aircraft owners – even before time permits for rulemaking to occur. Additionally, we shared our members’ inspection results with the FAA and together limited the focus based on the actual data that emerged from ABS’ voluntary inspection program, and the FAA acted on our recommendations to ensure safety across the entire fleet. Thanks to the FAA, and especially the engineers and management of the Wichita Aircraft Certification Office, for working cooperatively with the ABS Air Safety Foundation to achieve a speedy, yet measured response to this serious airworthiness condition.

In late 2018, ABS Lead Technical Advisor, Bob Ripley, was asked by the National Transportation Safety Board (NTSB) to act as a party to two separate investigations involving Beech Bonanzas. In both cases, inflight separation of the right aileron control cable caused the pilot not only to lose aileron control, but because of the Bonanza’s interconnect between aileron and rudder, for the left aileron to go to a hard, full-up position, while the right aileron remained uselessly in trail. In both cases, the pilot was able to land using rudder for bank and heading control. Both of these events are still under NTSB investigation.

Bob and Curtis Boulware began inspecting control cables in airplanes that passed through their shops. We quickly found dozens of cases that share the same profile: the right aileron cable swaged ends, where they connect to turnbuckles, were corroded and in many cases completely failed. The safety wire is all that holds the aileron cable together in this condition. In almost all cases, the corrosion or failure is completely invisible unless the safety wire is removed – something that does not happen in the course of normal inspection. Bob Ripley even found a completely failed swaged end on his personal Bonanza, one that obviously is very well maintained.

We began presenting the need for removing safety wire and inspecting all cable connects in our pilot and mechanic seminars in January 2019. We asked members to send us reports of what they found, both good and bad. We quickly found that failure is limited to the right aileron cable connection at a point where the turnbuckle is directly beneath the aft cabin heat duct. Evidence strongly suggests that routine condensation off that duct drips onto the turnbuckle, and the safety wire – necessary to preserve control in the event of cable failure – ironically traps this moisture against the swaged end and promotes corrosion. By early February, we had over 25 known cases of complete cable failure beneath the safety wire, some even where the aircraft are based in dry areas like New Mexico.

ABS/ASF published a recommended inspection procedure and promoted it using all the Society’s communications outlets, as well as press releases through AOPA, EAA and the aviation media. We asked our members to submit results to us, as well as remind their mechanics of the need to file Service Difficulty Reports in cases of damaged or failed cables.

The data we received from voluntary inspections helped ABS/ASF quickly narrow the focus of the issue: 1964 through 1977 Bonanzas and Debonairs. Earlier airplanes do not have the aft cabin heat duct that travels over the turnbuckle. Later Bonanzas, all Barons and Travel Airs have aileron turnbuckles in the wheel wells, so while cable corrosion is still possible (easily seen during annual inspections), there is no safety wire in that area to trap moisture against the control system. ABS/ASF revised its recommended inspection in response to this new information and began promoting it heavily to our members in April 2019. We told our members not to wait for the government to tell them they need to address this vital safety issue.

We took our data to FAA in late February 2019, and in a separate meeting, presented our data to Textron Aviation. Both were unaware of the issue. As more data came in and we focused on the inspection, we updated both parties. FAA’s first response was to propose a very costly and unnecessary preemptive control cable replacement for all ABS-type airplanes at each 15 years in service – over $10,000 per airplane. We countered with an “inspect and replace as necessary” protocol that was ultimately accepted by the FAA.

In April 2019, ABS/ASF formally requested the FAA to issue an airworthiness directive requiring inspection and replacement as necessary of control cables in 1964-1977 Bonanzas and Debonairs. We made this unusual request for four reasons:
1. The chat lines revealed reluctance among some owners to conduct the inspection, and resistance by some mechanics to conduct the inspection thoroughly since it was not mandated.
2. We publicized this issue extensively in and out of ABS publications, including through EAA and AOPA, but not everyone was getting the word. Only an AD would directly contact all owners and their mechanics.
3. We wanted to limit the scope and cost of compliance to only those airplanes susceptible to the problem, with replacement limited only to those airplanes with damaged cable connections.
4. We wanted owners who had voluntarily had their airplanes inspected to get credit for doing so, and not be financially penalized by having to do the inspection again after issuance of an AD.

Ultimately, the FAA accepted all of our recommendations.

The FAA published AD 2019-21-08 on November 7th. We were surprised that the AD requires only a one-time inspection, despite the ABS Technical Advisors’ recommendation that there be a five-year repetitive inspection requirement to prevent and detect future corrosion and failure. In what may be an industry first, the AD recognizes voluntary inspection of the affected area in accordance with ABS/ASF’s recommended procedure, properly documented as suggested by ABS/ASF, as meeting the requirements of the AD. Owners who did the right thing and had their airplanes inspected as soon as we knew of the critical airworthiness threat would not be penalized by having to do the inspection done again.

We were concerned that the AD was published as a Final Rule, giving owners less than six weeks to complete the inspection. More disturbingly, AD 2019-21-08 included four earlier models of Bonanzas that do not have the aft cabin heat duct. I immediately contacted the FAA, which told me the inspection interval is set by the manufacturer, and that the additional models were added on recommendation of Textron Aviation, which claims those models also have this extended heat duct. That same day I researched, wrote and delivered formal comments to the Notice of Proposed Rulemaking (NPRM) using illustrations from Beech publications showing these airplanes do not have the extended aft heater duct and were added to the AD in error. In a separate formal comment, ABS/ASF requested an extension of the compliance deadline to give FAA and Textron Aviation time to rectify the error, and ABS members to schedule the inspection during the busy holiday season.

Less than two weeks later, the FAA published AD 2019-23-10. This new AD supersedes 2019-21-08 and is identical, except that the K35 – P35 models are removed from this list of affected aircraft. According to the AD, owners of 977 Bonanzas were spared the time and expense of an unnecessary inspection solely as a result of the swift corrective input of the ABS Air Safety Foundation.

Although the short compliance deadline is still in effect, inspection and any repairs must have been completed as of December 22, 2019. As of this writing (December 4), the FAA had yet responded to ABS/ASF’s request for an extension. If that happened, you would have already been notified by email from ABS and have seen it on the ABS website.

With input from the ABS Technical Advisors, we will be publishing recommendations for ABS members to avoid future corrosion and failure of aileron control cable connections. Our plan is to have these suggestions posted on bonanza.org by January and published in the February ABS Magazine. A little prudent (and necessary) preemptive action at each annual inspection, when the IA is supposed to be visually inspecting, cleaning and lubricating this area already, is valuable; a voluntary repeat of the AD inspection at the fifth annual inspection after AD compliance and every five years thereafter is a good idea, whether mandated or not. Watch for the ABS Technical Advisors’ best practices for preventing control cable swaged end corrosion and cracking at www.bonanza.org and in ABS Magazine. 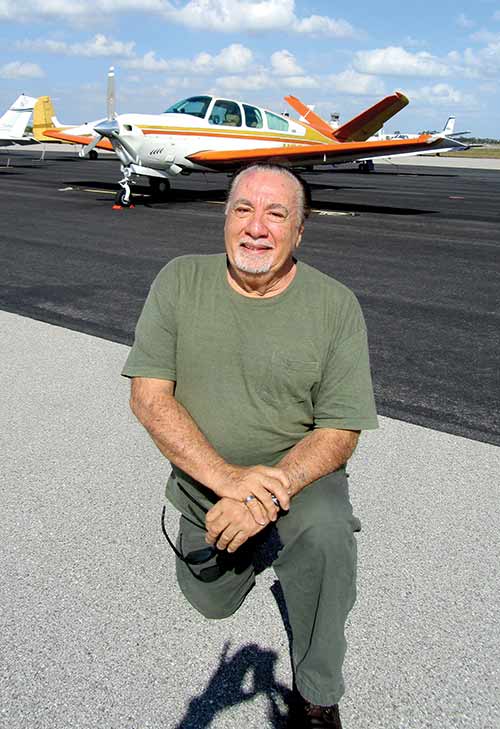 As soon as Anthony Restaino of Pembroke Pines, Fla., learned about possible corrosion of his aileron control cables on his 1964 Beech S35 V-Tail Bonanza, he checked and indeed found corrosion and had the repairs done immediately. In almost all cases, the corrosion or failure is completely invisible unless the safety wire is removed – something that does not happen in the course of normal inspections. Dave Weiman Photo

A “type club” takes a big chance with its membership when it goes to the FAA asking for an AD to be issued against its members’ airplanes. At the ABS Air Safety Foundation, we don’t take our mission to protect lives and preserve the Beechcraft fleet lightly. Our members’ response in this case has been almost universally positive, with expressions of gratitude not only for making them aware of a potentially catastrophic control failure in flight, but also for proactively limiting the compliance requirements on the basis of actual data. What began as a potential $10,000 or more complete control cable replacement for owners of every Beech Bonanza, Debonair, Baron and Travel Air, became a highly focused inspection and repair as necessary, affecting only about 3,100 airplanes where a very real hazard exists. We could only do this because many of you voluntarily inspected your airplanes and provided ABS the data we needed to address the real problem. The FAA’s assistance was also invaluable in focusing the AD requirement, then swiftly replacing the first AD to address its error.

This has been the perfect example of an informed FAA response using the expertise of type clubs. We’re also on track for a record level of fundraising for the year and our membership number is higher that it has been in over a decade, in part because our members know we’re using their gifts to proactively look out for their safety. Thank you for your help.