A Flight To End Polio

If you ask Peter Teahen of Cedar Rapids, Iowa, why he is flying a single-engine airplane around the world, he will smile and softly say, “I was inspired as a young pilot.”

Teahen recalled once hearing a fellow pilot and his son at a local flying club describe their adventure flying their Cessna 172 from Iowa to Alaska. It was then that Teahen first got inspired to likewise fly on a lifetime adventure to Alaska. More recently, Teahen recalled reading the stories of pilots who had flown around the world.

“I read that only 700 pilots in history had circumnavigated the globe in a single-engine aircraft, and that fewer than 300 of those pilots are still living.”

As a funeral director, Teahen witnessed way too many people who never fulfilled their lifelong dreams. As he read about those 700 pilots, he realized that after 48 years of flying, it was time to make his dream of adventure come true. But simply flying from Iowa to Alaska would not be enough. Teahen started making plans to fly to Alaska, but in a roundabout way – around the world!

Teahen laughs as he recalls telling his wife that he was going to fly their Piper Lance solo around the world. She smiled, saying it was a wonderful idea and that she couldn’t wait to hear about how the plans develop. Teahen didn’t sense the proverbial pat on the head until about 3 months later. After sharing his vision of the flight with his wife, she realized her husband was serious and said something to the effect of, “No, you are not flying 20,000 miles and visiting 17 countries in a single-engine airplane by yourself. That’s crazy!”

That got Teahen thinking of who else might make the trip with him. He thought of pilots he has known over the years, and casually mentioned the flight to a few. Everyone found the idea interesting, but took a pass, except for John Ockenfels, a retired business executive from Iowa City, Iowa. Over the years, Teahen and Ockenfels who were cousins through marriage, would often share stories about flying.

Ockenfels is a veteran aviator with nearly 4000 hours of flight time. He holds a commercial pilot certificate and an instrument rating.

The one strong commonality between Teahen and Ockenfels is their personal belief in humanitarian volunteer service to others. Teahen has been a volunteer disaster responder for more than 30 years, and Ockenfels has been extensively involved in supporting and meeting the needs of charitable organizations within his community.

At press time, the planned departure date from Eastern Iowa Airport in Cedar Rapids, Iowa, was March 24, 2020, but all was dependent on the spread of the Coronavirus. The virus threatened their access to some countries and the number of countries affected might have easily increased by then.

“We have been talking with U.S. health officials and our contacts overseas, who are suggesting warmer weather could diminish the threat enough not to impact our departure,” said Teahen. “We anticipate that the worse-case scenario would mean a delay of no more than 30 days.”

Teahen stated that the dates may also change due to other issues along their route which are out of their control.

“The 20,000-mile eastbound route has us facing one of our biggest challenges almost immediately, as we fly nearly 10 hours across the North Atlantic between St. John’s Newfoundland to the Azores,” said Teahen.

On their flights over hazardous water, Teahen and Ockenfels will be wearing immersion suits, and packing a five-man raft with emergency supplies, satellite phones and personal tracking devices. “Once the flight is underway, everyone will be able to visit our website at www.flighttoendpolio.com, and with only a 5-minute delay, see exactly where we are,” said Teahen. For this tracking, the pilots will be using services from FlightAware, AirNavRadarBox, and Flightradar24. The flight is estimated to take more than 135 hours of actual flight time over the course of 51 days. 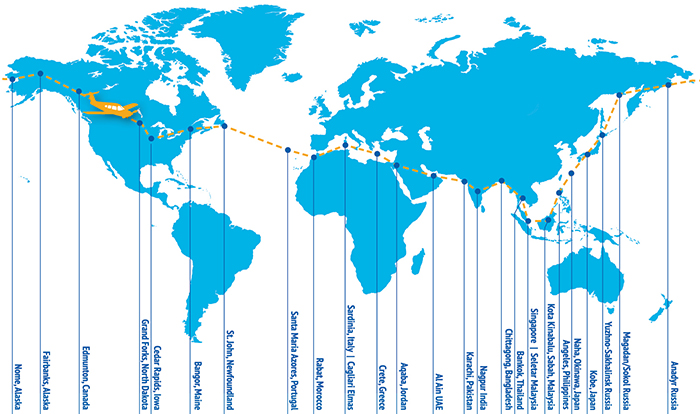 When N36194 takes off from Cedar Rapids, it will become the “Flight to End Polio.” At each of the 29 stops in 17 countries, the pilots will raise awareness by meeting with other Rotary members, humanitarian workers, and government officials to discuss the progress of polio eradication and the ongoing need for assistance for families still affected by the devastating disease.

While in Pakistan, Teahen and Ockenfels plan to meet with medical providers and victims suffering with polio. This will help them to better understand the needs of care teams and individuals afflicted by polio, so they can share those results with Rotary International.

While there have been great strides made in eliminating polio in the United States, it remains a highly infectious, savage disease, attacking thousands of people around the world. Polio most commonly affects children under the age of 5 and can spread from person to person, often through contaminated water. There is no cure, but polio is preventable with a simple vaccine. Ockenfels said, “Even though we’ve got all these countries that are polio-free, they have to keep vaccinating all of the kids that are born for years to come to ensure that it remains that way.”

The “Flight to End Polio” fundraiser has a huge helping hand from “The Bill and Melinda Gates Foundation,” which is donating $2 for each $1 pledged before, during, and after the flight. Both Rotary and The Gates Foundation are recognized as a leading force in the reduction of polio cases.

HOW YOU CAN HELP!

Fellow pilots are urged to “like” and “share” the Flight to End Polio Facebook page and make a donation to help end polio forever at www.flighttoendpolio.com.

Teahen purchased his 1978 PA-32RT-300 Piper Lance in 1990. The Lance is a single-engine, low-wing retractable gear aircraft, powered by a 300 horsepower Lycoming IO-540 engine. The Lance has a cruising speed of 150 knots and a 5-hour range. Teahen installed a 165-gallon fuel tank inside the airplane to supplement the 94 gallons in the wings.

Due to the lack of aviation fuel in most parts of the world, over 50% of their fuel stops will require the pilots to hand pump fuel from 55-gallon drums that have been shipped to airports along their route in advance by train or cargo ship.

PETER TEAHEN is president of Teahen Funeral Home in Cedar Rapids, Iowa, an author, and a mental health professional. He serves on the faculty at the University of Iowa and is the founder of the Cedar Rapids Freedom Festival.

Teahen has served in leadership roles on 67 major disasters throughout the world. He is recognized for his work on aviation disasters and is internationally known for his work in critical incident stress management and the psycho-social impact of disasters. He has served for 19 years as a national media spokesperson for the American Red Cross.

JOHN OCKENFELS maintains World War II aircraft, including his own North American Aviation T-6, a Boeing Stearman, and a Cessna 182 Skylane. Prior to his retirement, Ockenfels was the chief executive officer of City Carton Recycling, based in Iowa City, Iowa. He attended the University of Iowa and served in the United States Air Force from 1972 to 1976. For two of his four years in the Air Force, he was a crewmember onboard an AC-130 Hercules in Thailand.

Despite all the preparations, technical knowledge, and flight skill, Teahen and Ockenfels remain focused on their mission – ending polio forever! No child anywhere is safe until every child has been vaccinated. Teahen added, “Studies show that unless we end polio within 10 years, as many as 200,000 new cases could occur around the world each year.”