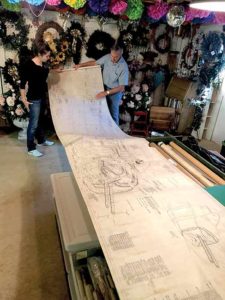 BEMIDJI, MINN. – AirCorps Aviation of Bemidji, Minnesota, has announced that it has acquired a collection of original North American Aviation engineering drawings. The drawings, part of the newly named “Ken Jungeberg Collection,” were stored in the archives of North American’s Columbus, Ohio factory until 1988. Each drawing is hand-drawn in pencil on tracing vellum, and was used to develop and build the iconic World War II aircraft we know and love today.

Ken Jungeberg was the head of the Master Dimensions Department in Columbus in 1988 when the factory closed its doors. That’s when he heard that the company was planning to burn all the World War II-era drawings in their archive. Jungeberg decided that he had to do something, and began writing letters and making phone calls. Through a twist of fate involving a burst pipe in the archives, he was able to take ownership of approximately 15,000 of these drawings, that included information on the P-51, B-25, T-6, P-82, and more, and stored them in his basement and hangar for the next 30 years.

While copies of aircraft drawings from this era are not uncommon, few individuals have ever seen a hand-drawn original. The drawings in Jungeberg’s collection largely represent both the production drawings and the experimental work that North American’s draftsmen created while developing parts and assemblies that would later be finalized. A perfect example being the drawings distinguished as 73X. These drawings were used to develop the flagship P-51 Mustang in just 120 days in 1940, and have never been seen by the general public. 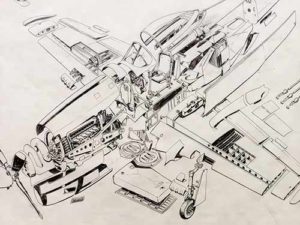 AirCorps Aviation learned of Jungeberg’s collection in early 2019, and in December he agreed to transfer ownership to AirCorps. As the new custodian of this important collection of drawings, AirCorps plans to catalog and organize the drawings so they can be utilized by the vintage and legacy aviation industry for the first time in history.

“These drawings are going to change what we know about the amazing aircraft that North American manufactured during World War II,” says Erik Hokuf, General Manager of AirCorps Aviation.

AirCorps unveiled examples from Ken Jungeberg’s collection at the National Warbird Operators Conference (NWOC) in Mobile, Alabama in February 2020, and hopes that others will share their feeling of excitement at viewing these “technical works of art.”

AirCorps Aviation is an aircraft restoration facility that focuses on returning World War II-era aircraft to flight while championing the legacy of the men and women of the greatest generation who sacrificed everything for their country. The aircraft restored by AirCorps Aviation have won numerous awards and received international acclaim. Website: www.AirCorpsAviation.com, Facebook page: https://www.facebook.com/aircorpsaviation/, Blog: https://www.aircorpsaviation.com/ken-jungeberg-collection/