The Sun Shines Bright On Runway 27

Q: Why do airport engineers layout a runway to align perfectly with a setting sun? Recently (September 15th) I was landing at our local airport, Runway 27, at sunset. A rain shower had just passed over the airport. As I turned on to final approach, it seemed the setting sun was in alignment with the runway. As I got close to the runway, the glare from the wet runway almost blinded me, so I elected to go around and loiter (and thanks for your explanation of that in the Oct/Nov 2020 issue of Midwest Flyer Magazine) for 15 minutes until the sun set.
A: You did the right thing by aborting the landing. Every day of the year, the sun will set at a slightly different position. In September and March, the sun sets at about due west. In the winter, the sun sets further south, so it could impact Runways 24, 25, or 26.  In the summer, the sun sets further north, and could affect Runways 28, 29 or 30. At many locations in the Midwest, the primary wind direction is from the west, so any runway with a heading from 240 through 300 degrees (i.e. Runway 24, 25, 26, 27, 28, 29 and 30) would not be beneficial to most airport users. Regardless, other factors may dictate the heading of a runway, such as its length, airport layout, and development outside the airport perimeter. 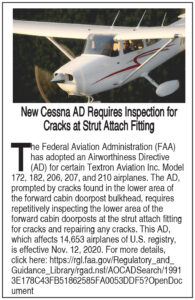 Q: I have learned that the “feds” are going to issue (mid-November, I am told) an Airworthiness Directive (AD) on many single-engine Cessnas, including one I am thinking about purchasing. The AD covers possible cracks and repairs needed on the forward cabin door post. The inspection reportedly should cost about $200, but if problems are found and repairs are needed, the repairs could cost from $6,000 to $10,000. After buying the airplane, I wouldn’t mind $200 for the inspection, but not $6,000 or more for repairs, especially just after buying the airplane. Should I stop the purchase?
A: I suggest you make the purchase subject to satisfactory inspection by your mechanic as part of your offer. If problems necessitating major repairs are found and you still want the airplane, it would be appropriate for your offer to be lowered by the cost of the estimated repair, plus a few bucks for downtime. However, depending on the make and model, if the aircraft is in high demand, the seller might demand – and get – full price!

Q: Occasionally I see ads for raffle tickets for an airplane by a worthy organization. Right now, the Alaska Airmen’s Association is holding a raffle for a completely rebuilt Super Cub. One ticket is $60. A completely rebuilt Super Cub might be worth way more than I could afford to pay, say $175,000 or so. I read the fine print and there will be a maximum of 14,000 tickets sold. Should I invest $60 in this very long shot?
A: The Alaska Airmen’s Association is a good organization that has raffled an airplane every year for many years. But you should read all of the fine print and be aware of a few things. First of all, if you win the airplane, you are probably going to have to pay “taxes” on the value of the airplane as if it was ordinary income. So, let’s say the airplane you win is worth $175,000. Add that to whatever your income is and look at your tax obligation. You said you could not afford to buy a $175,000 airplane. But can you afford to pay almost half that amount in taxes? People have won airplanes in raffles, but they have had to sell them just to pay the tax man. That said, your $60 and a lot of luck could possibly get you the $175,000 Cub you wanted, but your real cost at the end of the day to own that airplane could be more in the range of $80K or so. Still a good deal if you have the money. Before entering any airplane giveaway contest, or a lottery with a high dollar prize, I would urge you to seek the advice of your tax preparer on your tax liability should you win. Good luck?

Q: I am about to take my private pilot check-ride in the local FBO’s Cessna 152. After getting my private license, I think I will look for a really nice C152, which I think I could find for $35 – $40,000. I expect I would fly it about hour a week or so, thus 50 hours a year. Does that make financial sense?
A: No, for two reasons: 1) If you are only flying 50 hours a year, it would be less expensive to continue to rent, rather than to own. Owning requires fixed costs, such as hangar rent, annual inspections, insurance, etc., which alone could almost equal what you would pay to rent an airplane for 50 hours a year. Throw in the cost of fuel, fees, routine maintenance, etc., and you will be in the hole financially, owning rather than renting. 2) If you are going to buy an airplane for $35,000 – $40,000, I would urge you not to buy a C152. Get an older Cessna 172 or one of the many older Piper Cherokees. A $40,000 C172 or Cherokee will carry more, go faster and further, and have more room than a C152. C152s are great training airplanes, but like most trainers, they are not real comfortable, slow, and don’t carry much fuel. There is a lot to be said for the enjoyment and convenience of owning your own airplane, and after buying an airplane, you may find yourself flying more than 50 hours a year.

Q: I am planning to build a hangar at our local airport next spring.  The way the taxiways are laid out, I can build the hangar with a door facing east or west, but not south, which would be my preference. What would you do?
A: I agree…facing south would be preferred, especially here the Midwest where we can substantial amounts of snow. A southern exposure will melt the snow and reduce ice build-up. But if that is not possible, I would opt to build with the door facing towards the east. In winter, the sun shining from the southeast will provide some snow/ice ramp melting for your morning departures, while a ramp and door facing the west, will not see any sun until afternoon when temperatures are on the decline.

Q: A Piper classics question for you: My friend (a self-described Cub nut) has a 1947 PA-12 Super Cruiser and 1967 Super Cub. He loves them both and tells me the Super Cruiser is faster in cruise but needs a longer distance to land and takeoff than the Super Cub. Since their appearance, shapes of their wings, weights and power (the original 115 hp in the Cruiser was replaced with a 150 hp engine, same as the Super Cub) are similar, why the difference in landing and takeoff distance? Have you ever flown or owned either?
A: I am a lucky guy and have flown both models and once was part owner of a Super Cub. 1) The Super Cub has flaps which reduce stall speed to about 44 mph vs. 49 mph for a Super Cruiser with no flaps. 2) The wing angle of incidence on a Cub is a little higher than on a Super Cruiser, so with both airplanes sitting on the ground in a 3-point attitude, the Cub will have a slightly higher angle of attack, allowing a slower speed for liftoff.

EDITOR’S NOTE: Pete Schoeninger is a 40-year general aviation veteran, starting out as a line technician as a teenager, advancing through the ranks to become the co-owner and manager of a fixed base operation, and manager of an airport in a major metropolitan community. He welcomes questions and comments via email at PeterSchoeningerLLC@gmail.com (peterschoeningerllc.wordpress.com).

DISCLAIMER: The information contained in this column is the expressed opinion of the author only, and readers are advised to seek the advice of others, and refer to aircraft owner manuals, manufacturer recommendations, the Federal Aviation Regulations, FAA Aeronautical Information Manual and instructional materials for guidance on aeronautical matters.