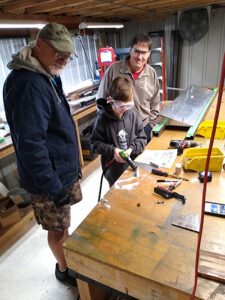 About two years ago, four pilots at Abraham Lincoln Capital Airport in Springfield, Illinois, had the unique opportunity to promote a Science, Technology, Engineering and Math (STEM) program utilizing aviation as the catalyst. There are many ways to promote STEM-type projects, but the construction of an aircraft combines several disciplines that support the concept. Students do not only observe the complexities of aircraft construction, but actually get the opportunity to develop and use their motor skills during the process.

To get the ball rolling, or perhaps the “prop turning,” a not-for-profit tax-exempt corporation named the “Aircraft Builder Education Center” (ABEC) was formed to keep the costs low and provide the legal framework for the project. When another pilot and aircraft builder decided to hang up his rivet gun, ABEC purchased his “boxed” Zenith CH-650 kit and all of his tools, jigs and equipment.

After relocating to a T-hangar with extra room for a large table and storage, the stage was set to begin the project. Concurrently, ABEC notified the Springfield Airport Authority of its intentions to use the project for a STEM program. Since there is commercial air service at the airport, security is a major concern, so the notification also informed airport officials that there would be some extra activity in the T-hangar area.

To show their support, the airport authority has helped with the project by issuing a multi-year grant to ABEC to help defray some of the expenses, since the entire project is being accomplished through individual donations. When completed, the aircraft will be used for EAA Young Eagles flights sponsored by EAA Chapter 770.

Recently, Abraham Lincoln Capital Airport Director Mark Hanna and board member and retired Illinois DOT Director of Aviation, Dr. Susan Shea, visited the hangar to personally see the progress that has been made on the project. Aside from many small details, the remaining large project is to fit the canopy to the fuselage.

Covid-19 has impacted the project, as it has everything else in our lives today. Extra precautions were and are being taken with regard to social distancing, sanitizing, and the wearing of masks.

When looking at the photographs accompanied with this article, you will see a lot of smiles and determination in the faces of participants in the pictures taken “pre-Covid-19.” For the later ones, we had the participants remove their masks long enough to take a picture.

With any luck, ABEC is hoping to get the aircraft airborne yet this year (2020). When the requisite flight hours have been completed, the kids who participated will be invited to go on an EAA Young Eagles flight in the aircraft to witness firsthand the fruits of their labor.

EDITOR’S NOTE: Jim Bildilli is a former official at the Illinois DOT Division of Aeronautics. He is currently an airport consultant and contributing editor to Midwest Flyer Magazine. Jim and his wife, Donna, head up the Aviation Explorers Post encampment at EAA AirVenture Oshkosh, where Explorer Scouts from throughout the U.S. help with parking aircraft.