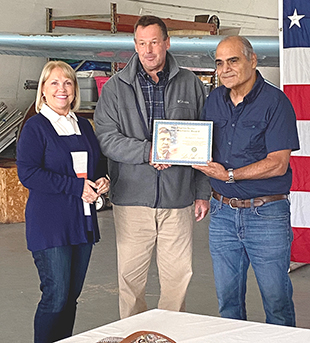 Richard C. Juarez of Portage, Wisconsin, has been awarded the “Charles Taylor Master Mechanic Award” by the Federal Aviation Administration (FAA). The award was presented to Juarez this fall by FAA Safety Team (FAAST) Representative Jurg Grossenbacher of the Milwaukee Flight Standards District Office at ceremonies held at Portage Municipal Airport, where Juarez is an airframe and powerplant mechanic.

This prestigious award recognizes the lifetime accomplishments of senior aircraft mechanics who have served for 50 or more years. The award is named after Charles E Taylor, the Wright Brothers’ mechanic, who is credited with designing and building the aircraft engine used for their first successful flight on December 17, 1903 at Kitty Hawk, North Carolina. In attendance for the award presentation was Juarez’s wife, Kelly, his daughter, son and six grandchildren, and many friends.

To be eligible for the Charles Taylor Master Mechanic Award nominees must be a U.S. citizen and hold a U.S. Civil Aviation Authority (CAA) or Federal Aviation Administration (FAA) mechanic or repairman certificate, have 50 or more years of civil and military maintenance experience of which up to 20 years may be U.S. military experience, or worked as an uncertified person in a U.S. aviation maintenance facility that maintains U.S. registered aircraft, either domestic or overseas, or as an uncertified person in the aircraft manufacturing industry in the United States, producing U.S. type-certificated or U.S. military aircraft. The 50 years may be computed consecutively or non-consecutively. Revocation of any airman certificate disqualifies a nominee for the award.

All award recipients are admitted to the Charles Taylor Master Mechanic Award Roll of Honor: https://www.faasafety.gov/content/MasterMechanic/RecipientList.aspx