The First Pilot To Break The Sound Barrier, Chuck Yeager, Dies At 97

GRASS VALLEY, CALIF. – The first pilot to fly faster than the speed of sound, Chuck Yeager, died December 7, 2020 at the age of 97.

As a captain in the Air Force, Yeager broke the sound barrier on October 14, 1947 at the age 24 flying the Bell X-1 rocket plane beyond 660 mph. Yeager nicknamed the Bell X-1 – and all of his other aircraft – “Glamorous Glennis,” after his first wife, who died in 1990. 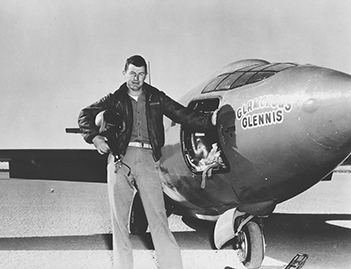 Chuck Yeager with the Bell X-1 he named “Glamorous Glennis” in which he broke the sound barrier with on October 14, 1947. U.S. Air Force Photo

Yeager married Glennis Dickhouse of Oroville, California in 1945, and they had four children: Donald, Michael, Sharon and Susan. Yeager then married Victoria Scott D’Angelo in 2003.

Yeager grew up in the hills of West Virginia, and stayed active flying military aircraft, including the F-15 at nearly 1,000 mph at Edwards Air Force Base in Edwards, California in October 2002 at age 79.

Yeager was a familiar personality at 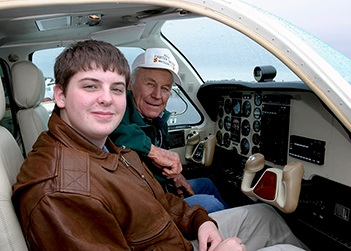 EAA AirVenture in Oshkosh, Wisconsin, and could often be seen walking the flight-line with his lifelong friend and wingman for his supersonic flight, Bob Hoover. Yeager admired Hoover greatly for his aerobatic ability and airshowmanship. Like Yeager, Hoover was a World War II fighter pilot and test pilot.

Yeager was awarded the Silver Star, the Distinguished Flying Cross, the Bronze Star, the Air Medal and the Purple Heart. President Harry S. Truman awarded him the Collier Air Trophy in December 1948 for having broken the sound barrier. He also received the Presidential Medal of Freedom in 1985.

Yeager retired from the Air Force in 1975 as a Brigadier General and moved to a ranch in Cedar Ridge in northern California where he continued working as a consultant to the Air Force and Northrop Corp, and flew, promoted and demonstrated the Piper Cheyenne III around the country in the 1980s.

Yeager said in his book Yeager: An Autobiography, “Living to a ripe old age is not an end in itself. The trick is to enjoy the years remaining.”