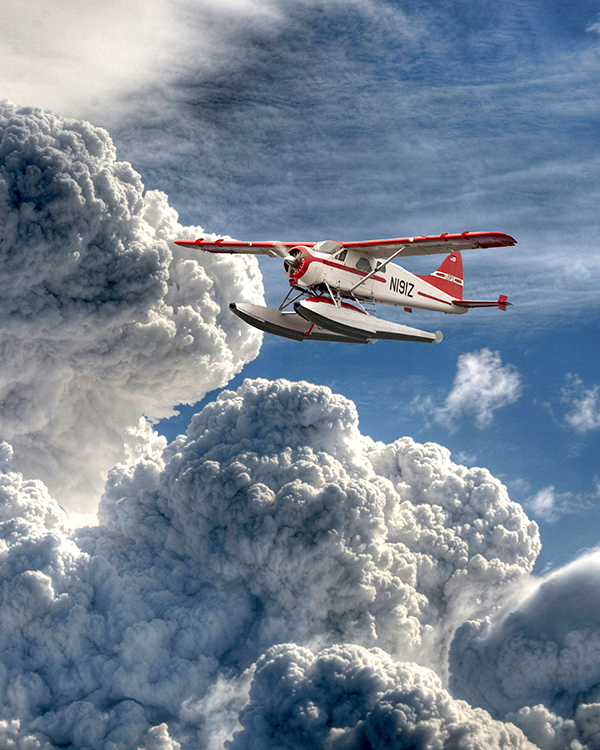 Nearly A Century of History

With beginnings dating back to 1929, the U.S. Forest Service (USFS) Beaver Program, based at the Superior National Forest Seaplane Base in Ely, Minnesota, has a long and rich history that precedes even “Smokey Bear.” Local seaplane pilots began flying fire detection flights and hauling fire crews for the Forest Service in 1929, and in 1935, the first contract was issued for seaplane usage. The Forest Service acquired its first dedicated aircraft to support the Superior National Forest in 1938, a four-seat Stinson SR6A floatplane, and the program has been in continuous operation ever since. Construction of a hangar, dock and ramp on Shagawa Lake in Ely was started in 1941 and expanded in 1961 to accommodate a growing fleet of aircraft. 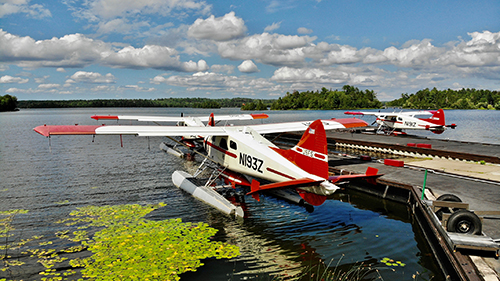 Over the years, the program has utilized a variety of aircraft, including the original Stinson, as well as two other Stinson 108 Station Wagons, a Piper J-4 Cub Coupe, Norseman, Seabee, and several Cessna 180 and 185 Skywagons. The current fleet of three de Havilland Beavers was acquired in 1957, 1959 and 1967. Two of the three Beavers were purchased directly from de Havilland and have spent their entire lives operating out of Shagawa Lake. The third Beaver is a military model that served for several years in the U.S. Army before the Forest Service acquired it. Any time the ice is out in northern Minnesota, all three aircraft are on EDO 4930 straight floats with a 125-gallon water bombing tank installed. In winter, the aircraft are pulled off floats and put on 8.50 X 10 wheels with de Havilland hydraulic wheel skis attached.

Modifications to the aircraft include the Wipaire 5600-pound gross weight increase kit, a ventral fin on the underside of the aft fuselage and Kenmore Sea Fins on the ends of the horizontal stabilizer to improve directional stability, and Garmin G500 glass panel instrumentation, along with two independent GTN 650 GPS/COM/Navigator units. Two VHF and two FM radios, in addition to an 800 Mhz input for fire and law enforcement handheld radios, provide extensive communication capabilities. A camera port on the underside of the fuselage allows installation and use of a tree-seeding hopper, as well as a fish stocking tank, both of which, along with the water bombing tank, were custom fabricated at the hangar in Ely. 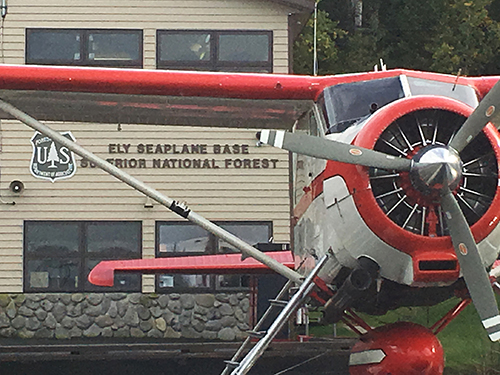 USFS DHC-2 Beaver in front of the Superior National Forest Seaplane Base in Ely, Minnesota.

The program is usually staffed with three full-time Beaver pilots and in the past has hired contract pilots during the summer. A full-time airframe and powerplant mechanic with inspection authority privileges is also employed year-round. The hangar/maintenance facility on Shagawa Lake in Ely is fully equipped to conduct aircraft configuration changes and 100-hour and annual inspections in addition to most service bulletin and airframe directives that apply to the three 60-plus-year-old Beavers. 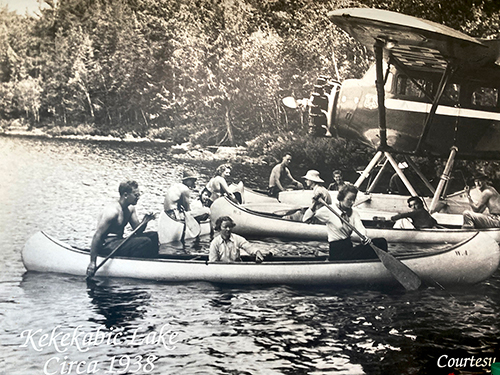 The program’s primary area of responsibility is the 3 million-acre Superior National Forest in northeast Minnesota. Included entirely within the forest is the 1 million-acre Boundary Waters Canoe Area Wilderness (BWCAW). The entire wilderness prohibits aircraft from flying below 4,000 feet mean sea level (MSL). USFS Beavers routinely receive permission from the Superior’s forest supervisor to fly inside the prohibited areas, and to take-off and land when conducting fire, search and rescue, or law enforcement missions, as well as Department of Natural Resources fisheries support and wildlife and forest survey flights.

The Beaver’s impressive load-hauling capabilities, short take-off and landing performance, and reliability make it the perfect aircraft for an operating area short on roads and runways, but long on water and ice.

When fire indices reach certain levels, routine fire patrols are flown, usually in the afternoons when relative humidity is at its lowest daily level. Pilots fly standard routes over the Chippewa National Forest in early spring, and then over the Superior National Forest from May through September or October. Any previously unreported smoke or fire is reported to the Forest Service operations desk in Grand Rapids, Minnesota, which coordinates further action.

The Beavers can provide a fire size-up: a detailed report on incident location, size, characteristics, spread potential and threatened structures. For fires in locations that are easily accessible by ground forces, the pilots can help direct firefighters on the quickest approach and report winds and progression. For remote fires that are more difficult for ground forces to access, or any fire that threatens structures or has limited water sources, ground forces or dispatch can direct the Beaver to conduct initial attack via scooping and dropping water with the water bombing tank. The tank is permanently installed; however, the pickup tube is carried inside the aircraft until initial attack is requested. Depending on the proximity of the water source, the pilot can drop water on the fire every three to four minutes.

When fires become too large for the Beaver to effectively drop water, the pilots and aircraft instead begin to transport firefighter crews and gear to the scene. Typical loads include two firefighters with various gear, pumps, hoses, Pulaskis, axes, chainsaws, fuel, food, etc. An aluminum canoe is strapped onto the left float, and the pilot drops off the crew as close as safely possible to the fire. Sandy beaches are not common in the BWCAW, so the pilot will then usually shut down in the middle of the lake and drifts while loading the crew and their gear into the canoe to paddle the rest of the way. Often, crews will paddle home after the fire, but the Beavers can also bring the crews out. Whenever firefighters are in the field, the Beavers are on standby to transport injured individuals.

With its long loiter time, excellent visibility and slow flight characteristics, the aircraft can carry an air tactical group supervisor along and serve as an air attack platform to provide positive air control and coordination between air and ground forces on larger fires.

The Beaver program has a standing agreement with the Minnesota counties of St. Louis, Lake and Cook to provide year-round aerial support for search and rescue, medevac, body recovery and law enforcement missions. Most of these flights are within the BWCAW, as there are no roads and mechanical access is generally not permitted. Usually occurring in May to September, common scenarios involve dehydration, broken bones or sprains, axe wounds, heart attack or stroke symptoms, overdue parties or individuals, or a SPOT or InReach device being activated inadvertently. The Beavers average one to two body recoveries per year for drownings or heart attacks. An EMT is carried for any medevac situation, and a law enforcement officer for any search or non-medical incident.

Wildlife surveys make up a good portion of the annual flying. The program has provided over 35 years of continuous support to the U.S. Geological Survey by flying year-round survey flights with wildlife biologists tracking radio- and GPS-collared wolves and deer, as well as conducting beaver survey flights in the fall. Forest Service surveys for bald eagles are also flown in the spring.

The program also supports the Minnesota Department of Natural Resources with fish-stocking operations and surveys of remote lakes. Fish stocking involves landing in the lake, shutting down and slowly releasing the fish from the internal fish tank through the camera hatch. If the lake is too small to land and the fish are the correct size, aerial release is possible. For lake surveys, the planes carry two biologists, along with six to eight 250-foot experimental gill nets, camping gear, outboard motor and gas, and a 19-foot square stern canoe strapped on the float.

Springtime flights include installing a hopper to broadcast tree seed to restock previously harvested areas. The Beaver flies 40-foot-wide strips at approximately 80 mph and 50 feet above ground level (AGL) to spread the seeds, primarily spruce or jack pine. A 40-acre plot can typically be completed in 10-15 minutes, and multiple plots with different seed types can be completed during a single flight.

The future of the USFS Beaver program remains as bright as ever. Under Forest Service Eastern Region fire and aviation management, plans are underway to expand the use of these aircraft and pilots beyond  northern Minnesota to better serve Forest Service aviation needs in surrounding states and potentially throughout the region.