“I’m sitting in this airplane, and they are telling me it’s mine!
Published in Midwest Flyer Magazine – April/May 2021 issue 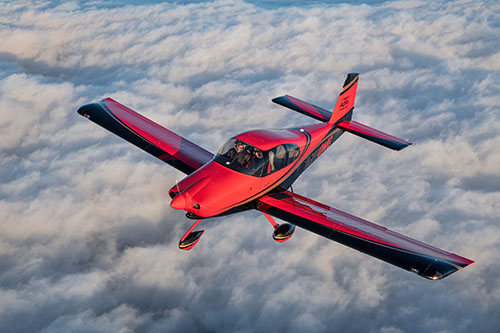 In addition to being an airline captain, Benedetti is an active general aviation pilot. He has owned several airplanes over the years, including a Pitts S1 and an Aeronca Champ. He flies with a friend in his friend’s RV–7, so he is familiar with the RV series, and the RV–10 is similar in many ways. He wants to use the RV–10 to visit smaller airports in the West: “My wife, Karen, and camping gear will fit nicely,” he said.

Benedetti learned to fly in the San Francisco Bay area before studying engineering during college at the University of California at Santa Barbara. He flew for a regional airline and then was hired by United Airlines in 1990. Today, he’s a Boeing 787 Dreamliner captain and mostly flies oceanic routes between San Francisco and Europe, Asia, and Australia. Benedetti is an avid paraglider who has been known to bring a backpack parachute rig on trips so that he can soar from mountaintops around the world on layovers.

How is the winning name drawn?

The sweepstakes drawing is completely random. An international judging organization in New York City handles the drawing and sends AOPA randomly selected entrants’ numbers with the prize assigned to each, so AOPA can deliver the prizes to the winners.

Experienced RV-4 owner, Dave Hirschman, flew the RV–10 to California in mid-January. The two-day, 15-hour flight from AOPA headquarters in Frederick, Maryland to Livermore loosely followed the transcontinental railroad route across the Rockies and Sierras. It also highlighted the impressive capabilities of the aircraft—the first experimental-category aircraft that AOPA has given away in more than 25 years of its sweepstakes.

The trip across the continent consisted of five three-hour legs: three IFR and two VFR. Altitudes ranged from 4,500 feet across the Ohio Valley to more than 11,000 feet over Lake Tahoe. The aircraft was built in Canada in 2007, and Edwin French—the amateur builder—made sure it was optimized for cold temperatures, which included a Tanis Aircraft preheat system (https://www.tanisaircraft.com/).

AOPA managed the restoration of the Sweepstakes RV–10 with master craftsmen over 18-months. Rob Hickman of Advanced Flight Systems designed and installed a three-screen, digital IFR instrument panel with an Avidyne IFD550 nav/com at its heart; Geoff Combs of Aerosport Products provided a carbon fiber panel and center console.

Van’s Aircraft will provide RV–10 transition flight training for Benedetti with Mike Seager, an Oregon instructor who has given thousands of hours of dual instruction in the RV series. Benedetti has the option of doing the training in his own airplane or in an RV–10 at Van’s Aircraft.