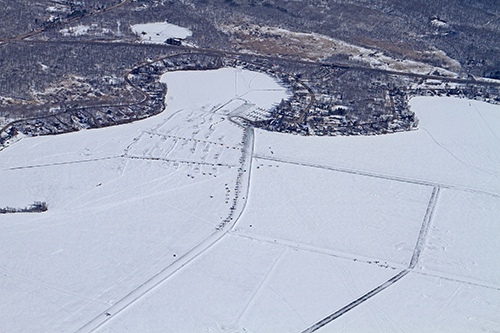 Aviators in Minnesota and Wisconsin look forward to the first weekend in March for several reasons: the days are longer, temperatures are warmer, and it is time for the ICEPORT Fly-In Brunch at Mac’s Twin Bay Resort on Lake Mille Lacs, Isle, Minnesota  (https://www.macstwinbay.com/).

Since 2013, pilots and their passengers have converged on the lake to share in a true winter get-together on ice. On Saturday, March 6, 2021, light winds and moderate temperatures prevailed, so it was a great day for winter flying!

Flags provided by Tanis Aircraft Products of Glenwood and Blaine, Minnesota, marked the end of “Iceway 09.” Aircraft lined up and landed long on the 80-foot wide by 5300-foot long iceway. Despite the warm spring temperatures, the lake was reported to have over 36 inches of ice to support the 153 aircraft that flew in.

After landing, pilots taxied in and parked under the guidance of volunteer marshallers. Brunch was served on shore by Da Boathouse restaurant.

There was a great mix of aircraft – singles, twins, classics, antiques and modern turboprops – that flew in over a span of two hours.

A Kodiak 100 garnered a lot of attention, spinning up its 8-foot prop on takeoff. In contrast, there was a 1947 Piper Cub Special powered by a 65 hp engine; a classic Piper twin; and dozens of modern and vintage Cessnas, including taildraggers, tricycles and amphibious floatplanes. The aircraft that flew the furthest was from Florida, and the most unique aircraft was a Delta Dyke.

A fly-in requires a lot of work and many volunteers. The driving force for ICEPORT is Mark Priglmeier of CreateLift Aviation LLC of Sauk Rapids, Minnesota, with sponsorship support from Doug Evink of Tanis Aircraft Products. Volunteers from nearby St. Cloud, Brainerd and Cloquet, Minnesota, showed up early and stayed late. Macs Twin Bay Resort and Da Boathouse restaurant plowed the iceway. Tanis Aircraft Products gave away a Tanis Engine Preheat System as the grand door prize, a Tanis Avionics/Cabin Preheater as the second-place door prize, and a SwitcheOn Celluar Remote as the third-place door prize. Each aircraft that landed this year was automatically entered in the contest. Winners were announced at 1:00 p.m. that day.

For some pilots, this was their first-time landing at ICEPORT…for others, it was their annual/would-not-miss-it-for-anything annual event. Be sure to put ICEPORT 2022 on your to-do list for next March.

Follow Facebook.com/CreateLift and download updates and flight procedures. You can also email createlift@gmail.com or call 320-200-8050 with questions. Pilots monitored 122.9 MHz this year.