The Man At The Helm of EAA Chapters

One very important role at the Experimental Aircraft Association (EAA) headquarters in Oshkosh, Wisconsin, is the Director for Chapters & Communities and the Manager of the Homebuilt Community. That person is Charlie Becker (EAA 515808). In his role, Charlie oversees the EAA chapter network and homebuilt programs. 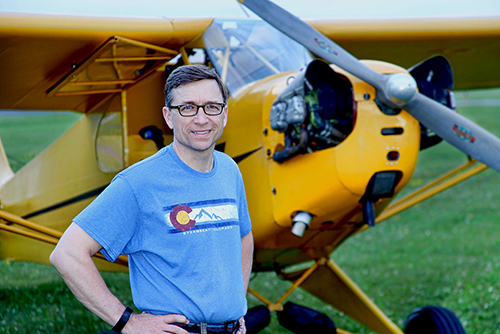 Charlie has worked for EAA since 1999. During that time, he created EAA’s Hints for Homebuilders weekly how-to video series, webinar program and oversaw the acquisition of the EAA SportAir Workshops.

Charlie is a lifetime member of EAA. He is the past president of EAA Chapter 252 in Oshkosh, Wisconsin, and has served as an officer in two chapters for more than 10 years. He has been a member of five chapters since joining Chapter 32 in St. Louis, Missouri in 1995.

Charlie is a private pilot and avid homebuilder. He built a Sonex and led the EAA staff in building a Zenith CH-750 STOL aircraft, as well as the 2014 and 2018 “One Week Wonder” projects. He currently has two aircraft under construction. The first aircraft is a “Pirate Cub,” which is a plans-built knock off of a Piper Super Cub. The second is a new homebuilt design by Adventure Aircraft, the EMG-6. The aircraft is a primary glider with the ultimate design goal of self-launching on electric power. Charlie is also a volunteer Technical Counselor. For more information on these projects, visit https://eaabuilderslog.org/?blproject&proj=7RBTypXd7 and www.facebook.com/EMG6project.

Charlie Becker lives in Oshkosh, Wisconsin with his wife, Theresa.

For additional information on getting involved in an EAA chapter near you, go to the EAA website at www.EAA.org/ and locate the “Chapter” page.