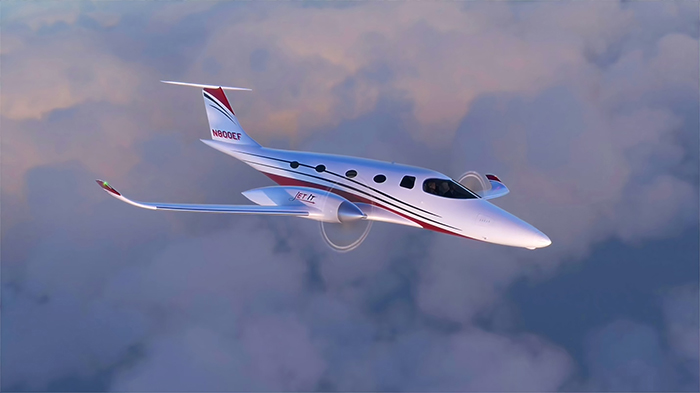 DENVER, COLO. – North Carolina-based Jet It and JetClub have announce that they have entered into an agreement to become the launch customers for Bye Aerospace, which developed the 7-passenger, all-electric, twin turboprop aircraft, eFlyer 800™.  Jet It and JetClub, sister companies operating in North America and Europe respectively, have signed a purchase agreement for a fleet of eFlyer 800 and four eFlyer 4™ aircraft. Jet It will operate the first fleet of electric aircraft in North America, eliminating the release of millions of metric tons of CO2 each year.

“The evolution of travel continues with this investment in sustainable aviation. At $1,600 an hour, our fleet of HondaJets is by far the cost leader in private travel and also, given the incredibly low-carbon footprint of the HondaJet, extremely friendly to the environment. The operating efficiency and zero emissions of the eFlyer 800 will allow Jet It and JetClub to deliver more value to travelers by further reducing the cost to travel while driving towards zero net emissions,” says Glenn Gonzales, co-founder and CEO of Jet It.

Slated to be in operation by 2025, the eFlyer seats up to seven passengers and one or two pilots. The eFlyer 800, expected to be the first-to-market all-electric seven-passenger aircraft, boasts cruise speeds of 320 knots, a ceiling of 35,000 feet, and eliminates emissions while reducing operating costs 5x. According to Bye Aerospace CEO, George, E. Bye, “The remarkable economy and flight performance from eFlyer 800 is ideal for Jet It, JetClub and their customers in the United States, Canada, Europe and beyond.”

Adds Gonzales, “Sustainability is a key pillar of our philosophy. We operate highly fuel-efficient HondaJets and use sustainable products in our cabin. While aviation contributes only 3% of global emissions, that is not enough for us. We want to be at 0% and today with this announcement, are investing towards that goal. Together with Bye Aerospace, we will achieve zero emission affordable air travel this decade. This is a momentous leap in aviation sustainability in our industry.”

Jet It utilizes a hybrid-fractional ownership model based on days – not hours – which provides owners with the freedom to use the fleet freely. Jet It can customize a customer’s day as they see fit. A Jet It owner based in Chicago, Illinois, picked up a client in Savannah, Georgia, flew to a meeting in Atlanta, stopped in Hilton Head, S.C. for some fresh seafood, then flew back to Chicago, all in one day. This trip would have been impossible with commercial travel, incredibly expensive to charter, and impactful for an individual using a jet card program. This is one of several examples of how Jet It owners utilize their jet to increase productivity and value (https://www.gojetit.com/).

JetClub is an innovative private jet usage model that combines the newest jet aircraft with a sharing economy to provide members with an affordable, private, fast and intelligent solution. Client members have the flexibility and convenience of owning a business jet without the traditional administration, concerns and expense. The Club has a dedicated flight operations team to take care of pilot training, maintenance, logistics and international operations, and a concierge desk that manages all travel details and trip support. It was co-founded by Vishal Hiremath and Glenn Gonzales for the Asia, Europe and South American regions (http://www.jetclubgroup.com).

Based at Centennial Airport near Denver, Colorado, Bye Aerospace specializes in the design and manufacture of electric aircraft, including the eFlyer family of aircraft. Bye Aerospace was named “2020 Small Business of the Year” by the Aurora, Colo. Chamber of Commerce and recognized as the “Most Innovative” in the 2020 Made in Colorado awards sponsored by ColoradoBiz magazine. Bye Aeospace was founded by George E. Bye, who is also Chairman and CEO.