August 3, 2021, was the 100th anniversary of an important event backing up Ohio’s claim as the “Birthplace of Aviation.” In 1921, less than two decades after the Wright Brothers became the first to achieve powered flight, another milestone in aviation history occurred 20 miles from the Dayton bicycle shop where Wilbur and Orville invented the airplane. Over a Catalpa tree grove near Troy, an experiment set up by the Ohio Department of Agriculture resulted in the first documented use of an airplane to apply crop protection materials. 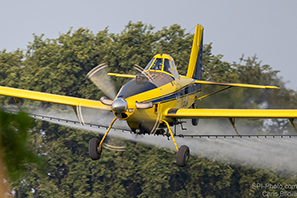 The history-making flight came as Ohio researchers were desperate for a way to prevent sphinx moth caterpillars from ravaging the state’s valuable Catalpa tree crop. Controlling the caterpillars with insecticide dust dropped from an airplane was a far-fetched proposition 1921, when farmers spread insecticides by hand and aviation was still in its infancy. U.S. Army test pilot, Lt. John Macready, taking off from what was then an aviation experiment station at McCook Field in Dayton, applied the insecticide from a World War I surplus biplane, using an improvised spreader device to deposit the dust evenly. The idea worked. The insect pests were successfully dispatched; the trees grown for use as telegraph poles and fenceposts were saved; and a practice now vital to crop production, wildfire-fighting and mosquito control was born.