MnDOT Weather Computers At Airports Get An Update… Printers Are Being Phased Out! | Midwest Flyer – General Aviation Magazine

MnDOT Weather Computers At Airports Get An Update… Printers Are Being Phased Out!

Over the past 30 years, we have seen a lot of changes in our ability to gather and display weather information at Minnesota’s local airports. MnDOT has a goal to make it as easy as possible for general aviation pilots to access last-minute weather and NOTAM information before departing, so they can make sound flying decisions with the best available information. To help with that goal, MnDOT’s Office of Aeronautics has established weather computers at each public airport in the state. We refer to those systems as the “MnWAS” computers, which stands for Minnesota Weather Access System. 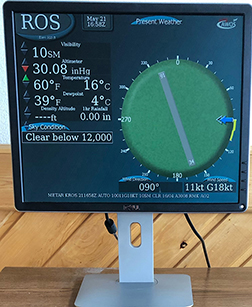 MnWAS computer users can report problems and submit comments about the new computer system, or anything airport related. Just click the “Report the issue here” link on the right-hand side of any MnWAS computer’s home screen.

The current MnWAS computers were installed around 2012 and have gone through several changes during the past nine years. Each system was originally deployed with a Windows 7-based computer, and a printer. The computer was then connected to an internet connection provided by MnDOT or the local airport.

We are in the process of moving away from Windows 7 and to a Chrome operating system. The project is about 50 percent completed, and we hope to complete the updates and printer removals within the next year. To the user, there will be no change in look and feel. But the computer will be running in Google’s Chrome browser.

When a user interfaces with the browser and completes their session, they may close all windows to reset the system and erase personal information that the user had entered. If the computer is left alone for 20 minutes, the new Chrome-based system self-resets and erases any personal information left behind.

The good news is that the electronics remain capable of serving the intended purpose. The bad news is that the printers that are currently installed are no longer supported, as there are no compatible drivers for these old machines. During the past year, MnDOT began installing the new Chrome OS on MnWAS computers and removing the old printers.

A number of people have asked about the plan for the printers. The answer is that MnDOT stopped supporting the printers in 2016 and decided to leave them in place until they failed. Now, with the OS change, the old printers will be retired and removed, and each airport will need to determine if a printer is needed. If so, the printer will need to be supported locally.

To keep this all simple, MnDOT is installing new switches at each airport as we update the internet connectivity. The new switches allow additional devices (like a printer) to be put on the network. We recommend that airports that wish to continue with an open printer, that they purchase a printer that supports wireless printing. This will allow a pilot to log on to the airport WIFI, see the printer, and print any documents they need. Wireless printers could work with mobile devices and pilot-supplied computers.

If you need (or want) to report a problem with any of the updated MnWAS computers or have any questions or comments about the new system or the airport, you can use the link on the right-hand side of any MnWAS computer’s default screen to do so. Just click the link, fill out the form, and it will be automatically routed to the appropriate MnDOT staff person. We love to hear feedback on how we are doing and new ideas on what would make airport operations better for the users. Smooth landings to all!