Aircraft Sales & Having Fun On Skis!

Q: Is the airplane market still strong? What do you hear from airplane sales professionals you know?
A: To get an up-to-the-minute report, I contacted aircraft broker, Jeff Baum, owner of Wisconsin Aviation in Madison, Watertown, and Juneau, Wisconsin; and Gavin Leake, an aircraft broker in Milwaukee and Burlington. As of October 14, 2021, this is what they had to say:
Baum: “The used airplane market has been acting very much like the housing market: good planes go immediately at exorbitant prices. Many first-time buyers are looking to buy an aircraft, particularly business aircraft. The inventory is very low. There are still reasonable prices on some older models, but buyers need to either really know aircraft or use a good broker. We are seeing many novice buyers making decisions based on what they have learned online and living to regret not getting professional advice.”
Baum continued: “Manufacture production rates are still very low, and with a fair percentage of those aircraft going overseas, there simply are not enough airplanes to replace those being wrecked, economically destroyed or sold out of the country. Couple that with renewed interest in learning to fly and aircraft ownership, it will take a major economic downturn, or some punitive political legislation, to reverse this trend.” For assistance, contact Jeff Baum at 920-261-4567.
Gavin Leake simply stated: “It’s still hot as far as I can tell.” For assistance, contact Gavin Leake at 218-280-2615. 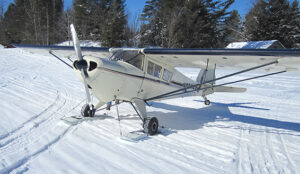 A 1982 F21 Taylorcraft, equipped with wheel penetration “Trick Air Snow Skis.” Photo taken on a lake in the Adirondack Mountains in northeast New York by aircraft owner, Jim Baker of Rochester, New York. Trick Air Skis were invented by Rick and Sandy Discher of Weywauega, Wisconsin, but are now manufactured in Minnesota by Steve Schwister. Trick Air Skis have carbon-fiber strength and an aerodynamic shape that mimics a wing, giving the pilot confidence to take-off and land with ease in the backcountry. Trick Air Skis install quickly, and their wheel-penetration design gives the pilot flexibility to operate on both snow and pavement (https://trickair.com).

Q: You have stated that airplane sales numbers typically drop a little in winter months. With this hot current market, what’s your guess for this winter’s activity?
A: I suspect volume may drop a little as the holidays and taxes sneak up on us, but I don’t see any price decreases unless there are very difficult world events, or a big blast of Covid, major stock market decline, or other unforeseen problem. Let me add a caution for airplane buyers and I hear the same from real estate people: Don’t be tempted to commit to buy something on first sight because you fear it might be sold out from under you. It is better to miss a good deal, than to buy a dud, which could bury you financially.

Q: What kind of skis would you recommend for my Citabria? I generally fly from a paved runway but would like to land on snow-covered frozen lakes and fields.
A: Your best bet would probably be “wheel penetration skis.” There are three versions of skis for light planes: 1) Straight skis, which are only a ski. These offer the best performance (lightest, and less drag) on snow and cost less than other versions, but their drawback is you cannot move the airplane into a hangar, to a gas pump, etc., without some hassle. 2) Wheel penetration skis are probably the most popular for light aircraft. A wheel sticks thru or next to the ski and extends just a bit below the ski. Thus, the wheel is always dragging just a bit through snow, which causes a bit more drag than a straight ski. Sometimes a small wheel will be installed on the rear of the ski, so when operating on a paved area, the ski does not drag. Wheel penetration skis cost more than straight skis, and are heavier, but offer the flexibility that you can move on pavement or snow using only engine power. 3) Retractable skis usually have a hydraulic or electric control to raise and lower the whole ski, so only the ski or tire will make ground contact. This allows a more efficient ski or wheel use, but it is usually heavier than other types of skis, and usually costs more.

Q: How accurate are bluebooks? A friend gets a couple of them and it seems their figures are much lower than current asking prices.
A: Bluebooks report history. Asking prices are not always indicative of selling prices. Two of the most popular bluebooks report every three months, so the amounts shown could reflect sale prices of many months ago. In a rising market, airplane bluebook figures will trail the real world. The same (but opposite) is true if the market drops suddenly. If you look at an average USA light aircraft, it will be about 45 years old. No two are alike in overall condition, hours flown, engine hours, quality of engine overhaul, avionics installed, damage history, paint and interior condition, maintenance records, etc., so value will be different on each airplane.

Q: Now that we have inflation starting in the U.S., aren’t I better off hanging on to my airplane than selling it, until the economy levels off?
A: If you have good use for your airplane, keep it! As for when is it a good time to sell, besides considering current market conditions, you may want to have a talk with your tax preparer to look at the tax ramifications of a profitable sale, and then look closely at your overall financial picture, age, needs in retirement, etc.
If you are not using your airplane enough to justify owning it, then sell it. Idle airplanes depreciate in several ways: 1) An idle engine can begin to rust. 2) Engine overhaul periods, prop overhaul periods, and annual inspections come due based on calendar time, as well as sometimes hours flown. I feel keeping an airplane in storage rather than selling it is usually not a good idea.

Q: An old-timer once told me if I pulled on carb heat on my J-3 Cub just before I reduced power to land, I could kill the engine, and would not know because the prop would continue to turn at glide speed. How could that be?
A: In your Cub, with a small Continental engine, it is possible to have a bit of ice in the carburetor, and you won’t realize it at the time. When you pull on carb heat, some ice could work lose from the throttle plate in your carburetor just as you reduce the power to land. With the throttle plate in the closed or almost closed position, plus some ice present, it is possible to choke off completely the fuel/air mixture your engine needs to continue to fire. Veteran Cub pilots apply carb heat well before power reduction to melt any ice, and you should too!

EDITOR’S NOTE: Pete Schoeninger is a 40-year general aviation veteran, starting out as a line technician as a teenager, advancing through the ranks to become the co-owner and manager of a fixed base operation, and manager of an airport in a major metropolitan community. He welcomes questions and comments via email at PeterSchoeningerLLC@gmail.com.

DISCLAIMER: The information contained in this column is the expressed opinion of the author only, and readers are advised to seek the advice of others, and refer to aircraft owner manuals, manufacturer recommendations, the Federal Aviation Regulations, FAA Aeronautical Information Manual and instructional materials for guidance on aeronautical matters.