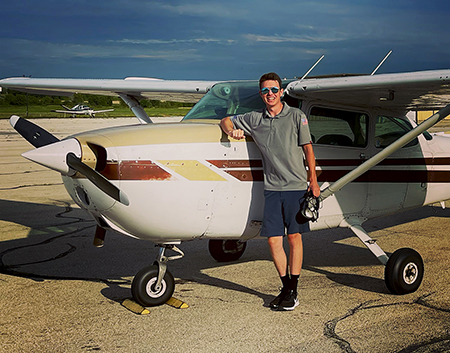 Micah West, 18, of Oconomowoc, Wis., was awarded a “James C. Ray Aviation Scholarship” in the amount of $6,000, thanks to the Ray Foundation and members of EAA Chapter 320 of Watertown, Wisconsin, who nominated him. Micah is seen here following his Private Pilot Checkride with the Cessna 172 he rented at Wisconsin Aviation.

WATERTOWN, WIS. – Micah West, 18, of Oconomowoc, Wis., was awarded a “James C. Ray Aviation Scholarship” in the amount of $6,000.00 following a stringent vetting process. Micah was nominated by EAA Chapter 320 of Watertown, Wisconsin.
The James C. Ray Aviation Scholarship is awarded to qualifying youth ages 16-19 who are seeking their Private Pilot Certificate. Nominations are solicited from EAA Chapters nationwide. Once awarded, the scholarship money is managed by the local EAA Chapter.

In a letter to EAA Chapter 320 President, Eric Wegner, EAA Ray Aviation Scholarship Administrator Chris Gaugert wrote: “Due to your chapter’s dedication to EAA, youth engagement, overall activities, and chapter health, and the wonderful application you submitted, EAA and the Ray Aviation Scholarship Review Committee are excited to have your chapter onboard this year. Congratulations to Chapter 320 for all their efforts in positioning themselves to be awarded this scholarship money!’

Micah West went on to successfully earn his Private Pilot Certificate on July 10, 2021. Since Micah had already soloed and finished the written examination, he received a $6,000 scholarship, as compared with the customary $10,000 he would have received had he not soloed before applying for the scholarship.

The scholarship gave Micah the boost needed to propel him into a career in aviation. Starting in the fall of 2022, Micah will be attending Lewis University in Romeoville, Illinois, within the College of Aviation, Science & Technology. 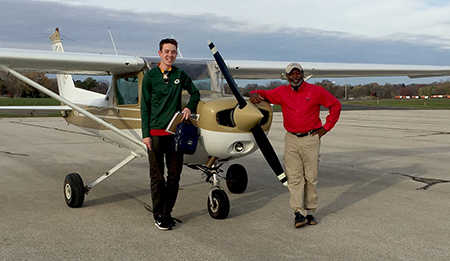 Micah credits his success to the support and encouragement he received from members of EAA Chapter 320, and to his flight instructor, Charles Allen, at Wisconsin Aviation in Watertown.

“Micah is a great young man!” said Wegner. “We could not have asked for a better scholarship recipient or ambassador for the program. Micah is the kid you want your kid to be like. He’s soft spoken, polite, and humble, and always has a smile on his face, and he’s super smart. His flight instructor said that Micah was an absolute natural in the cockpit. He would describe a concept to Micah, or show him a maneuver, and he immediately understood it or nailed the maneuver. He was an absolute joy to teach and work with.”

There’s an interesting backstory here as well, which makes awarding the scholarship to Micah West even more special.

Micah’s father, Adam, switched careers to become a missionary pilot in Africa. Adam also took flying lessons at Wisconsin Aviation, and Micah remembers going to the airport as a youngster to watch him fly. Unfortunately, Adam was killed in an airplane accident while doing his last bush/mountain flying certification flight with the missionary program. Micah was only 6 years old at the time.

Much to his mother’s dismay, Micah has always wanted to be a pilot, just like his dad, so he joined EAA and started attending chapter meetings.

But prior to getting his driver’s license, Micah would have his mom, Carrie, drive him to the meetings, and over time, she started to enjoy going herself and got involved. She is now the chapter’s scholarship administrator, and its events coordinator. “I could not ask for a better person to be on our leadership team,” said Wegner.

When Micah got his Private Pilot Certificate, the first person he took flying was his mom.

Micah started working at Wisconsin Aviation as a line technician in June 2020, just like his dad did, to help pay for flight training.

“Everyone on the field loves Micah, and you know if you ask him to do something, it will be done correctly, promptly, and with a smile,” added Wegner. “Wisconsin Aviation President Jeff Baum says he wished he had 10 more young adults like Micah on his staff!”

The EAA Ray Aviation Scholarship Fund is a scholarship program that is funded by the Ray Foundation, managed by EAA, and administered through the EAA Chapter network. Through the generous support of the Ray Foundation, EAA provides up to $10,000 to deserving youth to cover their flight training expenses, totaling $1,550,000 annually. In addition to the scholarship, recipients receive a Lightspeed Zulu 3 headset once they pass the FAA Private Pilot written exam.

The Ray Foundation was founded by James C. and Joan L. Ray of Naples, Fla. James Ray was born in San Francisco, California on January 1, 1923, with the spirit of a true entrepreneur. As a youngster, he was never idle, and had countless part-time jobs, selling magazines, and delivering groceries and laundry. He was also an Eagle Scout, and upon graduation from high school, he became a steelworker.

Ray’s dedication to aviation began shortly after the December 7, 1941, attack on Pearl Harbor which he witnessed firsthand as a civilian steelworker. Following the attack, he enlisted in the Army Air Corps and was involved in the D-Day invasion as a B-17 command pilot with the 8th Air Force. Post war, he served in the Air National Guard, and was very involved in general aviation.

Ray firmly believed in the life skills, discipline, character, and confidence taught throughout the flight training journey. In keeping with his spirit, the Ray Foundation seeks to encourage the development of human potential through supporting programs that develop life skills, such as self-discipline, self-confidence, and self-reliance on the part of the grant recipients. The foundation has focused on the development of strategies and programs that address the involvement and education of young adults in aviation and aerospace.

The Ray Foundation was first involved in veterinary research in the 1960s. In later years, he focused much of his philanthropy on aviation, supporting the John D. Odegard School of Aerospace Sciences at the University of North Dakota; EAA’s Air Academy in Oshkosh, Wis.; Aircraft Owners and Pilots Association’s youth aviation and pilot safety initiatives; and Sun ‘n Fun Fly-In’s youth aviation education programs. Ray was also instrumental in funding the construction of Central Florida Aerospace Academy in Lakeland, Florida.

Further information about the “James C. Ray Aviation Scholarship” can be found at EAA.ORG/Rayscholarships or by contacting your local EAA Chapter:
https://www.eaa.org/eaa/eaa-chapters/find-an-eaa-chapter.