THE SKY AND I | Midwest Flyer – General Aviation Magazine

THE SKY AND I 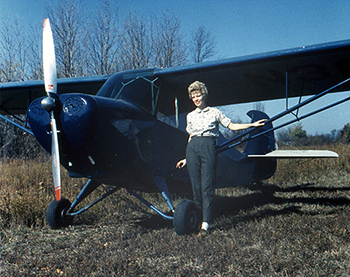 “Be sure your seatbelt is tight. Put your hands and feet on the controls,” Jim hollered from the back seat.

The throttle knob eased forward, taking my left hand with it. I felt the rudder pedals twitch under my feet and the stick move back and forth slightly in my right hand. The engine responded, and the little blue airplane surged forward. Bumping and rattling, the Champ raced over the turf.

Suddenly, the jouncing ceased. We were airborne, skimming the trees at the end of the runway. So, this was flying. It was my first time in an airplane and my first flight lesson.

Never had I imagined I would learn to fly!

Growing up south of Chicago, my parents – Aba and Clifford Holtgren – took my younger sister Lois and me to Midway Airport to meet arriving relatives. That was exciting!

When they departed, we sisters put our thin dimes in the collection box for admission to the observation deck. There we watched as engines were started and the airliner moved slowly toward the runway. We watched it thunder down the runway and climb up into the sky until the silver wings disappeared. Someday, I promised myself, I would be the one departing.

But, never had I thought about becoming a pilot!

As a youth. I remember buying a model kit for a wooden Piper Cub, assembling it, and painting it bright yellow. Airplanes were intriguing, but I felt aviation far removed from me. Little did I know then that future circumstances would make it possible for me to be personally involved in the world of flight.

After Don and I married in 1958, we visited Whidbey Island Naval Air Station where his brother was a pilot. Long conversations centered on flying. Neither of us had ever been up in the air. We listened to his brother tell about learning to land, the satisfaction of that solo flight, and flying to distant cities.

Don and I decided to become part of this aviation world. We joined the flying club at Young Field, near Ann Arbor, Michigan. We took our first lessons on August 29, 1960. Flying in the beautiful blue Aeronca Champion that day was the beginning of my aviation life and also of this book.

Last Part of Chapter One

Why doesn’t he tell me how much back pressure. I didn’t like those dizzying spirals either. They made my head light when coupled with the drone of the engine and the constant bouncing.

“Well, try one to the right. Remember back pressure.”

“Back pressure,” I mumbled. Right stick. Right rudder. Neutralize. Back pressure. Still the Champ circled downward toward a wheat field. I pulled back harder. Getting angry, I thought, why couldn’t he let me fly straight and level? There would be plenty of time to learn turns later.

Jim leveled the plane. I set my lips in a hard, determined line as I banked again to the right. The turn tightened and we lost altitude.

“Watch the altimeter,” Jim advised. “Then you’ll know if you’re losing altitude.” He added power and the plane returned once again to 2000 feet.

Now, where was that altimeter? There it was. The long needle was indicating 2000 feet. I hoped it would stay there the next time I tried a turn.

“I’ll show you one more,” Jim said as he banked the plane, executing a perfect circle. It seemed so easy. Was he showing off?

“Try another turn,” he said.

This time I completed the circle. The altimeter registered 1700 feet. But the turn hadn’t tightened as much as the other ones.

Maybe now he would take over. No such luck. He asked, “Where’s the airport?” From the sound of his voice, there was probably a wide grin on his face. Fortunately, there was a bright orange-backed drive-in screen adjacent to the airport. I pointed. One thing in my favor for the day!

Jim turned the plane toward the airport and, apparently, planned to fly. Now I was free to enjoy being aloft. Below, the fields were divided into squares and gravel roads formed their boundaries. How neat everything looked from this altitude.

Nearing the airport, Jim turned the plane southeast, paralleling the longer runway. Suddenly, the engine seemed to stop, or was it running at reduced power? Jim explained, “We chop power to lose altitude and land. Now, I’ll turn left 90 degrees for base leg.”

His voice seemed louder now that the engine was operating at a lower rpm. The altimeter unwound. Gliding was like going down a slide in slow motion. I yawned to relieve the pressure in my ears from the descent.

The throttle jumped forward as he revved the engine. What now? Reading my thoughts, Jim said, “Just clearing the engine in case we need it.” The engine was idling again. Soon he turned 90 degrees to the left. The runway was ahead. Suddenly, the plane was no longer pointing at the runway, but was cocked at a terrible angle. We were descending sideways, the left wingtip leading us toward the ground. I leaned hard against the right window. Then, the wings were level again.

“Just a slip,” Jim reassured me. “Helps to lose altitude without gaining airspeed by diving. You’ll learn how laer.”

“Much later,” I mumbled.

The little blue Champ skimmed the buildings at the end of the runway. Jim eased back on the stick, and we floated, level with the runway. I waited for the bump. Instead, there was a slight jar as wheels touched turf. Then the rumbling again as the plane rolled, slowing to taxi speed. In front of the office Jim switched the engine off. Instant quiet. He eased himself out of the plane. After unbuckling my seatbelt, I climbed out, slightly unsteadily for my head was buzzing.

Jim told me to buy a logbook in the office. There he methodically entered the details.

“Can you fly again in two days? I have a flight with the airline until then?”

I couldn’t wait to try those turns again.

The car seemed unusually quiet on the drive home. I was tired and felt as if an extraordinary amount of work had been done. But the logbook entry was only 45 minutes.

I put the logbook on the hall table, lay on the couch, and closed my eyes. I envisioned the whirling blur of the propeller and heard the sound of the engine. I was happy knowing that one step had been taken up a long ladder that reached for the sky. 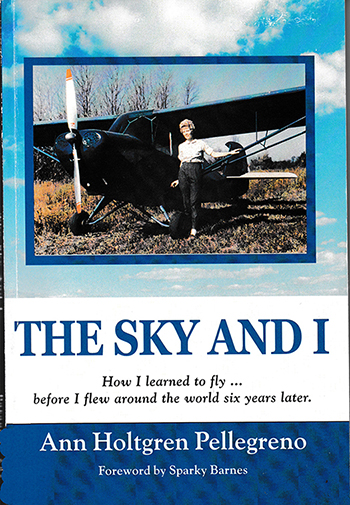 The book “THE SKY AND I”
by ANN HOLTGREN PELLEGRENO
Is available at specialbooks.com for $25.00

EDITOR’S NOTE: Ann Dearing Holtgren Pellegreno is a professional musician, teacher, author, lecturer, and farmer. In 1967, Pellegreno and a crew of three, successfully flew a twin-engine Lockheed 10 Electra, similar to the aircraft flown by Amelia Earhart to complete a world flight that closely mirrored fateful Earhart’s flight plan in 1937.
Flying a twin-engine Lockheed Electra L-10E, Amelia Earhart disappeared over the Pacific Ocean on July 2, 1937, three-fourths of the way on a pioneering attempt at circling the earth’s equator by airplane. Thirty years later, Ann Pellegreno — dubbed “Michigan’s flying housewife” by the wire services — was returning home after four weeks piloting the vintage Lockheed along the same route Earhart had traveled, completing the vanished aviatrix’s legendary unfinished flight.