Perseverance Pays Off For Organizers of Thunder On The Lakeshore! | Midwest Flyer – General Aviation Magazine

Perseverance Pays Off For Organizers of Thunder On The Lakeshore! 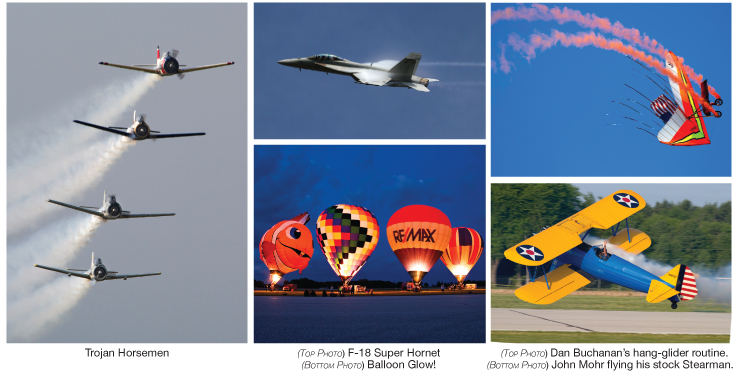 Three days of almost perfect air show weather greeted fans who flocked to Manitowoc County Airport, Manitowoc, Wisconsin, June 5-6, for the 2010 edition of “Thunder On The Lakeshore.” As usual, a great group of civilian and military aviators entertained the crowd. The headliners had to be the Air Force A-10 “Warthog” and Navy F-18 Super Hornet demonstration teams, but the civilian performers were not easily out-done.

Air show performer, Gene Soucy, flew his highly modified Grumman “ShowCat” biplane in three separate acts: first a solo aerobatic performance, then with wingwalker Teresa Stokes, and finally in a brand-new, two-plane extravaganza with John Mohr. Mohr also flew his own aerobatic routine, taking his 220 hp stock Stearman biplane right to the edge of its performance envelope (and maybe a bit beyond).

For the aficionados of aerobatics, “Thunder” had three outstanding performers: Jim “Fang” Maroney tumbled his Super-Chipmunk around the aerobatic box, showing the stick-and-rudder skills that helped him earn the #1 spot in the 1983 Navy “Top Gun” class. Bob Davis demonstrated why the Russian-built Sukhoi Su-29 was the dominant plane in aerobatic competition for many years. Mike Love showed the aerobatic capabilities of another Eastern Bloc aircraft, the Yak-52 trainer, flying his “Yakrobatics” routine.

Fans of the sweet sound of the V-12 Merlin engine and the clean lines of the P-51 Mustang got their fix from Vlado Lenoch. Vlado is one of the original “Heritage Flight” pilots from the U.S. Air Force’s 50th Anniversary celebration in 1997, and one of a select group of civilian pilots allowed to fly formation with current military aircraft. In addition to his smooth individual aerobatic performance with his P-51 Mustang “Moonbeam McSwine,” Lenoch also flew a “Heritage Flight” with the A-10.

Somewhere there is a rule that every air show must have a formation team. This year the T-28 team, the “Trojan Horsemen,” filled that requirement. They are a six-ship team flying to publicize the work of the “Veterans Airlift Command,” a non-profit organization providing free air-transportation to wounded veterans and their families (www.veteransairlift.org).

For “something completely different,” Dan Buchanan flew his hang-glider aerobatic routine. Buchanan is towed aloft by a pickup truck on the runway, and performs an amazing set of aerial maneuvers starting while still attached to the towline, and continuing after being released. His hang-glider is festooned with streamers, smoke generators, and an American flag. He ends his act landing on the grass right in front of the crowd.

Rounding out the civilian side of the show were three privately owned jets. Fowler “Big Dog” Cary brought his beautiful T-33 “Shooting Star” painted in the colors of the U.S. Air Force Thunderbirds. Paul Keppler and Carl Schwerman also brought their T-33s and flew a formation routine.

In addition to the flying acts, there were many airplanes on static display. Two DC-3s were parked on the ramp, along with a Canadian Air Force CT-156 Harvard II trainer, and many other aircraft.  One special visitor was Joe Shepherd’s beautiful 1936 Lockheed 12A “Electra Junior” (Dec 2009/Jan 2010, MidwestFlyer.com). This aircraft was used in the 2009 film “Amelia” starring Hilary Swank and Richard Gere. Working with the plane’s history, the show had an “Amelia Earhart look-alike contest” Saturday morning.

And, somewhere in between flying and the static display, was Steve and Joan Hay’s Ornithopter. An ornithopter is a machine that flys by flapping wings, like a bird – or in Steve and Joan’s case, “tries to fly” is a more apt description. Steve is better known for his meticulous reproduction of early airplane engines (“early,” as in the 1903 Wright Flyer). He indulged his whimsical side by creating the stone-age looking ornithopter, complete with a wing-walking stand for Joan. You may have seen them putting around the grounds at EAA AirVenture-Oshkosh, or you may have seen Steve, Joan, and their contraption in a recent television cell-phone commercial.

In addition to all the fun, there were a few somber moments. The 2010 show was dedicated in memory of one of the founders of “Thunder on the Lakeshore,” Bob Vanover, who passed away in January. Around the airport he was known only as “Crazy Bob,” a nickname earned when he announced before the first air show that he was going to call the Pentagon to get a jet demonstration team. The response was, “You’re crazy, Bob,” and it stuck. His persistence paid off and the show got its first, then its second, and then its third single-ship jet demonstration team, helping to establish the show. In honor of Bob, the “Trojan Horsemen” flew a missing-man formation during Saturday’s show.

The success of the show was doubly important this year. Poor weather for a number of years had expended the “rainy day fund” and the show’s board of directors set a minimum fund-raising level before they would allow planning to proceed.

Luckily, long-time sponsors stepped up. Chairman Curt Drumm reports that everybody he approached said they couldn’t imagine not having the show. That kind of support is really the best indication of how much the event matters to people, and it starts at the grassroots, too.

Last year, even with a morning temperature of 50 degrees, overcast, and winds gusting to 20 knots, there was still a crowd of fans hunkered-down on the flightline under blankets, waiting for the show to start. “Thunder” also has a strong relationship with performers. Many of them are “regulars,” and quite a few have been performing at Manitowoc since the inception of the show 18 years ago. That connection was evidenced this year, as many of the performers held the date open on their calendars, even when it was not clear the show would even happen.

Hopefully the weather this year was the start of a series of great-weather shows in the coming years. In any case, I know where I will be the first weekend in June next year!