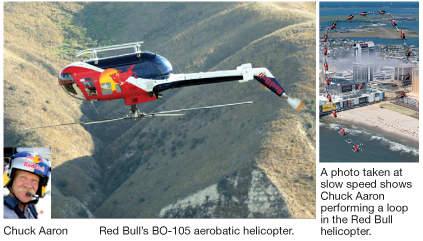 Some TV newscasts have an “Is it real?” segment, where they examine a You Tube video clip of something that appears to be impossible. A helicopter performing aerobatics has been regarded as impossible, but I can tell you first hand that Chuck Aaron, flying Red Bull’s BO-105, does the same aerobatic maneuvers once considered to be the domain of fixed-wing aircraft.

I got to fly with Aaron, who was on hand for the 52nd Annual Chicago Air & Water Show, which attracted two million (2,000,000) spectators.

Helicopter aerobatics has been a topic for discussion, particularly since the 1983 movie “Blue Thunder,” where trick photography showed a futuristic police helicopter perform a loop. Probably every helicopter pilot at the time was asked if this was possible.

In 2004, Chuck Aaron was also one of those who believed that helicopter aerobatics was impossible. That was when Red Bull founder Dietrich Mateschitz, an aviation enthusiast, approached him with the idea. “All I could think is, ‘That’s a good way to die,’” said Aaron. Aaron reconsidered a few weeks later, when he remembered hearing that German test pilots had successfully demonstrated aerobatics in the BO-105.

The crux of the problem is that helicopter rotors are hinged, that was, until MBB (Messerschmitt Boelkow Blohm) designed this one with a titanium one-piece rotor head with four short composite blades that rotate at 430 rpm. The oil and fuel systems are pressurized to keep them working through the flight regime, and other modifications (the particulars are “proprietary”) have been made to make this THE helicopter for aerobatics.

Aaron has been flying since 1973 and has accumulated over 18,000 hours (equivalent to more than two years worth of hours) in some 33 different helicopter models. Strangely enough, he did not get his training in the military. As for his initial experience, “I did a lot of crop dusting,” he said, as well as traffic reporting and banner towing. Aaron has been in charge of NASA’s Space Shuttle Air Rescue Program, and has flown in various movies and TV programs. He helped the Department of Defense develop and test night vision goggles, and has rebuilt three Cobras from leftover military parts.

Aaron is the only helicopter pilot certified for aerobatics. As for his checkride, he said that the FAA had the chief test pilot of Boeing’s Apache program ride along with him as he demonstrated the aerobatic maneuvers.

The aircraft’s G limitations are  -1.0 to +3.1, and for loops, he generally pulls about 2.7Gs. As for entry parameters, there are none. Aaron can start a loop at any airspeed, even standing still. This aspect may not contribute to the “WOW factor” for non-pilots, but for those who have flown aerobatics, this is particularly impressive. With two 425 hp Allison Rolls Royce C-20B turbine engines, the day’s 90-degree heat was not a factor.

In our flight, Aaron demonstrated loops, rolls, Immelmans, a split-S maneuver, a Half Cuban 8, etc., the same aerobatic maneuvers one would perform in fixed-wing aircraft. In this case, however, they are completed within a few hundred feet of altitude, another factor highly impressive to those who have flown aerobatics in fixed-wing aircraft, particularly military jets.

Red Bull actually has two of these BO-105s in the United States, with one for the eastern half and the other for the western. It simply isn’t practical to ferry them around for every air show flown. Aaron commutes from one air show to another with the help of his son and crewmember, Charles Aaron, Jr.

If you get a chance to see this helicopter in action, don’t pass it up. You will see why Chuck Aaron earned the 2009 Art Scholl Showmanship Award.