Wag-Aero… Kinda Like The Old Hardware Store, But For Airplanes 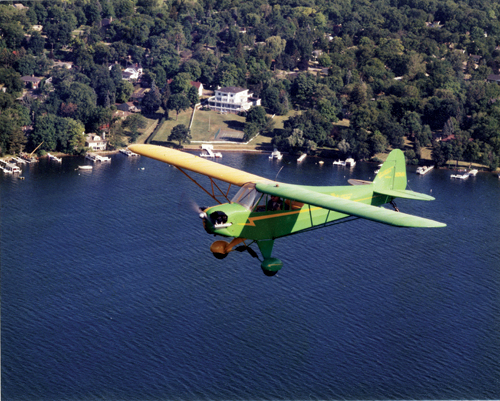 Wag-Aero Sport Trainer over Lake Geneva, not far from its birthplace in Lyons, Wisconsin.

When we bought our 1946 Cessna 140 in 1980, we needed a new tail wheel and springs, and wanted to install air vents in the side windows. Being our first airplane and an antique, we asked fellow aircraft owners where best to get the parts. Without hesitation and as if there was no other choice, our friends said “Wag-Aero” in nearby Lyons, Wisconsin. We called, and they shipped the parts the same day.

Wag-Aero manufactures and distributes more than 10,000 items from complete aircraft kits to seatbelts, engine mounts and bushings, airframe tubing; exhaust systems; gas caps and fuel testers; air filters and replacement elements; oil and oil filters; spark plugs, starters and alternators; brake linings and shock struts; radio antennas; data placards, decals and stencils for lettering and numbering; metal and wood propellers and spinners; a complete selection of aircraft panel instruments; landing lights and bulbs; batteries, battery chargers and jumper cables; wheels and tires; and wheel pants for practically every model of Champ, Grumman, Luscombe, Stearman, Waco, Fairchild, Stinson, Cessna, and Piper aircraft. If you need a wingtip, chances are Wag-Aero has what you are looking for, and if by chance they don’t, they will direct you to where you can find one. If you own a private airstrip, Wag-Aero has marker balls for power lines, runway lights, and windsocks.

Wag-Aero has a great selection of tie-down kits; window heat shields; wheel chocks; emergency locator transmitters (ELTs); a library of engine, service and owner manuals; and tools, such as safety wire twisters to go with the safety wire they also sell. Come to think about it, Wag-Aero is where I bought mine!

Wag-Aero was founded in the early 1960s by Dick and Bobbie Wagner in the basement of their home in Lyons, Wisconsin. Dick was flying for Republic Airlines out of Minneapolis and building the business on the side with Bobbie. As the business grew, Dick did what few airline pilots do midway in their careers and quit flying for the airlines. 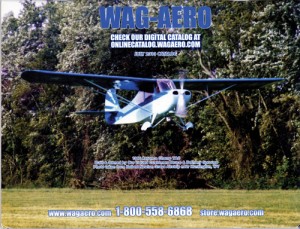 By 1965, Wag-Aero published its first catalog and in 1971, the company moved from Wagner’s basement to its present location. Since then there have been three additions to the original warehouse and manufacturing facility, and an airstrip with two grass runways was built atop the hill behind the buildings for those customers that prefer to fly in.

Today, Wag-Aero has more than 95,000 customers in 47 countries, including the United States, Canada, Western Europe, South Africa, Japan, Korea and Australia. Sales are 67% internet and mail orders, 24% phone orders, and 9% over-the-counter. Wag-Aero publishes and distributes 600,000 copies of their catalog twice each year, as well as four flyers. The entire catalog is also available digitally at onlinecatalog.wagaero.com.

The Wag-Aero catalog is not only informative, but also educational, and makes for some good bedtime reading. You see parts and supplies in their catalog that you may have never considered buying before, but will find useful once you do. Longtime employees Mary Pat Henningfield and Frances McCourt in the marketing department are responsible for creating the catalogs and the flyers.

Wag-Aero’s kit sales are an important part of the business.

Wag-Aero’s first kit aircraft, the “Sport Trainer,” is a replica of the Piper J-3 Cub. Later, the “Wag-A-Bond” and the “Sportsman 2+2” were added. The Sportsman 2+2 was one of the first four-place homebuilt aircraft ever created, which could be purchased in kit form.

Within the Wag-Aero Group of companies is “Aero Fabricators,” which the Wagners established in the mid-1970s. There are three departments within Aero Fabricators: welding, sheet metal fabrication, and seat belt manufacturing.

The welding department remanufactures aircraft mufflers and engine mounts to FAA standards. They also produce many new manufactured aircraft exhaust systems, as well as structural components, such as pre-welded fuselages for Wag-Aero kits.

The seatbelt division manufactures and repairs FAA-approved seat belts and shoulder harnesses in many styles and colors and has been a leader in the industry in designing and manufacturing shoulder harness installation kits. Oftentimes, seatbelts are received on one day, repaired, and then shipped back to the customer the following business day. 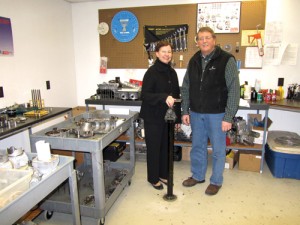 Mary Myers, President of The Wag-Aero Group, with her husband Bill Read, Chairman and CEO, in one of several maintenance shops operated by Aero Fabricators in Lyons, Wisconsin.

The Wagners built a wonderful business, but after 34 very successful years, they wanted to devote the rest of their lives to missionary work and decided to sell Wag-Aero on September 1,1995 to Bill Read and Mary Myers of Milwaukee.

Like the Wagners, Bill Read and Mary Myers come from a general aviation background. Bill is a third generation pilot, and owns a Piper Saratoga. Together, they have been attending EAA AirVenture in Oshkosh, Wis., and Sun ‘n Fun in Lakeland, Florida, for years.

Before purchasing Wag-Aero, Bill and Mary were both bankers in Chicago, then later moved to Wisconsin where Mary was president of Bank One in Mequon, and Bill was the CEO of all Bank One locations in Wisconsin with headquarters in Milwaukee. When the banking industry began to consolidate, Bill and Mary began looking for a business to buy.

To help with the transition, the Wagners remained consultants to Bill and Mary for several years, and Bill continued working full time at Bank One for four more years until going full time with Wag-Aero.

Unlike many new owners that purchase a business, Bill and Mary did not jack up prices to pay for their new acquisition. Instead, they continued the Wag-Aero tradition of supporting the general aviation community with a variety of high-quality products at attractive pricing, and made customer service their top priority. They also looked for additional businesses to buy which would complement the existing line of Wag-Aero products and services.

In April 1997, Wag-Aero acquired the assets of Viking Aero Manufacturing, which expanded Wag-Aero’s product and manufacturing lines to include 23 different types of handheld tow bars.

In October 2002, Wag-Aero acquired the assets of Ground Support Manufacturing, Inc., which further expanded Wag-Aero’s product and manufacturing lines in aircraft and airport-related equipment. These products include a full line of aircraft hand held and tug-type tow bars, jacks, oil and fluid drain pans, engine stands, wheel chocks, work platforms, aircraft winches and a new electric powered tow bar called the “Tow Buddy.” These products are now all manufactured in the Aero Fabricators facility in Lyons, and marketed through the Wag-Aero catalog and website. 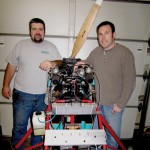 If you own a light sport aircraft, an experimental aircraft, or an ultralight, it may have a ROTAX engine. If so, when it comes to new ROTAX engine sales, repairs, parts, and overhauls, Leading Edge Air Foils, LLC (LEAF) is at your service. Check out their full digital catalog at onlinecatalog.leadingedgeairfoils.com.

LEAF is one of the oldest and largest suppliers of ultralight parts and accessories. Bill Raisner of Peyton, Colo., who passed away in 1999, founded the company in 1975. The company was then sold to Bill Read in August 2000, and the business was moved to Wisconsin.

LEAF is now the central U.S. independent Service Centre for ROTAX aircraft engines and there are 26 independent ROTAX Repair Centres within the Leading Edge Air Foils, LLC territory of 18 states.

LEAF maintains a substantial inventory of ROTAX engines and spare parts in addition to many ultralight parts, including Genuine Quicksilver replacement parts.

Brian Meyerhofer is LEAF’s Engine Service Supervisor. Another key person within the Wag-Aero Group is Tom O’Neill, who heads up the company’s kit building network and technical service support.

A lot of very successful aviation business leaders today got their start at Wag-Aero. Among them include Larry Dawley of Dawley Aviation in nearby Burlington, Wis., which specializes in aircraft exhaust system repairs; Gino Santi of the aircraft parts and supply company Trimcraft Aviation in nearby Genoa City, Wis.; and Carl Hartwig of Eagle Fuel Cells-Etc, Inc. in Eagle River, Wis.

Mary Myers not only has a background in finance and accounting, but since buying Wag-Aero, she has become a DMIR, which stands for Designated Manufacturer Inspection Representative of the FAA, so she can personally inspect parts manufactured by Aero Fabricators. Bill Read is also very good at the finance and accounting end of the business, but has also become an expert at reading aircraft blueprints, and knows every part Aero Fabricators manufactures. Together, the couple knows how to run a business.

“We sell a lot of parts to individuals, but also to repair stations and FBOs,” said Mary Myers.

Dick Wagner used to enjoy buying up inventories of new and used aircraft parts at auctions and making them available to aircraft owners and builders. Today, most parts distributed by Wag-Aero are FAA-approved and traceable due to new regulations. The parts are inventoried on computer, so when inventory gets low, new parts can be purchased or manufactured so they are always in stock and available to customers.

It is the Wag-Aero Group’s goal to limit downtime for aircraft owners, and provide quick turnaround on repairs and overhauls.

For additional information on the Wag-Aero Group, call 1-800-558-6868, email wagaero-sales@wagaero.com, or refer to their websites: www.wagaero.com or www.leadingedgeairfoils.com.

EDITOR’S NOTE: Dick and Bobbie Wagner were inducted into the Wisconsin Aviation Hall of Fame in 2009.

This entry was posted in All Features, Features, Feb/March 2011, Products & Services and tagged aircraft, ROTAX engine, Wag-Aero. Bookmark the permalink.