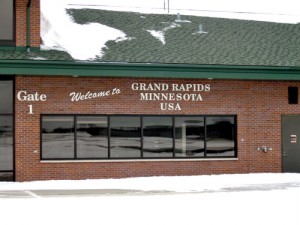 GRAND RAPIDS, MINN. – The Grand Rapids-Itasca County Airport (GPZ) is the host airport for the Minnesota Airports Conference, April 13-15, 2011 at the Sugar Lake Lodge, sponsored by the Minnesota Council of Airports and the Minnesota Department of Transportation, Office of Aeronautics.

The Grand Rapids-Itasca County Airport was created in 1933 when the Village of Grand Rapids, Minnesota purchased the 360-acre “Wheaton” farm just 2 miles southeast of downtown. Shortly after the village obtained the property a grass strip was built and Ted Tinquist, Sr. began serving as the airport manager. Tinquist founded T&F Flying Service, which was soon followed by Tinquist Aviation using a J2 Piper Cub for flight instruction and charter flights. The airport was the recipient of several Works Progress Administration (WPA) grants during the 1930s and by late in that decade, a former one-room school house had been moved to the airport to serve as a ground school classroom. Tinquist and his family lived on the airport until they temporarily moved to Fargo, North Dakota where Tinquist provided flight instruction to military pilots who would eventually fly during World War II.

By 1944, in nearby Coleraine, Minnesota, Gordon “Gordy” Newstrom was also running a flight school, which he began after being discharged from training Naval Air cadets. This flight school had grown to 100 students following the years after World War II. That same year Gordy Newstrom founded Mesaba Airlines taking its name from the American Indian word for “soaring eagle.” Mesaba had one plane, purchased for $1,300, which it used to shuttle employees of the Blandin Paper Company from Grand Rapids, Minn., to the Twin Cities. By 1949, activity at the Coleraine Flight School had slacked off and following a tragic hangar fire Newstrom moved his operation to the Grand Rapids Airport and became the airport manager. The remnants of the Coleraine Airport are still visible today west of Trout Lake and south of U.S. Highway 169 on the present day site of the Trout Lake Golf Course.

After the move to Grand Rapids, operations grew from two Piper Cubs to six aircraft, which included a five-place biplane. In addition to acquiring more airport maintenance equipment, the staff increased from one to four pilots and two mechanics. The early 1950s also saw the beginnings of seaplane operations and flight training on Lily Lake when Newstrom installed plywood floats on one of his Cessna aircraft. 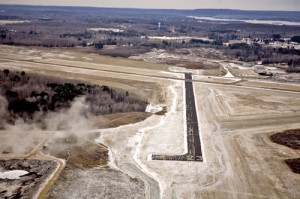 With the increased activity level and local airport demands, the airport needed improvements and modernization. In 1953, the sod runway was paved to 4,100 feet.

Increased airport operations and improvements continued through the years and in 1967, through a joint powers agreement between the City of Grand Rapids and the County of Itasca, an airport commission was created and the airport was renamed from the Grand Rapids Municipal Airport to the Grand Rapids-Itasca County Airport. The Halverson family of Duluth, who bought the Mesaba Airlines portion of Newstom’s FBO business in 1973, began scheduled air service out of the Grand Rapids Airport. By 1974, the airport consisted of the following features: RWY 16/34, 100’ x 4,100’ paved and lighted; RWY 04/22, 150’ x 3,050’ turf; RWY 10/28, 150’ x 2,470’ turf; seaplane operations area with 13 based seaplanes and maintenance facilities; takeoff/landing area approximately 1,800’ in length; apron area, 97,000 square feet; 25,000 gallons of stored avgas; TVOR and rotating beacon; REILS on RWY 34; MIRLS on RWY 16/34; VOR; instrument approaches available through Hibbing Flight Service Station; Civil Air Patrol Building, 2,500 square feet; hangar and shop, 8,000 square feet; hangar and administration building, 12,500 square feet; 10-unit T-hangar; large hangar, 2,000 square feet; and a vehicle parking lot for 50 vehicles.

From 1974 to 1980, there were no significant improvements to airport facilities, but from 1980 to 1991 the airport saw a significant number of improvements including expanding the aircraft parking and tie-down apron to 285,000 square feet, wider taxiways, and more hangars. Additionally, Runway 16/34 was extended to 5,755 feet. Modern snow removal equipment was acquired, as was aircraft rescue and firefighting apparatus.

In 1986, the airport was renamed “Gordy Newstrom Field.” In 1978, Mesaba Airlines was sold to the Swenson family of Thief River Falls, Minn., who made the airline public in 1982. The airline began flying to Iowa, North Dakota and South Dakota, using a fleet of Beech 99s. In 1985, Mesaba Airlines moved its headquarters and maintenance base from Grand Rapids to Minneapolis while maintaining its air service link to Grand Rapids.

Since 1991, the airport has added a passenger terminal building, and two additional t-hangar units for a total of 34 bays. A deer proof perimeter fence was also installed.

Many more capital improvement projects have been completed since 2005. Today, despite the loss of commercial air service, the airport provides a significant economic impact to the region estimated at over $1.5 million per year. There are an estimated 10,000 aircraft operations each year, and nearly 65 aircraft are based at the airport, including several Minnesota Department of Natural Resources aircraft. The airport’s annual budget is approximately $200,000 with over 80% coming from tenant and user fees.

Future capital project plans call for the acquisition of additional property for a non-precision approach to Runway 5/23, and construction for storm water management.