A Seaplane Adventure Over The Rockies 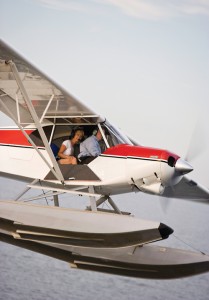 Flying seaplanes is great fun, whether flying a Piper Super Cub, Cessna 206, or de Havilland Beaver. While my usual mount is a Piper Super Cub, I was invited to fly a Cessna 206 amphibian seaplane from South St. Paul, Minnesota to South America this past winter, which made for a trip of a lifetime, filled with many incredible adventures. I will share a few of them with you.

December 16, 2010 started out like most Minnesota winter days, gray with 5,000 foot ceilings and a band of lingering snow showers to the west. The plan was to fly west over the Rockies to capture some videos of Yellowstone National Park, Glacier National Park and the Grand Tetons with our strut mounted camera. But Mother Nature had a different idea for us. We eventually ended up in Santa Monica, California.

Patrick, the owner of the C206, planned to pick up two friends who would accompany us to Panama and on to Argentina, our final destination. With our gear and the weight of our amphibian floats, gross weight was always a consideration, so our plan was to fly with half tanks, so we couldn’t fly more than 3-hour legs. As always, our planned departure got pushed back, and we were finally on our way at 11:00 am. At the end of our first day, we only made it to Aberdeen, South Dakota. 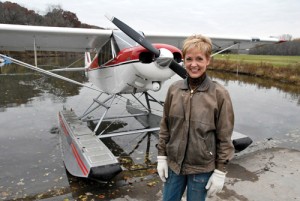 Our weather briefing called for VFR for our trip to Steamboat Springs, Colorado. We did not have to fly far to have our first adventure. We were snowed in at Steamboat Springs for five days. The people and the accommodations were wonderful, but we were anxious to push on to Las Vegas.

The flight along the Colorado River and Monument Valley was spectacular. The air was so clear that every detail of the formations and surrounding scenery could be taken in. Our weather briefing called for VFR with showers in the vicinity all the way to Las Vegas. As we approached Lake Mead, northeast of Las Vegas, we could see that Las Vegas would soon be getting a shower. Lake Mead looked pretty good to two seaplane pilots who had been dealing with nothing but snow since Minnesota. The decision was made to land and wait it out until we could take off and head towards Las Vegas. Once on the water, we decided to taxi toward Las Vegas to enjoy the scenery as we waited for the shower to pass. It was 4:30 pm, and we taxied for about 45 minutes.

Then the rain came. The “shower” turned into a steady rain for 3 hours. At this point we had lost our opportunity to takeoff and fly to Las Vegas. As the rain continued and winter’s night came, we could not see to navigate around the rock islands in the lake. We chose to follow the path we made on the GPS. We knew that was safe and we would not bump into anything. The rain stopped, the stars came out, and we set anchor to spend the night on Lake Mead. It was a very cold night. I dug through my suitcase and put on everything warm I could find. It was about 35 degrees.

We were startled out of our fretful sleep by the sound of a dark colored sea bird landing, walking and slipping on the wing. He was big, with a wingspan of at least 5 feet. We were wide-awake now, both tired after a long, cold night. The sun was coming up and we were ready to pull up the anchor and head for Las Vegas. When Patrick turned the key to start the engine…nothing! No, we did not leave the master switch on overnight.

I tried to hand prop it, but to no avail. Patrick was successful and we were able to make an uneventful takeoff from Lake Mead.

Five miles out from Las Vegas, the radios failed. We could not transmit, but we were able to receive. The skillful controller cleared us to land and we thought we were home free. We were not. On landing, the right front tire blew. Talk about exciting and we hadn’t even crossed the border.

I’m sure we were quite a sight as we checked into all the glamour of the MGM Grand Hotel. No one said anything unkind about these two scruffy-looking pilots. They just looked at us kind of funny.

After Christmas at Patrick’s friends’ home, the real journey began. Departing from Santa Monica, we flew the VFR corridors through LAX class Bravo, crossed the border and headed down the Baja Peninsula. The topography was incredible and ever changing. The sands of the desert shoreline rolled continually into the ocean. The winds magically swirled the white sands of Scammon’s Lagoon into incredible shapes that looked like the frosting on a cake or the meringue on a lemon pie. The sand changed as the terrain started to rise. There were mini Grand Canyons everywhere that soon grew into rolling hills and soft mountaintops that were covered with lush greenery. It made me want to touch it with my finger.

The lush vegetation began to disappear as the mountaintops turned into rugged mountain peaks. Mindful of our fuel, we descended into Loreto and spent the night. The next morning we departed for La Paz. We flew the Sea of Cortez at 100 feet above the water. Incredible!! Jacques Cousteau called it the “aquarium of the world.” The beauty of the shoreline, water and sky were all at our wing tip. This was a day to be remembered.

EDITOR’S NOTE: Mary Alverson is President of the Minnesota Seaplane Pilots Association, and owns, flys and instructs in her Piper Super Cub on floats. She is also a flight attendant with Delta Airlines.

The Minnesota Seaplane Pilots Safety Seminar & Fly-In will be held May 6-8, 2011 at Madden’s Resort on Gull Lake in Brainerd, Minnesota.