True story of how to create an aviation business, backwards. 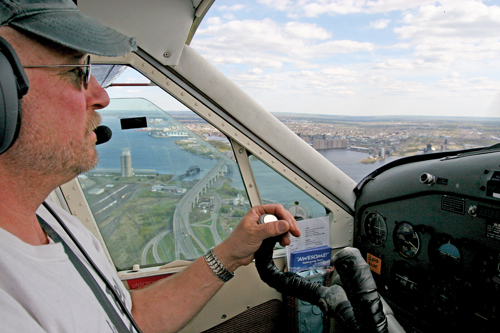 How do you start a successful aviation sightseeing business?

According to John Justad, owner of Lake Country Air Service in Hackensack, Minnesota, it just kind of happens.

John never intended to own an airplane tour business. He was not one of those kids who dreamed of flying. He didn’t even start flying lessons until he was 35, and it took him three years to finish them. It was another seven years before he got his medical and Private Pilot Certificate.

During a rough time in his life, with marital, financial and medical problems, John found the airport in Hackensack for sale at a bargain basement price. It had been abandoned for more than a decade and required extensive work. But with time on his hands, the 2,000 x 40 foot paved runway was soon cleared and John had a tiny home in what was the office. In the subsequent years with the help of his father, that facility became a showcase for hangar living with three upper level decks, four bedrooms, a study, a sensational living room, two kitchens and four bathrooms, all uniquely decorated by John’s partner, Kris. All the rooms have windows to the outside. An interior hallway connecting the rooms overlooks the hangar.

John’s birth year is 1957 and his lucky numbers are 1 -3 -5 -7. He just thinks they are a cool sequence of numbers. When he saw a magazine photo in 2001 of a 1957 de Havilland Beaver on floats with the tail number N31357, he clipped it out and hung it on his refrigerator, saying that plane would someday be his. Through an extraordinary series of events, the premonition came true.

A couple of years after clipping that magazine photo, John was at a hangar Christmas party and spotted the Beaver in the hangar next door. Naturally, he struck up a casual friendship with the owner. When the plane went up for sale in 2005, John was not in a position to spend hundreds of thousands of dollars to buy it, nor did he even have a seaplane rating. But he thought about it, nonetheless. Three days later, he proposed a creative financing plan to the owner but was rejected. Several months later, with no strong buyers in sight, the owner was ready to deal. John came up with a down payment by refinancing the airport and worked with the owner for the balance.

The owner kept the plane at his hangar and shared flights with John during the summer of 2006. In 2007, John went to Florida for training. He flew 60 hours in a Cessna 172 and J3 Cub on floats, and got his seaplane rating. That summer, he flew the Beaver to Oshkosh, Wisconsin for EAA AirVenture. By the end of the year, he had accumulated a little more than 100 hours and decided to start a flying business.

Of course, true to form, John had other hurdles to clear before his vision materialized. He learned that he needed a Letter of Authorization from the FAA Flight Standards District Office in order to give rides. In order to get the Letter of Authorization, the pilot flying needed to have a Commercial Pilot Certificate. He also learned that his business needed to have a drug policy and drug testing of its pilots and mechanics. Developing the policy and testing wasn’t difficult, but John didn’t have a Commercial Pilot Certificate. While he worked on the certificate, a retired State Patrol friend became the pilot of record and the business was established. 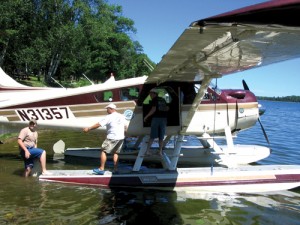 In June 2008, John hung out his shingle and started selling rides. He had 60 hours in the Beaver when he got his first gig at Paul Bunyan Days in Akeley, Minnesota. Following that, he hopped from resort to resort in “lake country,” offering rides to guests at $50 a pop. By the end of the summer, he had formed relationships with six resorts and had flown 800 passengers.

“People are gushy about the [flying] experience. It is really rewarding,” John said. His clients asked him about souvenirs. He contacted a graphic design artist who came up with his logo and now popular “I rode the Beaver” T-shirt. When there is snickering about the slogan, John likes to remind people that a beaver is a strong, hard-working animal of the northern lake country. He expected to give a lot of his “silly shirts” to his buddies and was surprised that he sold out his first 100 within 10 days. To date, he has sold well over 500 T-shirts.

John is still stumbling across opportunities that move him forward. His primary business, what sustains him outside the summer heydays, is theatrical installations. That business has grown to the point where John hired a full-time bookkeeper. Rather than require her to spend all day at his empty hangar, he sought a place in town for her desk and files. For what he expected to pay for office space, he found a small corner store in Hackensack where the bookkeeper could have a private office, but there was also space that could be used to sell souvenirs and promote the flying business. Voila! – a tiny storefront for Lake Country Air Service, with full-time staff.

His luck isn’t ending there, either. During conversations with the mayor of the small town last summer, he learned that the municipal lakeside docks would be replaced and the old ones discarded. John didn’t have a dock for his Beaver, but he does now.

It is not a formula that would work for everyone. Buy an airport, buy a plane, get your certificate and rating, then develop a business plan and hope it works. For John, it did.

While interviewing John Justad at his home, a pickup truck sped down the dead-end runway, the driver clearly thinking it was a road. He realized his mistake somewhere shy of 2,000 feet and turned around. On the inevitable return trip past the hangar, John talked to the driver, showed him around the hangar home and gave him his phone number. The man was staying at a nearby resort. He called John less than an hour later and had five friends who wanted a ride in the Beaver that morning.

EDITOR’S NOTE: Karen Workman is an instrument rated private pilot living in Minnesota with her husband who is also a pilot.

Share and Enjoy:
This entry was posted in All Features, Features, March/April 2012 and tagged Beaver, John Justad, Karen Workman, Seaplane. Bookmark the permalink.