Flying In The Canadian Arctic… Leave The Junk & Bring Home The Memories! 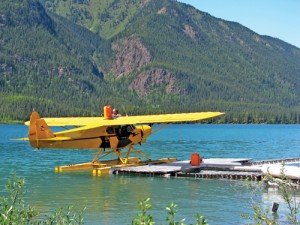 If you are looking for a great flying adventure, head for Canada on wheels or floats!

I fly a yellow and black 1999 Cub Crafters Super Cub; my friend, Wolfgang Greiner, flys a red and white 1998 Husky. Both planes are on Wipline amphibious floats. Both planes have 180 hp engines.

Wolfgang and I have been friends since college. We were both members of the Theta Chi fraternity at the University of Minnesota in the mid 1970s. We both dreamed of flying then and have been lucky enough to be pilots and regular traveling companions for many years.

One day we were dreaming and decided we needed to cross the Arctic Circle. We have since made multiple trips into the Canadian Arctic. The first in 2006, due north out of Minnesota through Red Lake, Thompson, Churchill, then continuing north along Hudson Bay to Baker Lake; then we followed the Back River north to the Chantry Inlet on the Arctic Ocean.

The next year we decided to do Alaska! We flew north out of Minnesota, into southern Canada, then turned west to find the Alaskan Highway. We followed the Alaskan Highway all the way to Fairbanks; turned south through Denali Park to Anchorage; across Prince William Sound into Valdez; from there, we flew south along the coast into Juno. Finally, turning east back into Canada. We flew a northern route to Yellow Knife and Great Slave Lake. We then turned south again flying through several Indian villages and remote lakes and home again.

Two years later in early July of 2009, we decided we needed to see eastern Canada, flying along the Great Lakes, then turning north to the northern most portion of Quebec. Icebergs in the Hudson Straights convinced us to avoid the 100-mile open water crossing to Baffin Island. We turned south flying the entire length of the St. Lawrence Seaway and the northern side of the Great Lakes on our way back to Minnesota.

So having flown these trips and several more into Canada, I offer the following suggestions:

Crossing the border, it is simply not a big deal. The government computer system is cumbersome and works like most things the government produces. It takes twice as long to use the first time than it should. But it works! The border crossing reservation is simply to allow the Customs agent and you to arrive at the same dock at about the same time. Canadian Customs is normally warm and friendly, they understand you are a customer coming to spend money, and they treat you like one. U.S. Customs on the other hand treats you like you are a visiting terrorist. The experience may be similar to the Transportation Security Administration (TSA) experience you have when flying on the airlines.

Gas is available and expensive. When we went to Alaska during the big gas price run-up in 2007, we paid an outrageous price for 100LL. It was $2.75 at home and over $5.00 in the north. Now looking back on it, it was not that bad of a deal. At that same time we paid as much as $750.00 – CASH ONLY – for a rusty 45-gallon barrel of 100LL in a remote Inuit Village that only receives a supply shipment once a year. Otherwise, everything they have is delivered by air.

Call in advance! Everyone has a satellite telephone they will answer and tell you if they have gas. Make sure you ask if they will sell it. The remote villages get a limited supply and will not appreciate you showing up and expecting them to provide you with gas simply because the directory states they sell it.

Bring a bung wrench for opening fuel barrels and a plastic pump designed to fit the barrels. You will also need a few gas cans so you have something to transfer gas in.

Don’t wait to do this trip! Gas is expensive now, and will be more expensive in the future. These experiences will stay with you the rest of your life. Make the trip while you have good health and desire for adventure. These memories will last much longer than any of the junk you are filling your house with.

If you cannot get 100LL, you may have to resort to using auto gas, providing your aircraft has the proper STC. I have an STC to use auto gas for my 180 hp engine. There is nothing to this STC other than a piece of paper. Auto gas will run fine if that is all you can get.

Half the fun of these trips is in the planning. The person who makes the most phone calls and gets to know people before he departs, gets the most out of the trip.

Lodging? Don’t worry about that. Take a tent, three changes of cloths, enough food for three days and don’t be surprised if you don’t use all the food. We carry about a dozen meal replacement bars from GNC, in addition to our three-day ration. We found small places to eat where we bought fuel and resorts to stay in along the way. You can even freeload in a trapper’s cabin. In the current economy, any remote resort you find will have extra beds and cut you a good deal if you simply drop in. It’s not a big deal. Just find a nice beach and stay there.

Now take all the gear you think you will need, lay it out on the floor of the hangar, look it over, then put half of it away again. Now look at what’s left. Pack half of that and leave the rest on the hangar floor. Everyone brings way more stuff than they need. Cash and gas are king on these trips.

A Garmin 496 or a similar GPS with terrain and weather is essential equipment when flying in the wilderness.

Go to REI and buy bear spray. Wear it on your hip like a side arm. It must say bear spray on the container to get it past Customs. Bring a shotgun and a variety of shells, bird shot, BBs, and slugs; about a dozen in all is fine. You will never use them anyway. Canada requires you to fill out a form and pay a tax to bring a shotgun in. No handguns allowed. Rent a satellite telephone and bring it along. Buy the Spot GPS position transmitter and use it along the way to let friends and family know where you are. Get a fishing vest to put your first aid supplies in, the Spot, and a few of the meal replacement bars in the pocket, along with a handheld compass, and a torch cigar lighter. Wear the vest and an inflatable life jacket at all times. Last of all, a Garmin 496 or something similar with terrain and weather is a must. You may not always be able to get the weather, but the terrain feature will keep you alive when you fly into localized fog and find you need to make a turn to stay away from the rocks.

If you don’t have a seaplane or wish to go with an experienced guide to the Arctic, or on a lower Canada fishing trip, contact Brian and Lori at www.adventureseaplanes.com. You will fly as pilot-in-command in a floatplane the entire trip with an instructor as the copilot. You might even choose to get your seaplane rating along the way.

Or call Dave Weiman at Midwest Flyer Magazine (608-835-7063). He organizes a wheel trip to a Canadian fishing lodge north of Thunder Bay each year. This is a first-class lodge, and Dave assists with the preparations, so it is essentially hassle-free, and you won’t have to camp out or worry about where you will get your next gallon of gas.