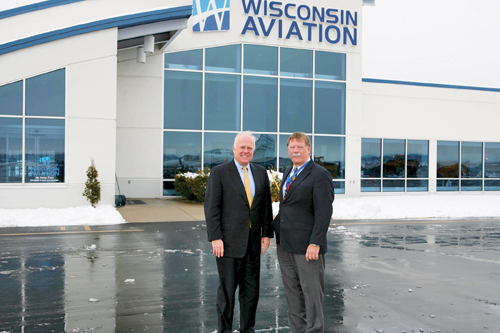 NATA’s president since 1994, Coyne has visited close to 1,000 FBOs and aviation service businesses across the country. He also regularly presents the viewpoint of the industry before congressional committees, the Federal Aviation Administration, Transportation Security Administration, and other federal agencies. The former U.S. Congressman works closely with NATA members across the country, as well as with the other aviation associations in Washington. In recent years, he has worked to develop strong relationships with pro-business, and pro-aviation governors and state legislators. Local aviation issues are equally important, he feels.

Jim Coyne serves on an airport commission and regularly helps airport managers and commissioners understand the importance of the businesses on their airports, and general aviation users and tenants. His efforts have led to the creation of aviation advocacy groups at airports across the country.

Coyne urged tenants and management to write to Representative Tom Petri (R-Wisconsin), who is chairman of the Aviation Sub-Committee, and urge him to do whatever he can to stimulate flight training, help encourage businesses to use air transportation, and protect and maintain our airports.

Coyne was just in Duluth, Minnesota the day prior where he met with Dale Klapmeier of Cirrus Aircraft Design. Klapmeier told Coyne that the Chinese, which has offered to buy Cirrus, is committed to staying in Duluth, and sees general aviation expanding in China. Coyne said that there are presently only 50 private aircraft owners in China, and the Chinese government expects this number to grow to 100,000 in the next 10 years. “But regulations have to change in China, first,” said Coyne.

Commenting on the 70-80 percent student pilot dropout rate presently in the United States, Coyne feels that it is attributed to a combination of lack of time and commitment on the part of the student, and cost and competition with other activities. “Flying was once a career path to the airlines, and that’s not there now,” said Coyne.

Coyne noted the 1960-like training experience many flight schools still have, and the lack of enthusiasm on the part of fixed base operators, are contributing factors.

“We need a club social setting to create and retain interest in flying,” said Coyne, who related the importance of flying clubs to aviation as motorcycle clubs are to Harley-Davidson USA. “We also need flying destinations and maps and courtesy cars when pilots get somewhere,” said Coyne.

Commenting on the future of 100LL, Coyne feels there needs to be more research and an alternate fuel before the Environmental Protection Agency (EPA) will ban it. “We need a drop in replacement fuel, not a third fuel,” said Coyne. “And we need an economically viable alternative fuel, and it will be a long time before we get it.”

Coyne believes that the rules the Transportation Security Administration (TSA) came out for general aviation were “insane,” and is pleased that the rules are being revised. The new large aircraft security rule will be coming out later this year and will be more reasonable.

Concerning Light Sport Aircraft, Coyne does not believe they have a serious future, “and I am sad to say this…I wished they did.” He noted that LSAs have had a lot of hype, but they are too limiting and won’t meet the industry’s expectations. Grant Goetsch of Wisconsin Aviation, Inc., said that he believes that LSAs and the Sport Pilot Certificate has opened the door to aviation for many people who would not have otherwise entered, because of less flight training requirements.

As a member of his airport commission in Martha’s Vineyard in Virginia, Coyne is concerned with regulations that waste money. He sighted a $6 million airport development project at his airport to move 300 feet from one end of the runway to the other end. “You’d think that if they needed to extend the runway on one end, they would have left the original 300 feet on the other end, but they didn’t,” said Coyne. “They cut it off!”

As for the modernization of the air traffic control system, Coyne said, “Rather than call it ‘NextGen,’ they should call it ‘WhichGen?’” because the project has taken so long. He questions the benefits of NextGen for general aviation, and expects it will be a long time before general aviation sees any benefits. “Airspace congestion is mythology, and only concerns seven or eight areas of the country,” said Coyne.

From Wisconsin, Coyne flew to Illinois to meet with fixed base operators there before flying back to Washington, D.C.