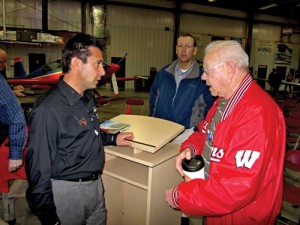 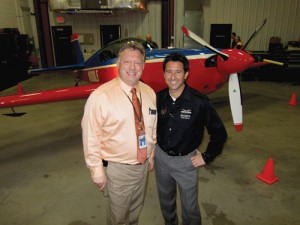 MADISON, WIS. – Air show performer and pilot for the Red Bull Air Races, Michael Goulian, urged a group of 80 fellow general aviation pilots, March 21, 2011, to learn from his example. Like all pilots, Goulian has at times become complacent and told pilots that this complacency can get them into trouble!

Goulian who is a CFII and ATP certificated pilot, and qualified in everything from an Extra 330SC to Lear Jets, spoke at a pilot safety seminar at Wisconsin Aviation, Inc. (www.WisconsinAviation.com) in Madison, Wisconsin.

Goulian described arriving in England late for a Red Bull Air Race due to commitments at EAA AirVenture in Oshkosh, Wisconsin, and failed to acclimate to the time zone change. As a result, he was tired and accidentally hit one of the inflatable pylons during the race, nearly causing him to crash into the river where the races were being held.

Trying to rush while taxiing can also cause an accident. He showed video footage of a fellow Red Bull pilot taxiing his Edge 540, and nearly running into the tail of a Cessna. The pilot immediately stepped on the brakes of the taildragger and nosed over, damaging his propeller.

Goulian also said pilots need to listen to warning signs and to know their limits. For instance, if the plane is not performing as usual, that could be a warning sign and needs to be checked out right away, and not put off to another day.

Goulian said that “checklists” are not only for professional pilots, and even if a pilot has memorized his checklist, he should verify checklist items on an actual checklist especially when preparing for an instrument approach.

Ignorance, too, is a big problem, said Goulian. Many pilots simply do not understand the risks, and they are over-reliant on equipment/technology. Other pilots are just careless and reckless and have no respect for safety. “There are no old bold pilots,” he reminded the group.

Goulian will fly at night in a single-engine airplane, but when he does, he flys between airports, and not across unknown terrain.

He warned pilots never to fly beyond their limits, or those of their airplane, and that “perfection” in one’s flying is the goal!

During a question and answer period, Goulian explained that after more than 6 years, the Red Bull Air Race series was cancelled because of concern over safety. Goulian believes that the “culture” of the races may have been getting out of control. He expects the race to return, however, after a cooling off and regrouping period.

In 1995, Goulian reached the pinnacle of American aerobatics by becoming the U.S. National Champion in the Unlimited Category. Not one to rest on his laurels, Goulian has been a member of the 1994, 1996 and 1998 U.S. Aerobatic Teams, and competed in the World Aerobatic Championships. He is the recipient of both the Art Scholl and Bill Barber Awards For Showmanship for excellence as an air show entertainer.

In addition to being an air racer and air show performer, Goulian is President of Executive Flyers Aviation (EFA), a large flight training center in New England with locations in Bedford and Lawrence, Massachusetts (www.executiveflyers.com). EFA was founded by Goulian’s parents, Myron ad Rita Goulian, in 1964.

Goulian is married to Karin and they have one daughter.

Sony is one of Goulian’s corporate sponsors, and he was in Madison doing a video to promote the company’s line of creative software. Goulian’s entire presentation was also video taped (www.mikegoulian.com).