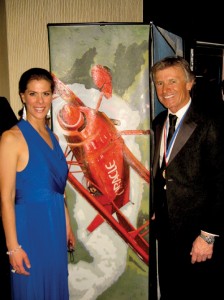 Michelle Rouch with the painting she did of Sean D. Tucker’s plane.

Seven years and one month after the Wright Brothers made their first flight, Eugene B. Ely, racecar driver, chauffeur, car salesman and self-taught pilot, made naval aviation history by being the first pilot to land an airplane on the deck of a naval ship.  The date was January 18, 1911, the aircraft was a Curtiss Pusher, and the ship was the SS Pennsylvania in San Francisco Bay. It was also the first flight using a tail hook system, which was designed by a circus performer.

This historical event will be depicted on an oil painting, which self-taught, aviation artist, Michelle Rouch, donated to this year’s EAA Gathering of Eagles banquet, which annually auctions off special aviation-related distinctive items raising funds for the Young Eagles program.

The theme of this year’s Gathering of Eagles fundraiser held during EAA AirVenture in July in Oshkosh, Wis., was the Centennial of Naval Aviation. Not only was Rouch challenged with finding an appropriate subject for her donated artwork, but also in keeping with “Made In USA” products. All the materials used, including the paint and frame, are made in America! 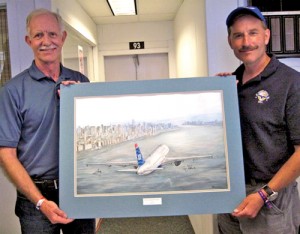 Last year, Tucson-based Rouch donated “We’re Going Into The Hudson,” a watercolor showing U.S. Airways Flight 1549, piloted by Capt. Chesley “Sully” Sullenberger and First Officer Jeff Skiles, making the miraculous landing in the Hudson River with the New York skyline in the background. Both Sullenberger and Skiles had chosen their favorite sketch from those she had submitted.

“My art projects take the same approach. First, I have to see the feasibility of the total cost, and then I have to measure how long the piece of work will take and if I can fit the work into my life. I am a full-time mom and engineer, leaving very little room to create art. After cost and schedule constraints are reasonably thought out, I then create a rapid prototype and explore every possible scenario before I execute the painting. Rapid prototyping is an essential piece because it brings the final painting to a well thought plan. Once I have the artwork sketched in pencil, I request an inspection from my quality manager – my husband – to ensure that all angles are correctly defined. My husband, an engineer, has a critical eye and can detect the slightest imperfections. We make a great team!”

Rouch bought a die cast model of the Airbus 320 and her husband bought a flight simulator to fly the same aircraft and follow the same route as Flight 1549. Her goal was to capture that day. She checked the weather conditions. She consulted with a pilot friend who advised her on the angle of the fairings and the auxiliary engine.

Rouch’s husband, Fotios, is also her resource librarian. Not only is Fotios an engineer with artistic skills, he builds one-of-a-kind resin limited edition airplane models. Several years ago Fotios encouraged Michelle to paint an airplane. She had done many portraits and a series of Greek Orthodox architectural buildings.

“Mathematically, if you add a portrait and a building, you can draw an airplane,” stated Rouch. “The smoothness of a face and the perspective of a building allowed me to quickly grasp aviation art.”

With her husband’s support and his interest in airplane models, Michelle was able to land her first commissioned work – a painting of a C-2 Greyhound – that was published on box tops for airplane models.

Today, Rouch has paintings hanging in many permanent displays including the Mighty Eighth Air Force Museum in Savannah, Georgia, the USS Hornet Museum in San Francisco, and at Tucson International Airport.

Michelle’s studio is located in her garage and one can usually find her there at night after her son and husband have gone to bed.

For more information about artist Michelle Rouch, a member of the American Society of Aviation Artists (ASAA), and the American Institute of Aeronautics and Astronautics (AIAA), check out her website: www.rouch.com