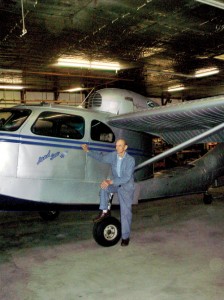 DULUTH, MINN. – When you look at an aeronautical chart and see three airports within close proximity to one another along a border between two states, one may conclude that they are a result of wasteful government spending. But that’s not necessarily the case in the Duluth, Minnesota/Superior, Wisconsin area. Rather, there are three airports serving three distinct purposes: Duluth International serving the airlines and Air National Guard, as well as Cirrus Design; Richard I. Bong Airport in Superior, Wisconsin, serving general aviation; and Duluth-Sky Harbor Airport, Minnesota’s premier seaplane base, which also has a runway.

Along with the floatplane dock, Sky Harbor has a seaplane ramp for easy transition to and from the water for amphibious and straight float aircraft. The concrete ramp is covered with non-abrasive strips so that floats will not receive damage and allow the plane to pull right up onto it. Once the floatplane is up on the float ramp and shut down, Sky Harbor offers a hydraulic floatplane trailer that is attached and operated from a John Deere tractor. This allows the aircraft to be pulled up and out of the water and placed in a hangar or a paved tie-down spot.

Duluth-Sky Harbor Airport is home to about 30 based aircraft with about half being seaplanes. Of all the seaplanes based there, there is only one amphibious aircraft (floats with retractable wheels). Most of the remaining seaplanes based there will transfer between floats, wheels, or skis depending on the season and all come out of the water after every operation. Many transient straight float aircraft come to Sky Harbor for float changes every year. Jonathan Aero, an aircraft maintenance business at Sky Harbor, does most of the float changes, and other aircraft maintenance. While many of the aircraft owners will switch between wheels and floats, there are some that keep their aircraft on straight floats and rely on Sky Harbor’s seaplane base.

Along with Jonathan Aero, there are other aviation-based businesses that operate out of and depend on Duluth-Sky Harbor Airport.

Hangar 10 Aero is a Poly-fiber Aircraft Coating distributor and a Rans aircraft dealer.

Hatz Bantam Light Sport Biplane has plans and parts for its aircraft.

While Lake Country Air Service will spend most of the summer season in Hackensack, Minnesota, the company will also operate in early spring and late fall out of Sky Harbor.

There is a private group that operates and bases two straight-float Beech 18s out of Sky Harbor. Twenty-two weeks a year they fly up to Canada and purchase many of their supplies in Duluth and all of their fuel at Sky Harbor.

Lake Superior Helicopters also operates out of Sky Harbor with their sightseeing tours of the Duluth area during the spring, summer, and fall seasons. Many people who come down to Park Point take advantage of this unique opportunity to see the northland from the air.

Sky Harbor is a point of entry to and from Canada and offers customs at the airport. Sky Harbor’s location next to the sea port is convenient for customs to come down and meet the aircraft. The majority of the aircraft flying internationally in and out of Sky Harbor are seaplanes and would not be able to use Superior’s Bong Field to the south.

Local pilots Jack Brockway and William Neukom started Sky Harbor in 1939 because they wanted a convenient location in Duluth to operate their floatplanes. In 1960, the individual who operated the airport passed away and the airport was abandoned. Fortunately, some prominent businessmen who were pilots convinced Don Macor, the airport manager and a mechanic and flight instructor at the Superior airport at the time, to manage Sky Harbor and he brought the airport back to life.

The City of Duluth took over the airport in 1963 and a couple of Twin Cities flight instructors started a new flight school called “Sky Harbor Aviation.” Macor recalled that the new flight school bought three new Piper Cherokees and business was very good. Macor then moved back to the Superior airport and once again managed the airport until 1969, and eventually moved back to Sky Harbor. Macor still has a hangar and several aircraft at Sky Harbor, including a “Seabee” (he has been flying Seabees since 1960). Macor, 82, is now officially retired, but still enjoys doing a little “fabric work” from time to time.

Macor soloed in a J-3 Cub in 1952 in Superior, and bought a Cub for $400. He completed his Private in 1953 at Minneapolis-Crystal Airport while employed at North Central Airlines as a mechanic working on DC-3s. He completed his Commercial Pilot Certificate and Instrument Rating on the GI Bill in 1954-55 and became a first officer for North Central Airlines flying DC-3s until moving back to Duluth.

Sky Harbor was just a seaplane base until a sod runway was constructed in 1954 and paved in 1963. It wasn’t until 1985 that a parallel taxiway was constructed due to heavier traffic. Today, Sky Harbor has a 3050-foot paved runway (14/32) and two water runways (13/31, 9/27). Sky Harbor offers amenities such as paved tie-down spots for daily and monthly parking, towing for seaplanes in and out of the water, assisted service 100 low-lead fuel, 24-hour access to the general aviation building for the weather computer and restrooms, and much more.

Duluth-Sky Harbor Airport had an economic impact of $1,648,117 and 33.81 jobs countywide in 2009 (University of Minnesota Economic Impact calculator for Minnesota airports).

Sky Harbor is also home to the Duluth Aviation Institute (http://www.duluthaviationinstitute.org). The airport also opens its doors to the community for such events as the Park Point 5K run in July. Sky Harbor has also been host to fly-ins in the

past, such as one sponsored by Lake Superior College. A couple years ago Sky Harbor was host to a Cessna 180 fly-in. On August 19-21, 2011, Sky Harbor will again be host to the Sea Wind fly-in.

In conclusion, Duluth-Sky Harbor Airport has a long and rich history that offers a unique location for both land and sea operations. It is also home to many aircraft owners and businesses that rely on the airport for its close proximity to downtown Duluth.