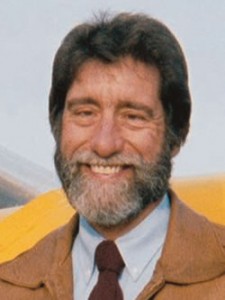 For longtime Lycoming and Continental aircraft engine flyers like me, one of the most surprising stories to come out of the Sport Pilot/Light Sport Aircraft movement is the dominance of Rotax engines in factory-built Special Light Sport Aircraft (S-LSA). By all accounts, this remarkable family of powerplants has cornered about 80% of the market, with Continental a distant second, Jabiru even further back in third, and all other makes hardly registering on the scale. Given this reality, expect to fly a Rotax sometime soon, if you are not already doing so now.

Of course you know, but for those who might not, “Rotax” comes from “rotary axle,” the product that launched the company in 1920. The aircraft engine division began operations in 1973.

Modern aircraft engines are quite different from their 60-year-old progenitors still powering most of the light aircraft fleet, and this is especially true of the 912ULS 100-hp Rotax engines found in most S-LSA. Understanding these differences, and the differing operating and maintenance practices that result, is critical to obtaining safe, economical and satisfactory performance of Rotax-powered aircraft. Fear of the unknown, or preference for the tried-and-true, is a poor reason not to enjoy the benefits of the advances in the last half-century of aircraft engine design. 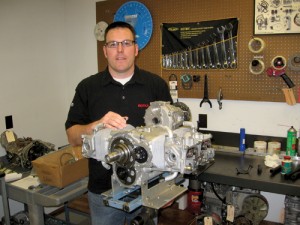 Brian Meyerhofer, Engine Services Supervisor, Leading Edge Airfoils, part of the Wag-Aero Group, Lyons, Wisconsin, has a lot to say about how Rotax 912 series aircraft engines should be operated and maintained. Since these engines power about 80% of all Special Light Sport Aircraft being manufactured today, we do well to listen.

Recently I had the opportunity to visit with Brian Meyerhofer, Engine Services Supervisor with Leading Edge Air Foils, LLC (LEAF), at the company’s facilities in Lyons, Wisconsin. LEAF, one of three independent Rotax Service Centres in the United States, is co-located with its sister companies of the Wag-Aero Group. Brian highlighted for me a list of critical installation, operation and maintenance issues he regularly sees causing problems for Rotax operators, which can result in expensive repairs and possible safety concerns. Let’s look at several of the most important.

Oversized props. Everybody wants to reach for more performance, and this is sometimes manifested in the installation of propellers, which are too heavy for the engine. The concern is that the propeller might exceed the “mass moment of inertia” limit for the particular model powerplant. The result can be hard starting and increased wear in the starting system, including damage to the sprag clutch. See Rotax Service Information 11 UL 91 for the details.

Over-pitched propellers. The 912/914 series engines need to generate a minimum of 5,200 rpm at Wide Open Throttle (WOT) in the take-off run. Too steep a pitch on the propeller can prevent this from happening. Over time, with multiple heat cycles, the result can be reduced engine life, including possible crankcase cracking. Don’t try to get more from your engine than it was designed to deliver. If you exceed the specs, expect to pay the price, one way or the other, eventually. Rotax Service Letter SL-912-016 explains the concern in depth.

Improper oil change procedures. Many problems come up under this general topic, and to deal with each in detail would be an article in itself. The most critical problems, however, have to do with use of improper oil filters, which have incorrectly set by-pass valves, allowing unfiltered oil to circulate through the engine, among other defects; improper oils not suited to the fuel being used; and improper practices when making oil changes. Any of these errors can result in engine damage due to lack of proper lubrication. Avoiding these problems is not difficult if operators would simply follow the Rotax and S-LSA manufacturer’s maintenance manuals. 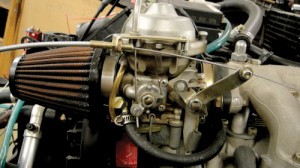 The dual Bing carburetors installed on 912 series Rotax engines work very well, but they must be set up correctly and maintained that way. As you can see, this is not a job for someone who does not know what they are doing. Proper training, tools and manuals is essential.

Improper carburetor, throttle and cable linkage set-up. The dual Bing carburetors on the Rotax 912 ULS do a good job of helping this small-displacement engine deliver its 100 horsepower, but they have to be set up correctly and maintained that way. If they are not synchronized accurately, or if the throttle and choke linkages are not adjusted properly, the carbs will not perform well, with hard-starting and less than maximum performance the result. While the set-up procedures are not especially difficult, they need to be performed by a properly trained maintenance technician with the proper equipment and tools available.

Incorrect ignition switch. Many S-LSA come from the factory with the familiar “off-left-right-both-start” ignition switches that we’ve seen for years on Continental- and Lycoming-powered aircraft. The problem is that these switches are not designed to handle the AC voltage used in the Rotax ignition system. This can cause various anomalies in the Capacitor Discharge Ignition (CDI) system, including erratic ignition and hard starting. These switches should be replaced with heavy-duty toggle-type switches rated for AC voltage.

No fuel return line. The possible problem here is, you guessed it, vapor lock, fuel starvation, and engine stoppage. This can be especially serious when using auto fuel, in a tightly-cowled installation, or in hot weather. Some S-LSA come from the factory properly set up with lines that keep fuel cool and circulating to the carburetor, but some do not. Check your set-up and consult a properly qualified maintenance technician if your engine installation does not have this feature. (A letter of authority (LOA) might be needed from the airframe manufacturer for this modification to maintain ASTM compliance.)

Brian Meyerhofer also mentioned several recent enhancements that further improve the 912 ULS installed in most S-LSA. If your qualifying engine has not yet had these minor modifications made, you are losing out on the benefit of these changes, and should get them done. The two biggies provide increased time between overhaul (TBO) and improved starting. Here’s the deal on these:

Increased TBO. If your 912 or 914 series engine was manufactured since the beginning of 2010, you already have a 2,000-hour TBO. But if not, your 1,500-hour TBO engine might be eligible for the 500-hour TBO upgrade with nothing more than replacement of the pressure relief plug screw and spring.  This is possible because, since 2006, all 912 and 914 crankcases have been manufactured with the improvements necessary to enable the higher TBO rating. The exact cut-off is made by serial number, so check Service Bulletin 912-057-UL for the specifics. 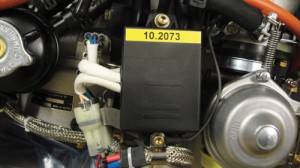 The new Advance Start Module (ASM) Ignition enables easier starts by retarding the spark until the engine is running. The yellow stripe on the CDI box installed on newer 912s verifies the presence of this improvement. Older engines can be modified to the new system fairly easily.

Advanced Start Module (ASM) Ignition. The “advance” in performance comes from retarding the spark to After Top Dead Center (ATDC) during start-up, and then reverting to the normal Before Top Dead Center (BTDC) settings after the engine is running. The result, of course, is easier starting. Standard on 912 series engines delivered beginning in January, 2010, this modification can easily be made to earlier 912s by replacing the two CDI black boxes with ones marked as part number 966-727, and replacing the flywheel hub. The newer engines with the improvements installed at the factory have a yellow stripe on the CDI boxes. Check to see if you already have this improvement on your 912 by checking the CDI boxes for the new part number. Further information is detailed in Rotax Service Information SI-912-020.

Magnetic Chip Plug. Not a big deal, but if you have not yet replaced the magnetic chip plug in your engine with the improved part, you should do so. Located above the oil filter at about the 1 o’clock position, the old style has a torx head, while the new style has a hollowed-out hex head.

In addition to covering these topics, Brian and I talked extensively about the use of auto gas versus 100LL avgas in Rotax engines. These engines were designed to run on the former, and are approved for auto gas containing up to 10% ethanol, but can be successfully operated on the blue stuff too. Fuel choice has a huge impact on oil selection and oil change practices and frequencies, as Rotax operators already know. But judging from service problems that Brian sees in the LEAF overhaul and maintenance business, perhaps a review of these issues would be worthwhile.  That’s a big subject, however, and will require a column all to itself. We will do that, and address other Rotax-related topics, soon.

Meanwhile, check out several websites that provide a wealth of Rotax maintenance and operation information, most of it free, starting with the LEAF website at www.leadingedgeairfoils.com. Engine manuals, along with Rotax factory training information and help finding a maintenance technician or repair center, can be found at www.rotaxflyingclub.com. Look for service bulletins and instructions at www.rotax-owner.com. Engine specifications are available at www.rotax-aircraft-engines.com, the factory website. Better yet, just give Brian Meyerhofer and the folks at Leading Edge Air Foils a call at 800-532-3462. Best of all, fly into the grass airstrip at Wag-Aero, near Lyons, Wisconsin, or their fly-in maintenance facility at East Troy Municipal Airport (57C). (Call ahead to check conditions and to let them know you are coming.)

I still really like my small Continentals, but the more I learn about Rotax engines, the more impressed I am with this very modern series of aircraft powerplants.