AOPA Summit 2011… Learning From The Past, Looking To The Future | Midwest Flyer – General Aviation Magazine

AOPA Summit 2011… Learning From The Past, Looking To The Future 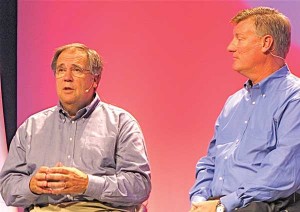 (L/R) AOPA President & CEO Craig Fuller and EAA President & CEO Rod Hightower making a joint announcement at the AOPA Summit that they plan to request an exemption from the Federal Aviation Regulations that would allow pilots flying on recreational flights to be permitted to use their driver's license medical standard, rather than a Third-Class FAA Medical Certificate.

HARTFORD, CONN. – Those who believe the old adage that you can’t mix business and pleasure are obviously not AOPA members, who have attended one of the organization’s annual “Summit” events. Going back to the days when these events were known as “Plantation Parties,” the annual gathering of members from all over the country and from AOPA branches abroad, have always been a perfect blend of fun and business. The three-day event offers opportunities to learn more about the numerous problems aviation is facing and what is being done to overcome those problems.

The special blend of camaraderie, which exists among members of the flying fraternity, is probably greater today than ever before, because of the issues and changes facing aviation. Our ongoing problems have drawn us closer together. The Summit offered special proof that the top aviation organizations, and even some enlightened members of Congress, are joining forces to present a united front in defense of aviation interests.

Aviation, which is no stranger to opposition from airport neighbors and government bureaucrats, is under attack today as never before. The latest is a proposal to levy a user fee of $100 on every business flight. Those in the aviation business are struggling, as are all businesses to survive in these tenuous economic times. Many businesses use aircraft to be more competitive, to help them stay ahead of the game. Instead of rewarding the companies working hard to be more competitive, the government is proposing to levy a tax on them which would make them less competitive and cost them sales, forcing them to reduce production and thus cut employment. And of course the bureaucrats would declare their program a success and propose it be expanded to the little guys who fly Cessnas, Pipers and Cirrus aircraft. AOPA is among those organizations, which have united in opposition to the user fee proposal.

The attitude of “all for one and one for all” was very much in evidence in Hartford, including a Saturday Pancake Breakfast where it was announced that AOPA and EAA are working together to ask the FAA to create an exemption that would allow private pilots to use the driver’s license medical standard with some limitations, instead of a third-class medical.

AOPA President & CEO Craig Fuller and EAA President & CEO Rod Hightower joined in making the announcement. It would be similar to the standard now used for sport pilots. Rod Hightower pointed out, “We have more than five years’ experience now with the Sport Pilot Certificate and the driver’s license medical standard. In that time we have not had a single medical incapacitation accident. The standard works.”

Craig Fuller noted, “Our petition would enhance safety by requiring initial and recurrent online training about health awareness and self-certification for any pilot choosing to use the driver’s license standard.” The two organizations expect to file their request for the exemption after the first of next year. It will be restricted to single-engine aircraft with 180 hp or less, four seats and fixed gear. It would be limited to day, VFR flights with one passenger. This would apply only to pilots flying recreationally.

Friday’s early morning keynote speaker was FAA Administrator Randy Babbitt. As he has emphasized many times before, he reiterated his commitment to “aviation safety.” He pointed out, however, that it is impossible to do any long-range planning with the continuous policy of short-term incremental funding. He emphasized the need to work with Congress to get long-term funding authorization passed.

The aviation community has been told over and over that the general aviation safety record is constantly improving. Babbitt took issue with that. We have too many general aviation accidents and too many fatalities. “We’ve got to get to the bottom of what’s causing these accidents,” he said. He pointed out, however, that while the accident record is not good, we still have the safest aviation system in the world.

Babbitt announced that he had just authorized the creation of a new Aviation Rule Making Committee to review the current flight training rules. The committee will be charged with making recommendations on how to improve on current testing and training.

Babbitt also emphasized the urgency of transforming ATC from a ground-based system to a satellite system. Satellite-based approaches are making aviation safer and more efficient, he declared.

Another big step in looking ahead to better days is Congressman Sam Graves’ effort to form a forceful and effective “General Aviation Caucus” in the House of Representatives. Graves was co-founder of the group along with Congressman Vern Ehlers who has since retired.

“I have 149 members so far,” said Graves. “My goal is 218.” This will give aviation a voice in Congress, which no one could have imagined only a few months ago. AOPA recognized Graves’ efforts by presenting him with the Joseph B. “Doc” Hartranft Award, one of AOPA’s two highest awards.

Congressman Graves participated in a U.S. Congress General Aviation Summit with Senator Mark Begich of Alaska, and Congressman Jerry Costello of Illinois, chaired by AOPA President and CEO Craig Fuller. If there was unity on anything at this Summit, it took place at this seminar. All three of the participating congressmen on this panel agreed that you have to get involved. “You have to participate,” Senator Begich told the audience. “You have to make the time to be engaged. There’s enough negative stuff going on to last a lifetime.”

Congressman Costello listed all the anti-aviation proposals now on the table: user fees, the BARR proposals, airport improvement funds, etc. “Push your interests forward, push the harassment back. If you don’t get involved, you can’t change anything,” is the way Sam Graves summed it up.

So much for the highlights of the business side of the Summit’s activities. Now just to summarize the other side of the coin. On opening night, Thursday, there were showings of two movies, “Memphis Belle,” and “Legends of Flight,” a film about the making of the first-ever carbon fiber airliner, the Boeing 787. There was also “A Night for Flight Benefit and Auction.” Among the auction items were dinner and a flight with Harrison Ford. Entertainment was supplied by a group, which has appeared with Cirque de Soleil, and the Metropolitan Opera. 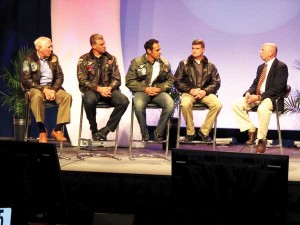 U.S. Navy pilots discussed their missions, past and present.

Friday featured a luncheon celebrating 100 years of U.S. Naval Aviation. Four carrier pilots recounted some of their experiences, one of whom – Captain Kent Ewing – logged 1104 carrier landings – 365 of them at night – and had to ditch twice in the ocean. The evening events included a “Dine Around” at which participants had dinner with top celebrities, including acclaimed air show performers and authors. And the final choice on the agenda was a “Rock ‘n Rally” featuring one of Connecticut’s most popular bands at Airportfest held at Hartford-Brainard Airport (HFD). 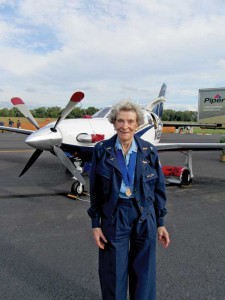 Bernice "Bee" Falk Haydu standing by a new Piper Meridian at Hartford-Brainard Airport, Hartford, Conn. Haydu was a Women Airforce Service Pilot (WASP) during World War II, and is a Congressional Gold Medal recipient, which she is proudly wearing in this photo. Haydu wrote a book entitled “Letters Home 1944-1945” detailing her life as a WASP and thereafter.

Saturday’s festivities began with a Pancake Breakfast featuring an exchange of ideas with AOPA President Craig Fuller, and EAA President Rod Hightower. The closing party took place at the New England Air Museum where a buffet dinner was served while Simply Swing – a 10-man big band era group and a female vocalist – offered favorite numbers of the ’50s and ’60s. The museum itself has an amazing collection of aircraft including a shiny B-29 and a four-engine Sikorsky flying boat.

One of the perennial highlights of the annual AOPA get-togethers are the numerous appearances by Rod Machado, who is as funny as any of the top comics in the business. He always appears in one of the bigger ballrooms and it’s always hard to find a seat if you don’t get there early. Rod is a flight instructor and an aviation author, as well as a great comedian. From the minute he starts his presentations to the minute his presentations come to an end, the audience is rocking with laughter. And his subject is always aviation.

And it should be mentioned that one of the great fun aspects of the convention is meeting old friends who always seem to have wild stories to tell, and making new ones. 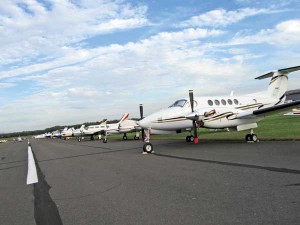 The flightline at Hartford-Brainard Airport (HFD).

Another highlight of the Summit is always a visit to the static aircraft display at a nearby airport, in this case Hartford-Brainard Airport, where there was everything from Light Sport Aircraft to a Cessna CJ4.

And a closing note on something unusual and memorable, which is reminiscent of the opening phrase of Charles Dickens’ “A Tale of Two Cities:” “It was the best of times. It was the worst of times.” 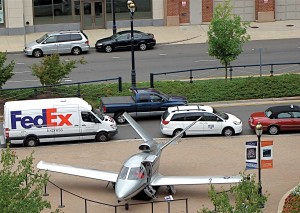 When we were searching for the parking facilities on our arrival at the Connecticut Convention Center, we spotted a strange vehicle parked right in front of the facility. It had wings and a jet engine on top of the fuselage. It was a Cirrus Vision SF50, a single-engine jet seeking FAA certification. How appropriate. Here was a symbol of American vision, ingenuity, technical expertise, and entrepreneurship. Here was a shining example of this nation’s capability, of its leadership in the world of general aviation.

When the Klapmeier brothers, Alan and Dale, undertook the development of a new brand of aircraft, the Cirrus, more than a few people thought they were out of their minds. A pair of upstarts thought they could take on the establishment? That they did. They developed and marketed a radically new aircraft that took over first place in the single-engine piston market.

But they didn’t stop there. They went on to develop a single-engine jet. But as everyone in aviation knows, that was not the end. It’s only the beginning. The really hard part is achieving FAA certification, and that takes money, a lot of it. They sought backers. Based on their incredible accomplishments, you would have thought there would be plenty of takers. There were none in the U.S., but China stepped up to the plate. They bought the company. Now all that American know-how, ingenuity, and market leadership belongs to China. And that’s the way it is.